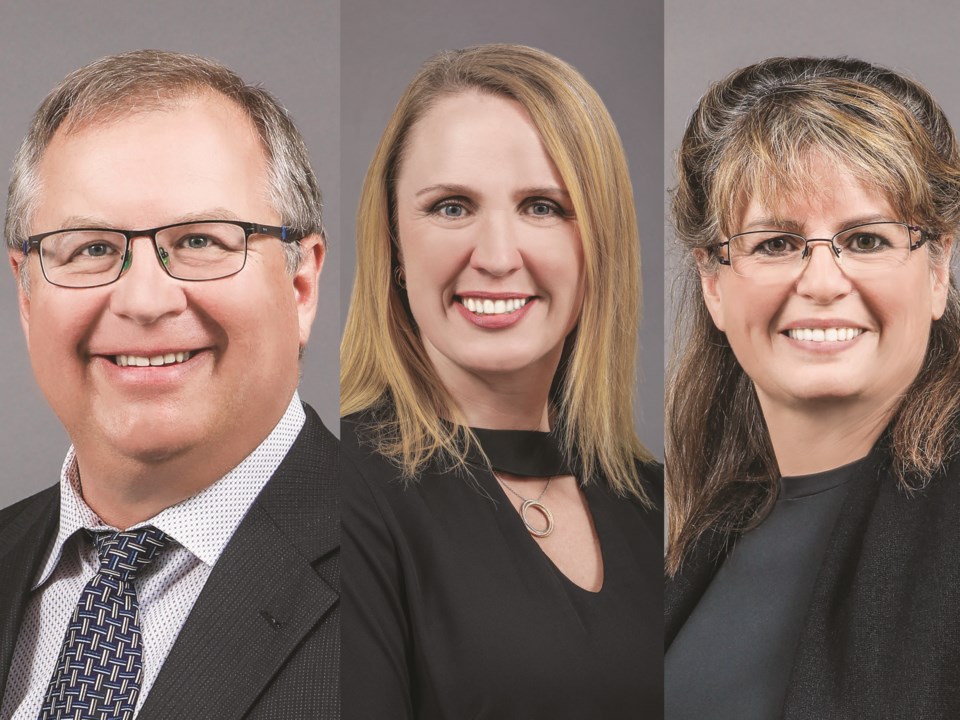 Councillors Kevin Hanson, Samanntha Wright and Crystal Kissel have filed an application with the Court of Queen's Bench of Alberta related to sanctions imposed on them in June. File Photo/Rocky View Publishing

According to an application filed with the Court of Queen’s Bench of Alberta Aug. 8, Couns. Crystal Kissel, Samanntha Wright and Kevin Hanson – referenced in the document as “the Applicants” – are seeking an order to set aside sanctions passed by council June 11, as well as sanctions they claim were imposed by Hoggan May 8. The application names both RVC and Hoggan as respondents, and “pertains to the actions of both RVC council and [Hoggan].”

“Hanson, Kissel and Wright believe the sanctions are an attempt to silence voices that are known for opposing the council majority,” the three councillors said via a Sept. 5 press release.

In June, the councillors were censured and sanctioned by their colleagues for breaching council’s code of conduct. As a result, they were removed from County boards and committees, slapped with a 30 per cent reduction in pay and directed to issue public apologies, among other sanctions.

Further, the application asserts the appointment of law firm Reynolds, Mirth, Richards and Farmer LLP to investigate complaints made under the code of conduct raised “a reasonable apprehension of bias,” and therefore, the findings of the firm – which led to the sanctions – were void.

The application also outlines an email the councillors received from Hoggan in May “in which he purported to impose restrictions upon the Applicants ability to communicate with the CAO and with RVC staff.”

Hoggan, according to the application, refused to meet with the councillors without an appointment being scheduled in advance and requiring the attendance of either the reeve or the deputy reeve. He also “forbid” Hanson, Kissel and Wright from communication with staff apart from him, and forbid staff from being present in meetings between Hoggan and the three councillors without the reeve or deputy reeve present.

There restrictions were not imposed upon other councillors, per the application, and “are hindering the Applicants ability to provide good government to their constituents.”

“The CAO sanctions, and the arbitrary way in which the CAO applies them, also interfere with the Applicants’ ability ‘to obtain information about the operation or administration of the municipality from the chief administrative officer,’ in contravention of…the [Municipal Government Act],” according to the application.

Ultimately, the councillors assert both Hoggan and RVC council “exceeded [their] jurisdiction,” and the resulting sanctions are invalid.

“The sanctions make it virtually impossible for us to do our jobs,” Kissel said via press release. “We were left with no choice but to challenge them legally.”

In response to the application, Reeve Greg Boehlke issued the following statement:

“Unfortunately, the practice for lawsuits allows the plaintiffs to make whatever public claims they like, but as defendants, we are restricted to making our case in court.

"Speaking on behalf of the majority of council, I can say we’re discouraged and disappointed by this move by sanctioned councillors Wright, Hanson and Kissel. At every stage, we have followed the Alberta Municipal Government Act and council’s own unanimously-approved Code of Conduct bylaw, and the County will vigorously defend our actions on this matter in court.”

According to Grant Kaiser, RVC executive Director of Community and Business Connections, the County and Hoggan would not comment further on the matter.

The application will be heard in court Oct. 10 at the Calgary Courts Centre.