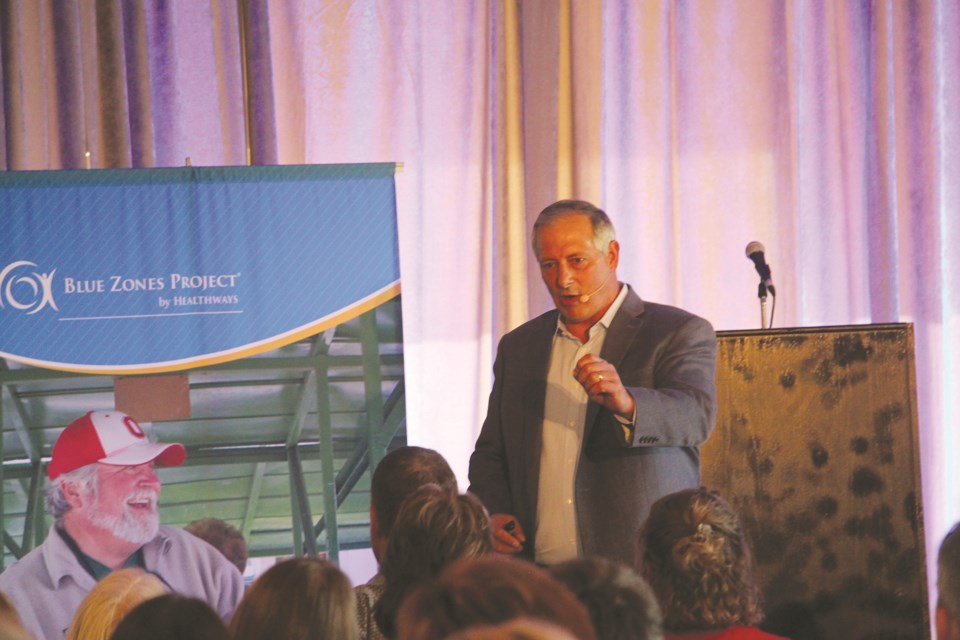 Blue Zones co-founder Tony Buettner spoke to a packed crowd at Apple Creek Golf Course May 14, 2018, encouraging the community to get on board with the healthy-living initiative. Following an announcement June 13, Airdrie's Blue Zones project will begin in September. File Photo/Rocky View Publishing

The City of Airdrie is continuing down the path to becoming Canada’s healthiest community with a June 13 announcement that a three-year Blue Zones innovation project will kick off in the city this September.

“This is attempting to put the spotlight on what we call the social determinants of health,” said Mark Seland, CEO of Abrio Health, originally the Airdrie and Area Health Co-operative. “Somewhere between 75 and 90 per cent of your individual health status has nothing to do with health care.”

However, Seland said, many of these social aspects of health fall within sectors that aren’t under the umbrella of the Minister of Health – like providing nutritious alternatives at grocery stores, restaurants, schools and workplaces, or ensuring communities are walkable. According to Seland, Blue Zones addresses this by using a municipality’s environment, policy, social, health and health-care networks to create a more holistic well-being initiative. The platform has already proven successful in more than 45 communities across the United States, he said, with outcomes including improved healthy life expectancy and reduced health-care costs.

“When all the different segments of the community are doing something similar at the same time, that’s where things start to happen,” he said.

The Airdrie project will begin with an eight-month “discovery period,” according to Seland, which will provide baseline individual and overall population health measures. Using that information, Blue Zones will develop an action plan catered specifically to Airdrie.

“Each community has its own set of pros and cons – maybe a community requires more bicycle paths or park space, or maybe there are regulations around smoking that need to be changed,” said Leon Cygman, an Airdrie resident who attended the announcement event June 13 at Apple Creek Golf Course. “Each community is different, and that’s for the Blue Zones people to come in and figure out what we’re like, what our rules are, and what our lifestyle is now.”

The evaluations have been fairly positive, he said.

“A lot of our community engagement about health has already occurred, so this community is actually a little bit further along than any of the others they’ve done,” Seland said. “They’re rating us as a very good prospect.”

Abrio Health will use the action plan to work with its community partners – including Alberta Health Services and Alberta Blue Cross – to implement the suggested changes. According to Cygman, this is likely to include small initiatives that will shift people’s focus away from unhealthy choices.

"If we're talking about today's health-care system, you can easily see an urgent care centre – it's a building. You can see a community clinic," Seland said. "When we're talking about things that are attempting to change culture, change individuals, attitudes and behaviours, they're not buildings. It's harder to see something tangible."

The original budget for the three-year project was estimated to be approximately $6.6 million, according to Seland, based on the larger categories of expenditures present in Blue Zones implementations in other communities – which includes paying for policy expertise, data collection, legal fees and brand strategy.

Costs will not be finalized until more specific details are established for the local project, he added, noting funding for the first few years has been secured through donations, grants and in-kind support from The Calgary Foundation, the City of Airdrie and more.

The City of Airdrie has demonstrated its commitment by promising $1.5 million to support the initiative, Brown said, providing Abrio Health with $500,000 per year over three years, along with one full-time employee for the three-year duration of the project.

But for the project to be a success, Seland said, it will require significant buy-in from the larger Airdrie community. For the city to earn Blue Zones status, he said, specific targets must be met – including commitments from at least 20 per cent of citizens, 25 per cent of the city’s public schools, 50 per cent of Airdrie’s “top 20” employers, 25 per cent of restaurants and 25 per cent of grocery stores.

“It’s a huge drawing card for Airdrie – it’ll put us on the map and set us apart and make us different from any other community in Canada,” Cygman said. “But people have to be committed to it. It’s a long-term strategy, so people will need to be patient and not expect that this investment is going to happen overnight.”