Airdrie will be the first municipality in Canada to become a Blue Zones Project healthy community, following a City council vote Nov. 5 to approve $1.5 million in funding to jumpstart the process.
Nov 15, 2018 12:01 AM By: Airdrie City View 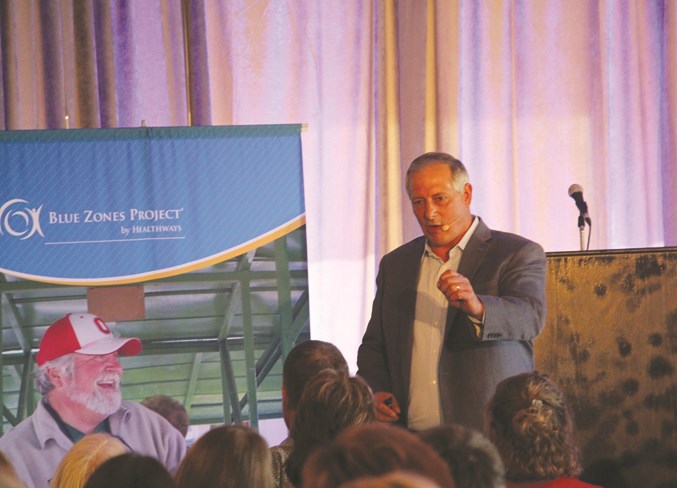 Tony Buettner, co-founder of Blue Zones Project, spoke to a packed crowd at Apple Creek Golf Course May 14 about how the organization can help Airdrie get healthier. Airdrie City council approved $1.5 million in funding Nov. 5 to help the group spearheading the project – Airdrie and Area Health Co-operative – move ahead with transforming Airdrie into Canada’s healthiest community.

Airdrie will be the first municipality in Canada to become a Blue Zones Project healthy community, following a City council vote Nov. 5 to approve $1.5 million in funding to jumpstart the process. "The greater Airdrie area has a unique opportunity to make a real difference in the health of everyone in the community,” said Airdrie and Area Health Co-operative (AAHC) CEO Mark Seland. “The AAHC is pleased to be working with the City on Blue Zones implementation to help us become Canada’s healthiest community." Resulting from National Geographic scientific research and similar models from the World Health Organization, Blue Zones strategies help shape the environment of communities, workplaces, schools, restaurants and food stores in a way that allows healthy choices to be made by individuals and the community as a whole, he added. “In areas from Japan to Sardinia to the United States, people in these rare Blue Zones communities around the world are living healthier, disease-free lives for years longer than in other comparable communities,” Seland said. Blue Zones uses what it calls the Power 9 principles to encourage people to live healthier lifestyles. These include having a sense of purpose, consuming more fruits and vegetables, putting loved ones first and keeping what it calls the “right tribe” around them – people who help to inspire and encourage. The principles are all things Blue Zones found to be common to the communities with the healthiest and longest-living residents. City council approved a request from AAHC of $500,000 per year for three years ($1.5 million in total) to assist the organization in bringing the Blue Zones philosophy to Airdrie. According to Seland, the City’s contribution will be used for hiring and training of local Blue Zones staff, ensuring each project team member is well versed in Blue Zones methodology, proven implementation processes, and outcome analysis and measurement. “An Airdrie Blue Zones office will be established [out of which staff will be responsible for] co-ordinating hundreds of volunteers to support implementation and public engagement,” he said. “[Funding will also be used for] policy development, impact and population health measurement, as well as marketing and social media, Blue Zones management and communications materials, outcome assessments and eventual certification of the community to be designated a Blue Zone.” Transforming Airdrie into a Blue Zones community will cost between $5.5- and $6-million, he added. AAHC is responsible for raising the additional funds. More information about Blue Zones communities can be found online – bluezones.com