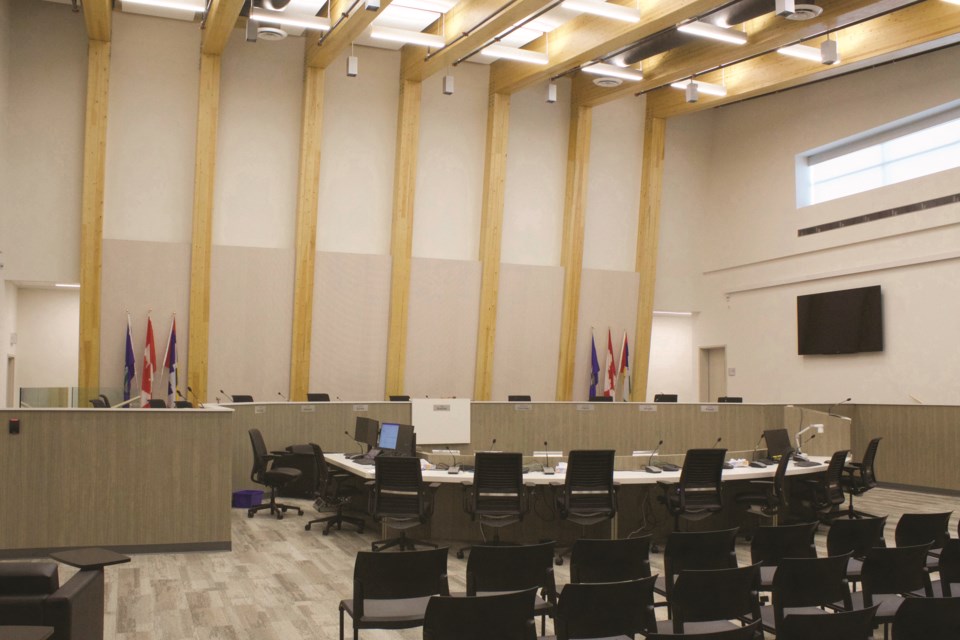 The motion by Coun. Crystal Kissel was originally adopted Sept. 24 by a vote of 5-4, with Kissel and fellow sanctioned Couns. Kevin Hanson and Samanntha Wright voting alongside Couns. Daniel Henn and Mark Kamachi.

At a regular meeting Oct. 8, Henn and Kamachi introduced a notice of motion to rescind the decision, saying “the majority of council have reconsidered their position,” and requested the issue be debated at council’s next meeting Oct. 22.

Henn said he’d reconsidered his previous position “due to the fact that Couns. Wright, Kissel and Hanson have not only failed to acknowledge the transgressions that brought about their sanctions, [but] they continue to perpetuate the idea that somehow they have been wronged [and] this council has acted in bad faith.”

Council voted 5-3 to approve the notice of motion, with Wright, Hanson and Kissel opposed. Coun. Kim McKylor was absent from the meeting.

According to Barry Woods, manager of Financial Services, the provincial government announced tax relief for the producers Sept. 17.

“Many shallow gas producers are in a difficult financial situation,” he said. “Some have become insolvent because of prevailing global market conditions and the impact of high operating expenses, including property taxes.”

According to Woods, the municipality will be reimbursed for property taxes through an education property tax credit in the 2019 year.

He said the policy will provide guidance for tax levy cancellations for two specific instances – fire damage, or properties that have a charitable purpose but are not registered with a not-for-profit organization and do not qualify for tax exemption.

The application received first and second reading at council’s Sept. 24 meeting, but did not receive unanimous permission for third reading at that time – Hanson voted against proceeding to encourage “sober second thought.”

According to planner Jessica Anderson, the yard will provide outdoor storage of vehicles, equipment, materials and other items for trucking businesses. Subdivision was not proposed, she added.

Kissel and Hanson both arrived late to the meeting and were not present for the vote.

The first, according to planner Andrea Bryden, creates a 2-acre parcel with a 2-acre remainder north of Calgary and Highway 566, on the west side of Sunset Ridge Drive.

Henn, the area councillor, moved to remove a condition requiring the applicant to submit a site-specific stormwater management plan because of the property's location at the top of a hill. Due to the topography of the land, Henn said he didn’t see the necessity of the assessment.

According to Gurbir Nijjar, supervisor of planning, the requirement was driven by RVC’s servicing standards, based on the size of the parcel and the density of the surrounding area.

Hanson, Wright and Kissel opposed the amendment, which was carried 5-3.

“Being at the high point of a hill is all the more reason to do a stormwater plan, because what goes off has to be what was there pre-development, and if you’re at the top of the hill, it’s going to go down,” Hanson said.

Hanson was also the sole vote against collecting the Transportation Off-Site Levy from only the new parcel and not both parcels – having voted similarly in the past, he said he wanted to remain consistent.

The second application, planner Oksana Newmen said, was a First Parcel Out that created a 70-acre lot with a 90-acre remainder south of Cochrane, north of Highway 8 and east of Highway 22.

Council voted 7-1 to approve the application, with Kissel opposed.