Non-Chestermere residents wanting to use the city's beaches will now have to pay an admission fee, the City’s council decided on Tuesday.
Jul 31, 2020 7:00 PM By: Kate F. Mackenzie 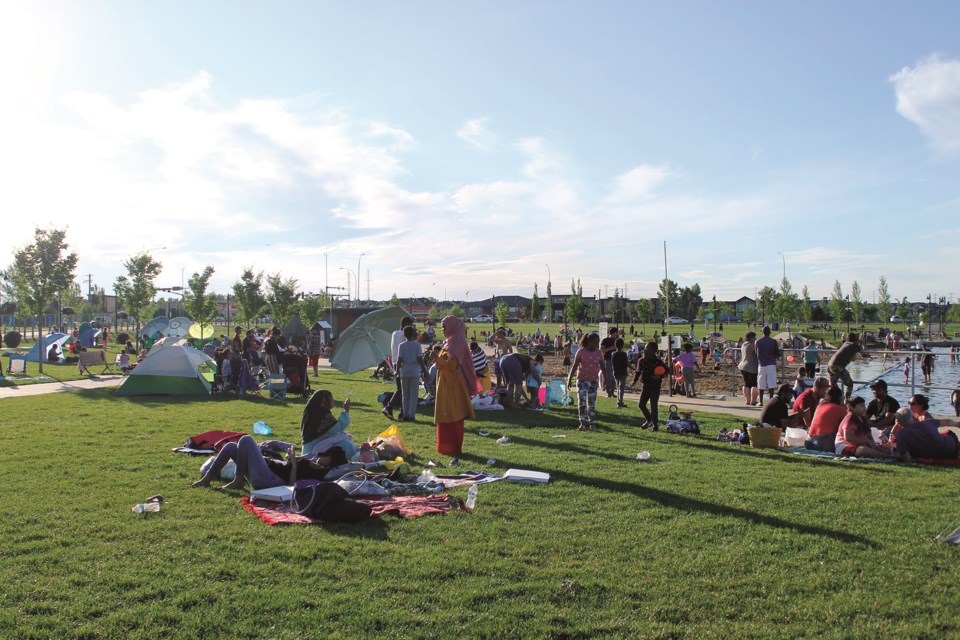 The beach at Anniversary Park in Chestermere has a new capacity limit of 115 people. Non-Chestermere residents will now be charged to use it. File Photo/Rocky View Weekly

Non-Chestermere residents wanting to use the city's beaches will now have to pay an admission fee, after Chestermere City council passed a new temporary beach use fee bylaw July 28.

The City of Chestermere recently implemented capacity limits at its three public beaches to address overcrowding and minimize the risk of spreading COVID-19. But according to Mayor Marshall Chalmers, enforcing these limits came at a cost for the municipality.

"Our main goal for 2020 is to keep people safe," he said in a press release. "We know that implementing capacity limits is the best way to ensure all beachgoers can have a safe and fun experience, but adding fencing and security is not free."

According to the release, to help pay for the new measures, non-residents older than 15 will have to pay $15 to access a public beach in Chestermere. Those between the ages of three to 15 will be charged $5, while kids under the age of three will get in for free. A family pass can also be purchased for $40.

As Chestermere residents already pay for the maintenance of the beaches, adding an admission fee for those who do not live in the city will help offset the costs of keeping visitors safe during this global pandemic, Chalmers said.

Prior to entering a beach, Chestermere residents over the age of 15 will need to provide proof of address with either a driver's license, school ID or a piece of mail. According to the release, an adult resident of Chestermere can also vouch for a youth's residency.

According to the City, once visitors have paid or been verified as a Chestermere resident, beachgoers will be given a wristband that allows access to any of the three lakeside parks that day, provided the park is not already at capacity.

"People with a wristband will be permitted to leave the beach area and return as they need, so long as the maximum capacity isn't reached," the release stated.

The new maximum capacity at Anniversary Park is 615 people, with 115 allowed on the beach, while the occupancy of Cove Beach is 205 people, and 39 people on the beach. Sunset Park, meanwhile, accommodates 483 visitors, according to the release.

Kayla Steyvers, a Strathmore resident, commented on Facebook that she often goes to the beach early in the morning, before it becomes busy.

“I was fine paying a fee, but this is a very large fee for the beach,” Steyvers said. “$40 an hour to take my kids to the beach for an hour? [That’s] harsh!”

Others felt differently. Victor Ukoh, a Chestermere resident, wrote on Facebook that the pricing will help reduce overcrowding.

“This is a good decision and should be looked at holistically,” he said. “Public health and safety should come first.”

Regardless of residency, any visitors who arrive at the beach when it's at capacity will need to wait or come back later. There is no time limit on how long beachgoers can stay once admitted. The release stated that if overcrowding continues, the City may further limit or close the beaches.

However, not everyone in Chestermere supports the new bylaw. The Chestermere Chamber of Commerce wrote and posted a letter to Chalmers and City council July 29, stating the chamber has concerns charging people to visit the beaches will impact the business community.

"Our businesses have already been impacted greatly with the COVID shut down and new restrictions," wrote Zane Southgate, the chamber’s president. "So putting any fee to the masses who visit the City, can and will negatively affect the traffic through the doors of our businesses.

"The Chamber feels it prudent to seek more consultation before making a last-minute decision that can [affect] more than 100 businesses directly.”

The fees are effective immediately and will stay in effect for the remainder of 2020. Chalmers said the City will review the bylaw's effectiveness at the end of the year.

"That way, we can ensure we are still following the best ways to keep our residents and visitors safe, even as they enjoy our city," he said.