People heading out to enjoy a day at a Chestermere Lake beach may have to go elsewhere if it’s reached its new capacity limits.
Jul 24, 2020 7:00 AM By: Kate F. Mackenzie 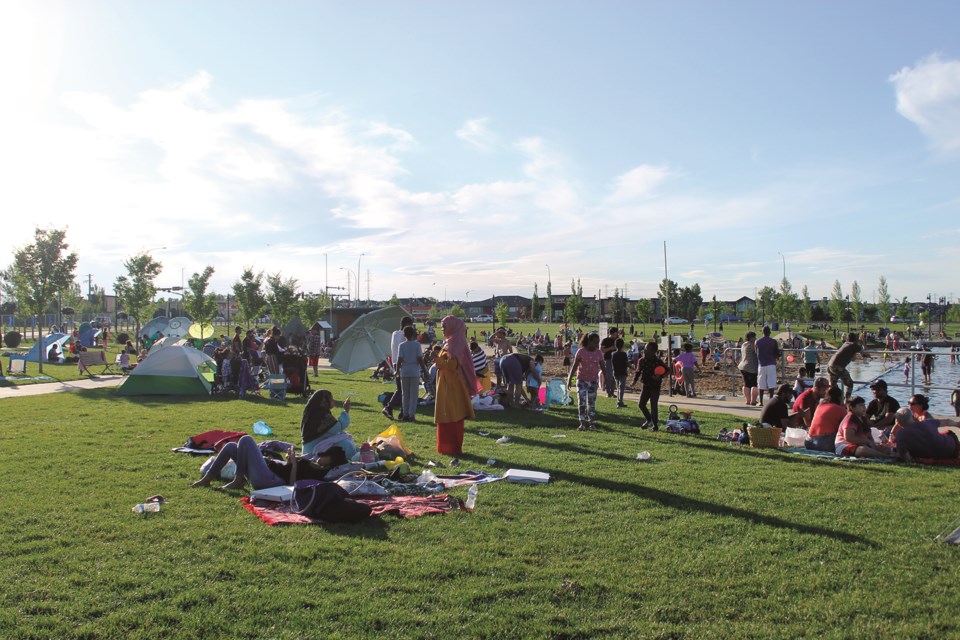 The beach at Anniversary Park in Chestermere saw crowds of people on July 18 come out to enjoy the nice weather. The new capacity limit of the beach will be 115 people. Photo by Scott Strasser/Rocky View Weekly.

People heading out to enjoy a day at a Chestermere Lake beach may have to go elsewhere if it’s reached its new capacity limits.

Past weeks have seen the city’s beaches “absolutely packed” and beachgoers “throwing caution to the wind,” according to Chestermere Mayor Marshall Chalmers. But, with the help of Alberta Health Services (AHS), the City now has a plan to enforce occupancy limits that keep the beaches limited to one person per every 16 square metres.

“We will have someone monitoring the number of people going in, and we know the capacity each beach can handle based on the area,” he said.

“Together, by demonstrating respect for each other and following the new occupancy limits and practicing strong hygiene, we can all contribute to a fun, safe, happy summer at the lake.”

According to Chalmers, the new maximum capacity at Anniversary Park will be 115 people, while Cove Beach’s updated occupancy will fit 39 people on the beach. Sunset Park, meanwhile, will be able to accommodate 483 visitors, according to the City’s website. www.chestermere.ca/1100/Beaches-Lakeside-Parks

“Ultimately, observation will tell us if one person per 16 square metres is working,” Chalmers said. “Or, if we have to decrease or increase [the capacity limit], or close it down altogether.”

Additional safety measures include clear markings for lineups to bathrooms and showers, increased signage, more hand sanitizing stations and limiting the number of people entering the washroom at a time. Washrooms and showers are already being cleaned and sanitized regularly.

According to the Alberta government’s statistics, as of July 23, Chestermere has 10 active cases of COVID-19. Chalmers said he does not know if any of the cases were contracted by people visiting the beaches.

Dr. Jia Hu, a medical officer with AHS in Calgary, said 16 square metres is equivalent to people keeping a two-metre radius – a health directive that has already been in place throughout the pandemic. Still, he said despite this oft-repeated protocol, people often cluster together.

In Toronto, Trinity Bellwoods Park has dealt with this by painting circles on the grass to remind people of social distancing, Hu said, but he acknowledged this method would be more challenging to do on a beach.

“We want people to enjoy the outdoors...but I think just be judicious and recognize that COVID-19 is still around and cases are rising,” he said. “ You can go to a beach, but if it’s super crowded, maybe go another day.”

The beaches will run on a “first-come-first-served” basis, Chalmers said, and there is no time limit to how long you can stay.

Residents and anyone coming from outside of Chestermere are strongly encouraged to have an alternative plan if the beach has reached its limit when they arrive, he said. The Twitter account @Chestermerepark will post when beaches and parks have reached their capacity.

Chalmers said if you do not practice physical distancing while at the beach, “you can be removed and [potentially] fined up to $10,000."

Although wearing masks in public spaces is not mandatory in Chestermere, Hu recommends wearing one if you go to the beach. He added people, particularly those ages 20 to 40, should recognize they’re not invincible to COVID-19.

“If you get COVID, you can spread it to your loved ones, like your parents, who have a much higher rate of getting seriously ill,” he said. “Take COVID seriously, but also have fun. You can do both.”