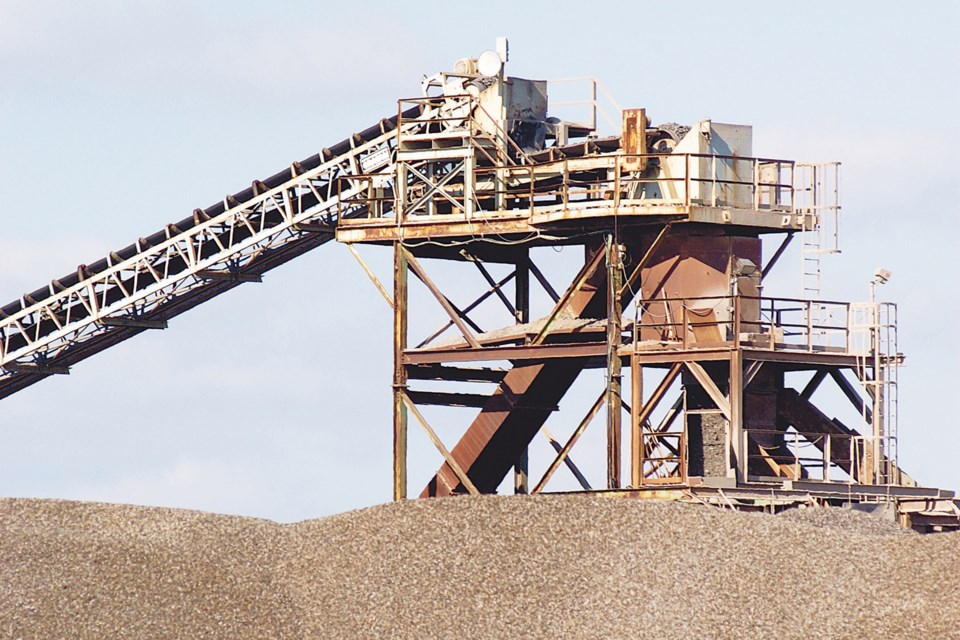 Following a decision by Rocky View County (RVC) council to cancel the creation of an Aggregate Resource Extraction policy at a regular meeting April 30, all future aggregate applications will be evaluated on their individual merits – essentially returning the County to its former process.

Mike Edwards, a Bearspaw resident who has kept a close eye on the issue, said he wasn't entirely surprised by council's decision, although he thought it was a missed chance.

According to Edwards, council’s decision means residents' certainty and peace-of-mind has been eliminated, and now the possibility exists that gravel pits could be approved in close proximity to residential areas. He added it's ultimately residents who will have to live with the dust and noise aggregate operations generate.

The road to council’s decision was long. A Terms of Reference (TOR) for an Aggregate Resource Policy (ARP) was originally approved by the previous council in April 2015, and revisited by that council in June 2017. Since 2016, three rounds of public engagement were held by RVC to obtain feedback from residents, industry and other stakeholders, and a draft ARP was released Feb. 23, 2018. County staff said they continually heard from residents an appropriate balance between the needs of citzens, industry and society had not been reached. Residents in opposition claimed the ARP did not protect their health, safety or amenity.

In September 2018, council rescinded the TOR – effectively killing a plan Reeve Greg Boehlke described at the time as, “probably one of the most divisive policies that I’ve ever dreamed would come here,” – and directed administration to develop a new Aggregate Resource Extraction policy and accompanying procedures by Dec. 2, 2018.

According to Municipal Clerk Charlotte Satink, administration presented a draft policy to the Policy Review Subcommittee Dec. 18, 2018, and the committee's feedback was incorporated into a revised draft brought back to the committee April 16.

“The committee agreed that given the deadline has already passed as per the Sept. 25, 2018, resolution, and the sensitive nature of the item, it is reasonable to request that council provide an extension of the time limit,” Satink said during the April 30 meeting. “Furthermore, the committee agreed that a CAO workshop would be beneficial to allow all of council to participate in the discussions.”

A motion by Coun. Samanntha Wright to grant the extension was soundly defeated 6-3, with only Couns. Kevin Hanson and Crystal Kissel lending their support.

“I think we’ve spent so much time on this, we’re going around in circles,” Deputy Reeve Al Schule said.

Coun. Jerry Gautreau – who originally proposed the Sept. 25, 2018, resolution – then moved to cancel the creation of the policy entirely.

According to Boehlke, while the intent behind developing an aggregate policy was good, the significant time – including public engagement – spent trying to draft the document revealed there was no path forward to find a policy that would satisfy everyone involved, especially activists he felt had obstructed a solution. It was therefore preferable, he said, to revert to the former process than to continue searching for a standard that had not been able to gain traction.

“I would stand up for that process anytime and say it worked perfectly,” he said. “To keep throwing money at a plan that’s being railroaded by a group of activists is just throwing good money after bad.”

According to Wright – who was a member of Rocky View Gravel Watch, a local advocacy group, prior to her 2017 election – the policy would have leveled the playing field for large and small operations while providing residents with a “reasonable level of expectation” as to where gravel pits could be located.

Cancelling the project essentially returns RVC to a method of approving aggregate pits she said residents were not satisfied with.

“The ARP…was identified as a need in the County Plan, which means people – long before I was elected – identified there was a problem with potential gravel extraction,” Wright said. “They wanted a policy that would clearly delineate that. So, now, we’re going back to the process that our community already told us they didn’t like.”

Wright, Hanson and Kissel were the only councillors to vote against Gautreau’s motion to cancel the creation of a policy, which was carried 6-3.

Going forward, each aggregate extraction proposal will require a Master Site Development Plan, according to Executive Director of Community and Business Grant Kaiser. Each proposal will also need council’s approval for land use redesignation through a public hearing, which Boehlke said would allow the public to provide feedback on the applications.