The Airdrie Chamber of Commerce and the Calgary Flames announced a new partnership Feb. 1, which will support two Airdrie charities.
0
Feb 7, 2019 12:01 AM By: Scott Strasser 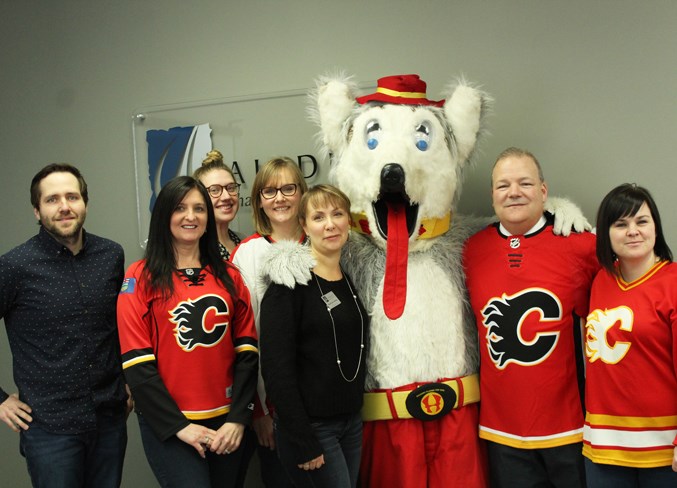 The Airdrie Chamber of Commerce and the Calgary Flames have struck a new partnership in support of the Airdrie Food Bank and North Rocky View Community Links. A portion of ticket sales from the Flames&#8217; March 29 home game will go towards the two charities.

The Airdrie Chamber of Commerce and the Calgary Flames announced a new partnership Feb. 1, which will support two Airdrie charities. The Flames’ March 29 home game against the Anaheim Ducks will be deemed Airdrie Family Night, with a portion of ticket sales being donated to the Airdrie Food Bank and North Rocky View Community Links. “We wanted to reach out and see how we could bring everyone from Airdrie to one of our games,” said Emma Portsmouth, a group sales account executive with the Calgary Flames. “We want people from Airdrie to be walking around the concourse that night and they see their neighbour, or someone they see at the grocery store. That’s the environment we want to create around the ‘dome.” For the game against the Ducks, $5 from each ticket purchased through the Airdrie Chamber of Commerce’s website or at Calgaryflames.com/airdrie will go towards the two charities. Tickets, which will cost $39, will be for press-level seating (third level) and will be sold on a first-come-first-serve basis. “It’s a nice rival game,” Portsmouth said. “Those are always the best games. And it’s a Friday night game, which makes it a bit easier for families.” Marilyne Aalhus, the executive director of the Airdrie Chamber of Commerce, said the partnership will be a win for the city, and a chance to fill the Scotiabank Saddledome with fans from Airdrie. She added Airdrie Family Night will be similar to the partnership the Rotary Club of Airdrie has with the Calgary Hitmen. Known as Airdrie Day, that partnership sees the Western Hockey League team dedicate a portion of ticket sales from one of its home games each season to Airdrie charities. “It’s kind of the same concept,” Aalhus said. “The Hitmen, of course, is a lower price ticket and a different kind of game. We’re bringing it to the NHL level, which is very exciting. Ticket prices are a little more, but it also gives people the opportunity to get out and watch the Flames.” Portsmouth said the partnership will allow the Flames to improve its engagement with Airdronians. “We know we have a lot of season-ticket holders in Airdrie, and we wanted to be able to give back,” she said.