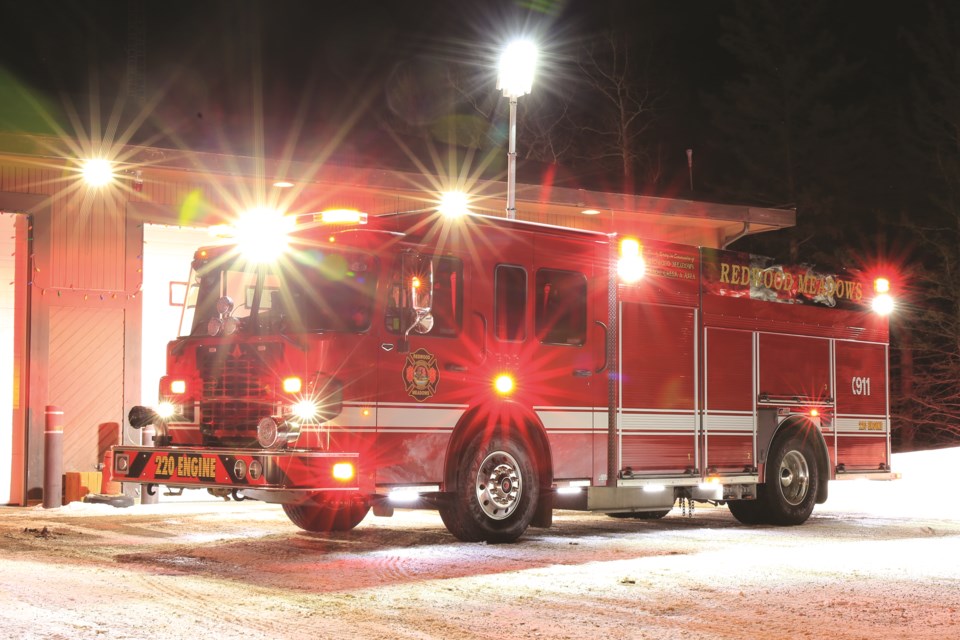 Redwood Meadows Emergency Services (RMES) is excited about its latest piece of equipment ­– a brand new pumper – and how it will help keep residents in the area safe.

“It’s going to protect our community well into the next 20 years,” Fire Chief Rob Evans said.

With the keys to the new vehicle in hand, he said the department has reached the culmination of a lengthy process.

“We started the planning phase about two years ago, and throughout that first year, we invited different manufacturers to give us their specs based on what we asked for,” Evans said.

RMES eventually chose Fort Garry Fire Trucks in Winnipeg to build the custom pumper, Evans said. The vehicle was ordered Jan. 29, 2019, and exactly one year later, it was delivered.

Unlike the other trucks in RMES’s fleet, the new pumper is equipped with airbags, which will keep firefighters safe during transit to emergencies, Evans said.

The pumper also features an intake on its front bumper that can draw pooled water in tighter spaces, allowing crews to set up closer to the fire. The fire pump has also been increased, meaning it can discharge more water. Hoses are colour-coded, Evans added, which lets pump operators efficiently control how water is discharged.

RMES is now equipping the truck and training its members on how to use it.

“It is different than our other truck,” he said. “It’s a cab-over design – the cab is over the engine, is what that means – so it’s a little bit different to drive. We want to make sure our operators know how to drive it [and] they’re comfortable operating the features in it, as well.”

The training includes 100 kilometres of driving before firefighters are certified to operate the pumper, along with modified firefighting tactics to use the vehicle’s equipment.

“We don’t want to grandfather anybody because this is new,” Evans said. “We just want to do our due diligence and make sure everybody’s comfortable in it.”

The truck is funded using provincial Municipal Sustainability Initiative (MSI) dollars and will be financed over five years, he said. This will allow the pumper’s $631,000 price tag – for the vehicle and accompanying equipment – to be paid down gradually while also making room for other programs in the community to benefit from MSI funds.

The department’s second-newest pumper is now 10 years old, Evans said, and the new one replaces a 43-year-old vehicle RMES has used since 1997. That pumper will be kept for training purposes, he added.

Evans said RMES crew members are reserving their excitement about the new equipment, but it’s obvious they’re happy to have the pumper.

“This is like Christmas, really,” he said. “That’s how it’s been described by some of our past members.”

The department has plans to showcase the new pumper, along with renovations to its station, sometime in April, Evans said – once the weather is milder and the truck has been fully incorporated into the fleet.

“This is the community’s truck,” he said. “When I say community, we’re contracted out – we don’t just provide service to Redwood Meadows. Bragg Creek is our community, Tsuut’ina Nation is our community. We protect Kananaskis…. We want the public to come out and take a look at this truck and see what we’re very proud of and find out how we protect their community.”