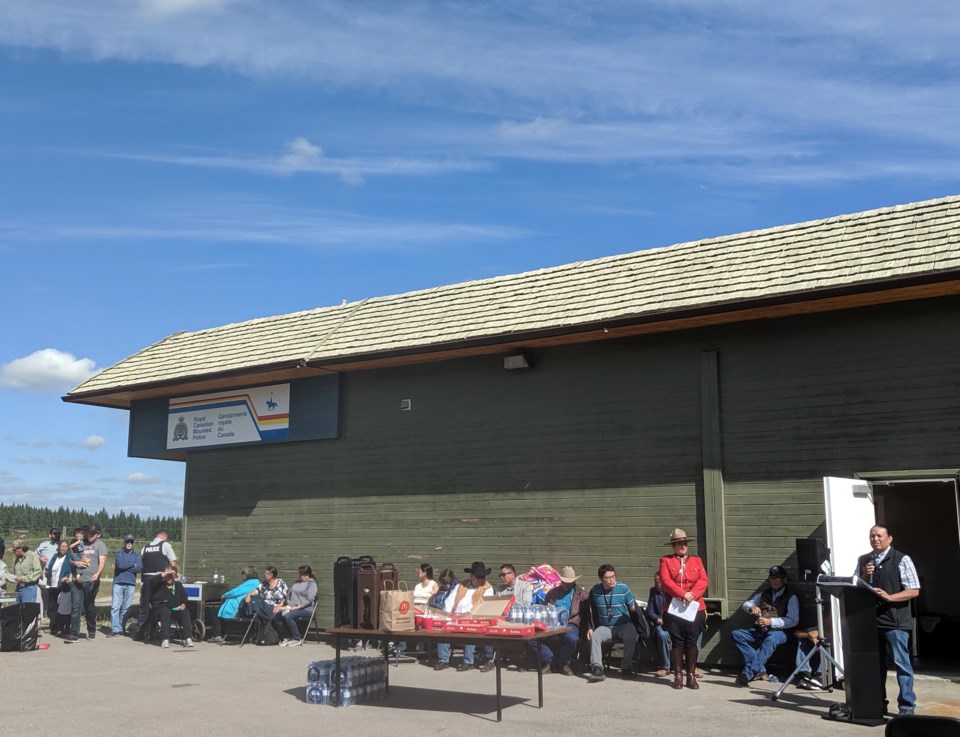 Stoney Nakoda Elder Una Wesley almost didn't have the will to live after her grandson was murdered.

Kori Wesley was 21-years-old when he was stabbed more than 20 times and his body was left at the Chiniki Rodeo Grounds, found on Aug. 7, 2016.

Two men, including a youth, from the Stoney Nakoda Nation were charged with second degree murder in the days following the discovery of Kori's body.

Then, a little more than a year after her son's body was found, Kori's mother and Wesley's daughter, Lori Wesley, died in October 2017 from heart failure. The family attributed her death to a broken heart.

Both men ended up pleading guilty to manslaughter in late 2018, but Wesley said she had a difficult time coping.

"These people gave me the hope to go on," she said to the police at the unveiling celebration of the new RCMP satellite station for Stoney Nakoda on Aug. 29. "So I thank you."

Wesley was just one of the speaker at the sunny celebration. Her words echoed similar statements made by chiefs, councillors and other elders – the new police station is necessary and will be vital to the community.

"This idea was brought forward and talked about because there was a need," Chiniki Coun. Jordie Mark said . "You have to have a peace of mind, and today I have that."

In partnership with the Cochrane RCMP, the Cochrane and Area Victim Services and the Stoney Nakoda Nation – home to the three bands, Chiniki, Wesley and Bearspaw – the station will now give Nation members the opportunity to give statements and have access to victim services programs in their own community.

Before the opening of the satellite location, Stoney Nakoda residents would have to travel more than 30 kilometres to Cochrane or Canmore to report a crime or access victim services. Now, the new station sits adjacent to the Chiniki gas bar, located off of the Trans-Canada Highway, only three kilometres south of the Morley town site.

"In the past, we as young children feared the RCMP, but today is totally different. We have to work with them for a safe community, [and] I know in the future, we will benefit from their services," said Wesley Chief Clifford Poucette.

On a Nation that suffers intergenerational trauma from residential schools – brought into Canada to assimilate Indigenous children during the 19th and 20th century and well documented as places of physical and mental abuse – there are a variety of issues in the community of 4,000 to 5,000 residents from addiction to poverty to domestic violence to homicides.

The RCMP acknowledged the opening of the new station was a way to continue reconciliation.

"[The] Cochrane detachment has a rich and evolving relationship with the Stoney Nakoda First Nations, and we are committed to continue building and improving our relationship with our community partners," said Cochrane RCMP Staff Sgt. Dave Brunner.

In addition to the new station, Cochrane RCMP has two Community Tripartite Policing Agreement (CTA) members, dedicated to spend 100 per cent of their working hours to policing on the First Nation.

The chiefs and councillors spoke of former tribal policing and other satellite RCMP locations that ended up closing down, but said this time is different.

"We had tribal policing in the 1990s and I was thinking, 'why didn't work?'" Mark said. "I believe in teamwork...we have always had a mutual respect with the RCMP and now we need to work together – that is how we will succeed."

Although the station does not currently have set office hours, the CTA members and the victim services Indigenous outreach specialist will open the gate when onsite, signally the office is open.

About the Author: Jenna Dulewich