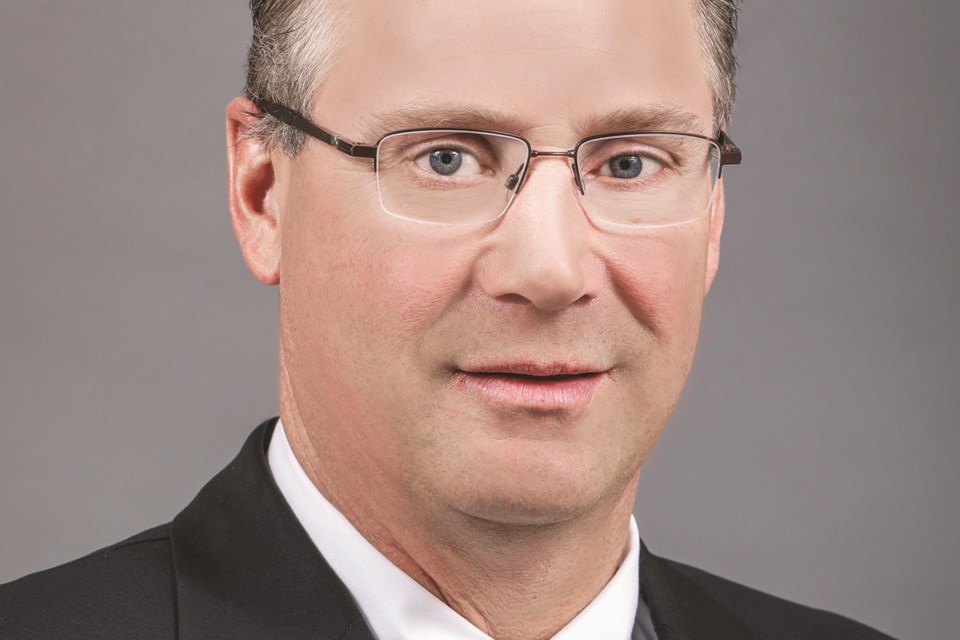 Coun. Daniel Henn was appointed the position of reeve of Rocky View County at the annual organizational meetinng Oct. 27.

At council’s annual organizational meeting Oct. 27, Coun. Daniel Henn was appointed to the position by his colleagues. This is Henn’s first time serving as RVC’s Chief Elected Official.

Council’s organizational meeting takes place every October. During the meeting, council appoints its reeve and deputy reeve for a one-year term, sets its meeting schedule for the year and makes a number of appointments to boards and committees.

Henn was nominated for the role by his predecessor, Coun. Greg Boehlke. After county staff announced Henn had been appointed by secret ballot, he thanked Boehlke for serving as reeve during the last five years.

“You have been a mentor to me, and a good friend,” Henn said. “I also have to thank my fellow colleagues for the support.”

Boehlke was nominated for another term as reeve by Coun. Al Schule, but turned down the nomination. Coun. Crystal Kissel was also nominated, by Coun. Kevin Hanson.

Following the meeting, Henn told the Rocky View Weekly the job comes with a lot of responsibility, but he is ready for it. He added his main goal is to come at council with a new approach and see if there is an opportunity to operate as a more cohesive unit.

“I don’t think it is any secret that there is a little bit of division with this council,” he said. “Maybe I am being naïve or it’s wishful thinking, but I would sure like to attempt to get this council working together a little better.”

Henn thanked Boehlke for graciously stepping down from the role he’s held since 2015 and for recognizing “the fact that someone else needed experience.” While reiterating Boehlke was a friend and a mentor, and emphasizing he did not want to appear critical, Henn said his own approach to the position will be different.

“His methods of communicating didn’t sit well with some people,” Henn said. “There is a very wide variance in opinions with council in how developments should occur and how decisions should be made. I think I may bring to the plate a little more of an open mind when it comes to respecting those opinions.”

Boehlke, meanwhile, said he was ready to step down from the role, although the change will take some adjustment.

“I am happy that Henn was willing to step up,” he said. “It is a high-stress job. I have been very lucky to work with the people that I have. We have had some good times and some trying times, but overall, we have done some great things for the County.”

The decision to turn down the nomination, according to Boehlke, came after almost two years of conversations with council.

“I had let council know that if the time was right, I would move on and go back to being a councillor,” he said.

Boehlke pre-empted speculation by saying he isn’t certain whether or not he’ll seek re-election in the 2021 municipal election. He added he is looking forward to adjusting to the workload and being able to spend more time with family.

Coun. Kim McKylor was appointed Deputy Reeve for the first time in her first term on council. McKylor was nominated by Schule, who served in the role for the last two years. Kissel was also nominated for the position by Coun. Samanntha Wright.

Mckylor said she is grateful for the opportunity.

“This wouldn’t be possible without the support, guidance and mentorship from Boehlke and Schule,” she said.

Coun. Jerry Gautreau was named chair of the Municipal Planning Commission (MPC), with Schule appointed vice-chair. MPC is comprised of all members of council, and all nine councillors were appointed to the commission. Notably, this is the first time Hanson, Kissel and Wright will sit on MPC since it was established in December 2019, as sanctions prevented them from sitting on RVC’s boards and committees. Those sanctions – which would have expired at the October organizational meeting – were set aside by a Court of Queen’s Bench of Alberta judge in July.

McKylor was named chair of the Recreation Governance Committee, a position she’s held since October 2019, shortly after the committee was formed. Schule was named vice-chair.

Boehlke will take over as chair of the Agriculture Service Board (ASB). Henn, McKylor and Wright were also appointed to the board.

Several members of the public were appointed to bodies, including the FCSSB and the ASB. Prospective members submitted applications in advance to be considered for the posts.

A full list of appointments can be found at rockyview.ca.