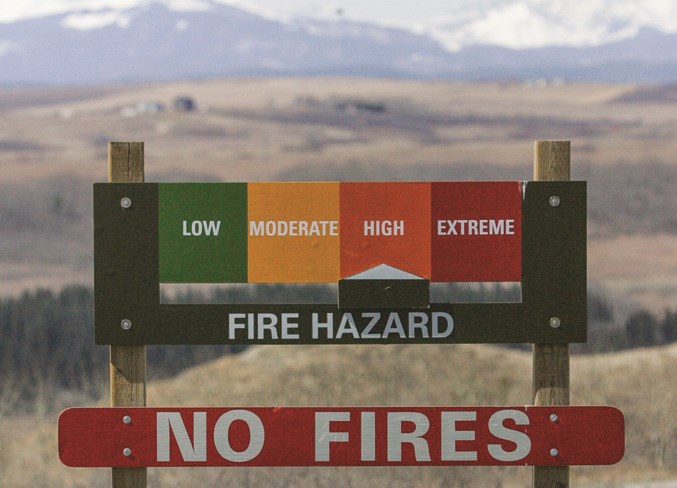 After extended hot and dry weather, a complete fire ban has been issued for Rocky View County. The fire ban will remain in place until a period of sustained rain comes to the county.

As of Aug. 9, Rocky View County (RVC) has been placed under a full fire ban, due to hot and dry weather conditions in the area. “We went to a fire advisory [Aug. 1], where we stopped writing permits for large fires – we allowed campfires,” said Randy Smith, RVC Fire Chief. “But the amounts of rain we’re getting, four hours after [it rains], it’s dry again, so we went to a full ban.” Under the fire ban, County residents are prohibited from having campfires or outdoor burns. Indoor fireplaces, gas fireplaces and barbecues are still allowed. Smith said the determination was made by observing current weather conditions and taking cues from neighbouring municipalities. According to albertafirebans.ca, the Town of Cochrane, Kneehill County and MD of Foothills were also under fire bans as of Aug. 15. At that date, Wheatland County was under a fire restriction, and fire advisories were active in the City of Chestermere, Mountain View County and the Calgary Forest Area. According to Smith, although it has frequently rained in the evenings, it's been some time since RVC has seen a sustained rain that significantly dampens the area. The rain the county has seen dries out quickly, he said – often within four hours – creating conditions ideal for fires. “It has sprinkled a number of times, or we get a downpour and it gets the ground wet, but there’s really not been a sustained rain for eight hours,” he said. RVC Fire Services has seen many grass fires spark up recently, Smith added, caused mostly by lightning in the Irricana area. “August is a bad time. As we get into September, it seems to dry out all the green grass,” he said. “We’ve gone through the whole spring green-up, and now, things are starting to die off again. It is a normal time to have a high fire hazard.” The ban will be lifted when the county sees sustained rain lasting between four to eight hours at a time, Smith said. Likely, that won’t be until at least September. In the meantime, Smith admonished residents to take the ban seriously. “This is the time of year when we really ask people to be vigilant,” Smith said. “People should be vigilant, be fire safe and be conscious of their actions. What might seem trivial at the time can ramp up very quickly and have long-term impacts.” According to Smith, violating the ban can result in a visit from the fire department and municipal enforcement, and could lead to a ticket. If the fire department gets involved because a fire you’ve started has gotten out of control, Smith said, you could be required to pay for the fire trucks and personnel that arrive on scene. “It’s not better to ask forgiveness, because forgiveness can come with a significant price tag,” he said. Smith added anyone tempted to contravene the fire ban should consider the possible impacts to themselves and their neighbours, which could include significant loss of property. During the current conditions, fires can quickly get out of control because of wind, he said, even if the blaze is monitored.