This February, Rocky View County (RVC) has been conducting a blitz in Langdon to educate residents on how to follow guidelines for garbage and recycling carts.
Feb 26, 2019 12:01 AM By: Ben Sherick 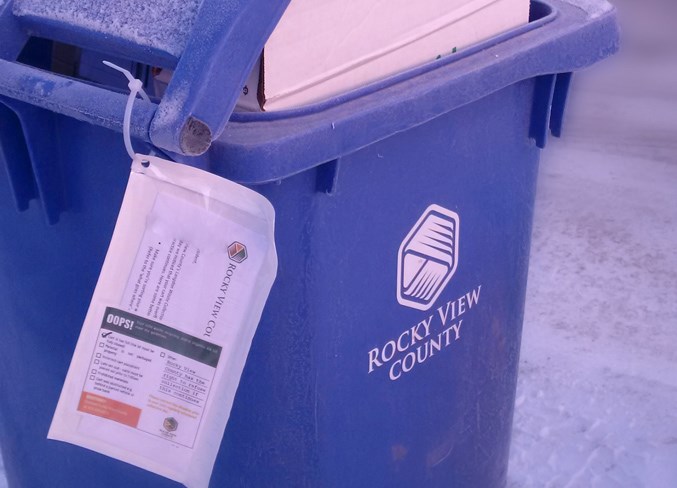 Rocky View County has been attaching notices to garbage and recycling carts in Langdon that are overfilled or otherwise not complying with the bylaw.

This February, Rocky View County (RVC) has been conducting a blitz in Langdon to educate residents on how to follow guidelines for garbage and recycling carts. “We were seeing a large amount of carts in Langdon that get collected at curbside that weren’t in compliance with the bylaw,” said Jennifer Koole, RVC’s lead solid waste and recycling advisor. “Specifically, we were starting to see more and more overfilled carts.” Overflowing carts increase collection costs for the entire community, according to rockyview.ca, and heightens the possibility of litter and attracting wildlife. According to Koole, the blitz was meant to remind residents of their responsibility to follow the guidelines of the program, and educate residents where they might not be complying. “It’s not just about the letter of the bylaw, but really wanting to make sure that people are informed of the proper way to sort, and the opportunities they have to keep materials out of the landfill,” she said. Prior to waste collection Feb. 7 and 14, a solid waste advisor from the County drove through each Langdon neighbourhood and looked for carts that were not following guidelines, Koole said. The advisor affixed notices to any non-compliant cart outlining what was wrong, she added, and residents were provided with a letter with the same information. In addition to overfilled carts, Koole said the waste and recycling team was looking for other non-compliance issues, such as improperly packaged materials, leaving the carts too close to vehicles or setting the cart out too late in the day. However, the majority of the issues the team saw were related to overfilled carts, she said. “The first week we did the blitz, we gave out 50 notices – we call them Oops Tickets,” Koole said. “Forty-nine of those were related to overfilled carts, and one was about improperly placed carts.” By the following week, Koole said, staff saw “a dramatic improvement,” handing out only 13 Oops Tickets with zero “repeat offenders.” That improvement shows people are learning through the cart blitz, she said, and taking the feedback from RVC to heart. “We want to give a particular shout-out to the Boulder Creek community, [which] went from 22 tickets in the first week to only two in the second week,” Koole said. She noted it is especially important in Langdon residents don’t overfill their carts, since the program is run on a subscription basis – families pay different rates depending on the size of their cart. While the first two weeks of the blitz focused on educating Langdon residents, Koole said RVC will conduct a third blitz Feb. 28 – on that day, any carts not in compliance will not be collected. “We’re not out there to be the ‘garbage police,’” she said. “We want to make sure everyone’s participating in the programs to maximize their value and their efficiencies, and as well to make sure we’re utilizing our diversion programs to their maximum potential.”