Rocky View County (RVC) council has requested the provincial government halt progress on the Springbank Off-Stream Reservoir (SR1) project and re-evaluate its options, following a decision at a regular meeting Dec. 11.
Dec 18, 2018 12:01 AM By: Ben Sherick 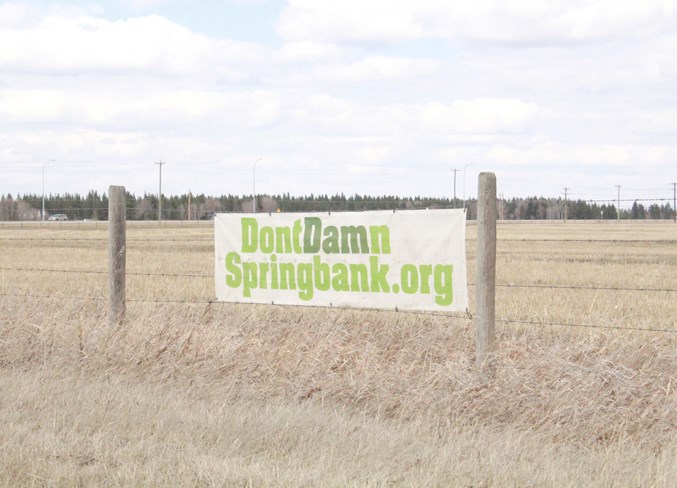 Rocky View County (RVC) council has requested the provincial government halt progress on the Springbank Off-Stream Reservoir (SR1) project and re-evaluate its options, following a decision at a regular meeting Dec. 11. “We’re here to represent the people of RVC, but on the greater sense, I believe we are here to represent the taxpayers of Alberta, as well,” said Reeve Greg Boehlke. “When we’re talking half a billion dollars with a lot of contingency in it, this is a lot of money and it should be done right. There is way too many questions on this project.” In a report to council, Richard Barss with the County’s Intergovernmental Affairs outlined how SR1 impacts are placed on RVC – specifically, the residents of Springbank – and Tsuut’ina Nation, with no mitigating benefits. He added alternative solutions were not given the same level of technical evaluation, resulting in a skewed cost/benefit comparison and the premature dismissal of other options, such as the McLean Creek (MC1) alternative. “Really, there are no local benefits for Springbank residents and there are no local benefits for the Tsuut’ina Nation, which is very close to the diversion point of the dam,” he said. According to Barss, the project would result in the loss of 3,870 acres of high-quality ranch land, impact 87 residential homes located on or near the reservoir site and shut down Camp Kiwanis. The project is designed primarily for the benefit of Calgary, he added, and any positive impact of SR1 within the County would be limited to about 10 houses downstream of the dam. The cost/benefit between SR1 and MC1 has narrowed over time, according to Barss – the gross cost of SR1 was most recently estimated at $432 million in May, while the approximate cost of MC1 was calculated at $406 million. A net cost of $372 million for SR1, he said, assumes successful resale of land around the reservoir. Other options, he added – including a Priddis diversion and water storage on Treaty lands, suggested by Tsuut’ina First Nation – were also not sufficiently considered. “What this report concludes is the options were prematurely dismissed in this process – perhaps understandably so, but it was a quick process to result in a solution,” Barss said. “In the review of the literature and talking with technical experts, County administration reached the conclusion that not all options were equally evaluated.” Further, Barss said, consultations with residents – specifically the First Nation – had not been adequately carried out, which could result in “significant delays” if any legal challenges are brought forward as the project moves ahead. Council voted unanimously to send a letter to the province stating RVC cannot support SR1 in its current state, and requesting the province halt the project so all options can be fully considered. “We got elected to represent RVC and our residents, and at the same time, we need to wear another hat – and that’s our regional partnership, and [getting] along with Calgary,” said Coun. Kim McKylor. “I don’t think there’s anybody in this room that would doubt that Calgary needs flood mitigation…but our job is to represent our interests and our residents’ interests.” However, Calgary Mayor Naheed Nenshi called council’s decision “irritating” and “irresponsible in the extreme” in a video provided to the Rocky View Weekly by the mayor’s office. According to Nenshi, five years of work on the SR1 project has included extensive public consultation and multiple scientific studies showing the project “is the right choice.” “Let’s not forget that five people died in [the 2013 floods],” he said. “Let’s not forget that there was $6 billion of damage to the city of Calgary, and let’s not forget that every single person in this region requires a healthy city of Calgary economy and a healthy downtown Calgary for their own livelihoods.” Nenshi remained confident RVC’s letter would not ultimately sway the provincial government. However, he indicated council’s decisions could have future regional impacts. Nenshi accused RVC of playing “political games,” and said the County has demonstrated it is not interested in being a good regional partner. “We have a new metropolitan region board,” he said. “We’re talking about everything from transit to water to regional planning. To pull a move like this really indicates to me the County’s not serious about that, and I’m going to need to see some real good faith on their part before I’m willing to enter into spending a lot of time and money on negotiations with them.” Boehlke said he wasn’t overly concerned about negative repercussions from the decision when it comes to future regional co-operation. “If Calgary chooses to make it an issue, unfortunately, I guess we’ll have to deal with that as it comes up,” he said. “If it does [become] an issue…it won’t be RVC that is instigating it.”