A cougar was spotted near the Cochrane RancheHouse Aug. 20, prompting the Town of Cochrane to report the sighting to Alberta Fish and Wildlife.
Aug 28, 2018 12:01 AM By: Scott Strasser 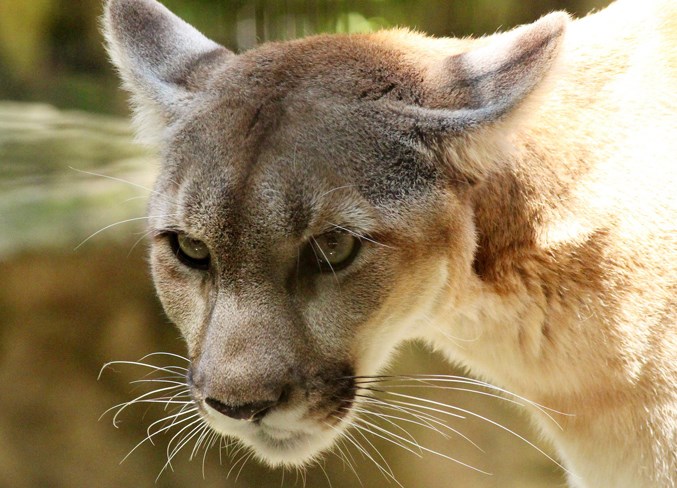 While cougar sightings are rare in populated urban areas, Alberta Environment and Parks advises residents of Rocky View County should still be proactive and prepared for such an event.

A cougar was spotted near the Cochrane RancheHouse Aug. 20, prompting the Town of Cochrane to report the sighting to Alberta Fish and Wildlife. Though encountering cougars in an urban area is fairly rare, Paul Frame, a carnivore specialist for Alberta Environment and Parks, said it can occur when the big cats leave their birth homes in search of new territory. “We know from radio collar studies that when cougars are dispersing from their natal home ranges – a junior cougar is heading out and trying to find territory of its own – they’ll often follow riverways and other drainages as travel corridors,” he said. Another reason a cougar can be found within a town’s limits is that it is searching for prey – putting small pets in backyards at risk. If you spot a cougar in town, Frame recommends reporting the sighting to the authorities, whether it’s the Report a Poacher hotline (1-800-642-3800), the nearest Alberta Fish and Wildlife office or even the RCMP. “It can pose a public safety risk, but generally, when a cougar finds itself in that kind of setting, they’re uncomfortable and don’t want to be there,” he said. “They’re potentially dangerous animals, so caution should be taken when they’re in the area, for sure.” Nick de Ruyter, program director for the WildSmart Community Program, said running away from a cougar is not a good idea, as it can trigger the animal’s chase instinct. “Generally, they don’t want to be anywhere near us or want anything to do with us,” he said. “One thing that people really need to be aware of is that there are animals like bears and cougars in the region. Cochrane, even though it’s close to Calgary, is in bear and cougar country.” He said if a cougar is stalking you or appears like it could come after you, the best bet is to be loud and make yourself seem as big as possible by holding your jacket above your head. “The main thing with cougars, whether they’re making contact with you or if they’re close, is that you never want to be seen as an easy prey,” he said. “We never run away – we want to stand our ground. “If they’re a little bit further away, we can back away slowly, but if they keep coming at us, we may have to stand our ground there and we want to be as big, as loud and act as aggressive [as possible] to try and scare that cougar away.” Walking around alone at dawn or dusk can also increase your chance of encountering a cougar, according to de Ruyter, as those are the times they usually search for food. “People need to just be aware of that – that there’s the possibility of encounters with those animals,” he said, adding that bear spray is also effective on cougars.