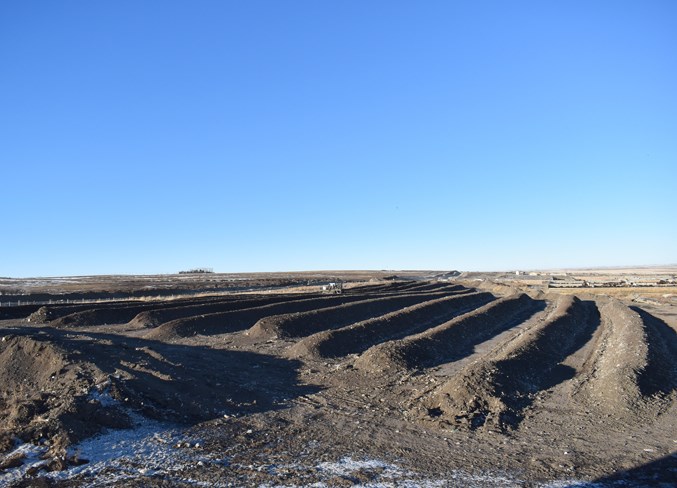 During a four-hour public hearing Dec. 11, Rocky View County (RVC) council attempted to find a compromise that would allow a compost facility – Thorlakson Nature’s Call Inc. (TNC) – to continue its operation, while addressing odour concerns from nearby residents.

According to planner Lindsey Ganczar, a redesignation application was submitted by TNC to allow the existing compost facility to maintain its operation east of Airdrie. The facility is currently operating without appropriate land use or a development permit, she said.

Lindsey Cybulskie, TNC’s strategic manager, attributed the lack of development permit and proper land use to oversight. According to Cybulskie, the compost pad has been operating since 1987, directly adjacent to Thorlakson Feedyards and a packaging plant for Scotts Canada.

Following approval by Alberta Environment and Parks (AEP) in 2010, TNC is legally allowed to accept 20,000 metric tonnes of organic waste a year, Cybulskie said. The facility currently accepts material collected through green-cart programs in both Airdrie and Langdon. According to Cybulskie, TNC intends to pursue an expansion with AEP to double its annual collection, while adhering to AEP’s regulations.

“We are trying to align our 30-year composting facility with the current RVC land use bylaws,” Cybulskie said.

The application drew significant opposition, with many nearby landowners identifying what resident Dennis Gieck described as a “disgusting stench” emanating from the existing Thorlakson operation – although it was unclear if the source was specifically TNC, or one of the other two businesses located on site.

“I can’t even describe the stench,” said another resident, Audrey Sluggett. “It is horrible, and hangs heavy over the air. The stink even gets into the house…. It is ruining our lives.”

Gieck told council he spearheaded a petition, signed by 210 RVC residents and an additional 55 from Airdrie, citing odour as a primary concern. Many of those who signed are from rural areas, Gieck added, and are familiar with the smell of a feedlot.

“The facility operator tells us nothing has changed over 30 years – it’s a lie,” he said. “In the past two years, the smell has changed. It’s no longer manure smell. It’s now a sickening, sweet stench that you can’t stand, but you have to accept it because you can’t move.”

Cybulskie said the odour complaints have all been relatively recent, received after RVC notified residents of the proposed redesignation. Since the compost facility has not modified its operations since 2010, she said, the nuisance odours are likely generated by the feedlot.

She added TNC has attempted to mitigate odour by purchasing a large mixer to speed up the composting process, and hired Dillon Consulting to conduct odour tests on site as part of the redesignation application.

According to Jared Kassel with Dillon Consulting, measurements were taken on three arbitrary days – Aug. 20, Sep. 4 and Oct. 15 – using an industry-standard Draeger tube system. The tests did not detect odours, he said.

“It’s important to remember here that the Draeger test was measuring odours related specifically to the compost facility itself, not the feedlot,” Kassel said. “Those are two separate operations.”

While Area Coun. Daniel Henn agreed there is a need for a compost facility within RVC, he said it is imperative TNC act as a good neighbour to residents.

The amendments were all passed unanimously.

“Composting is important in today’s world,” said Reeve Greg Boehlke. “I think this is a good effort to move this operation, which, business wise, if it’s complying, we’re happy to have. A business cannot affect the life of another neighbour in a negative way.”

“I know you think I’m holding this up…but at the same time, I just don’t know how you’re going to control smells with a [development permit],” Kissel said.

After requests from her colleagues to reconsider, Kissel withdrew her opposition, and third reading was granted unanimously.