If you took your dog out to John Peake Park this summer, you may have seen the goats chomping on the greenery along the water’s edge.
Aug 28, 2018 12:01 AM By: Airdrie City View 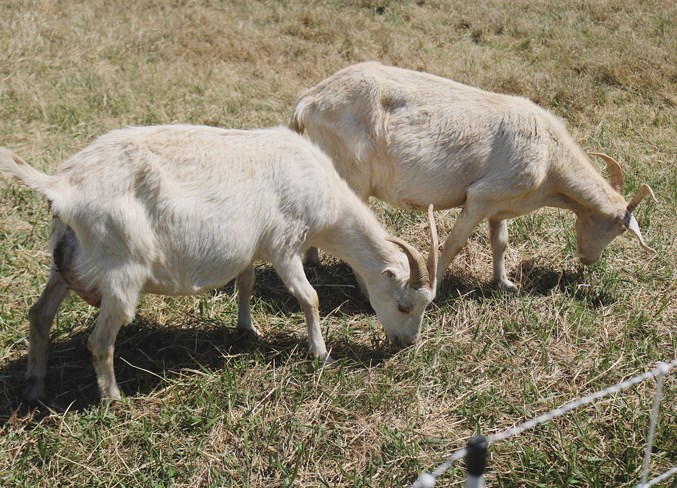 If you took your dog out to John Peake Park this summer, you may have seen the goats chomping on the greenery along the water’s edge. The City of Chestermere was employing the furry fellows as an environmentally-friendly way to fight weeds in the area throughout the summer. According to Katelyn Richards, community recreation co-ordinator with the City, the goat project – known as target browsing – has been a success. “They’ve done a great job, and we’ve seen a definite improvement in our weed situation,” she said. “There’s a lot less, and they’re not coming back as thick. So, I believe we plan on having them come back next year. It’s a great way to handle weeds in an area that’s sensitive, by the lake.” The goats first arrived May 14, and came back in July. According to Richards, they will make one more trip to the off-leash area in John Peake Park, from Aug. 25 to 31. In Alberta, Richards said, spraying pesticides near water bodies is not permitted. And it’s friendlier for dogs enjoying the park if there’s no trace of pesticides at all, she added. The goat project was also well-received by both dogs and residents throughout their trips to the park. According to Richards, the City noticed a positive public reception through social media, and Jeannette Hall of Baah’d Plant Management and Reclamation – the team responsible for the project – said she also heard great things from the community while the goats were around. John Peake Park’s northern section is an intimate space, Hall said, which made it easy to communicate with park-goers. She added it was important to remind people that the shepherd and goats need space to work. The opportunities to communicate with Chestermere residents, however, allowed Hall and her team to educate people on how goats deal with weeds, and just how clean and safe it is, she said. “There was a lot that people didn’t totally understand regarding even goat poop, and just how clean it actually is,” she said. “There’s very little bacteria, so there’s almost no flies with the whole operation.” She pointed to how a goat’s thorough digestive system helps break down seeds to prevent their redistribution through manure, which occurs with other livestock. The goat’s special stomach is also what keeps them from being harmed by toxic weeds, Hall added. A section of the pathway in the park has been disturbed by sandbar willow plants, according to Hall, which has caused tripping hazards. She said goats put pressure on the offshoots growing out of the pathway, which tells the plant it’s being attacked and should force the roots deeper. “So, it makes those plants more drought-resistant, but it also puts those roots deeper down and they, hopefully, will start to leave the pathway alone,” she said. This multi-use capability may be part of what is causing a rise in popularity for goat herds in plant management, though Hall warns the industry still isn’t standardized. She said she’s started seeing others contract misleading operations with just a couple of goats, which can’t provide the same results as the specialized training of about 1,000 Baah’d goats. She said she hopes to see regulation developed as the popularity of this environmentally-friendly weed management industry grows. Which means Chestermere might want to start planning their target browsing project for next year – according to Hall, the company is already booking into 2019. The goats, she said, are in demand.