With community halls struggling to stay open in many small towns throughout Alberta, residents in the Balzac area have come together in an effort to keep their facility in operation.
Jul 24, 2018 12:01 AM By: Jessi Gowan 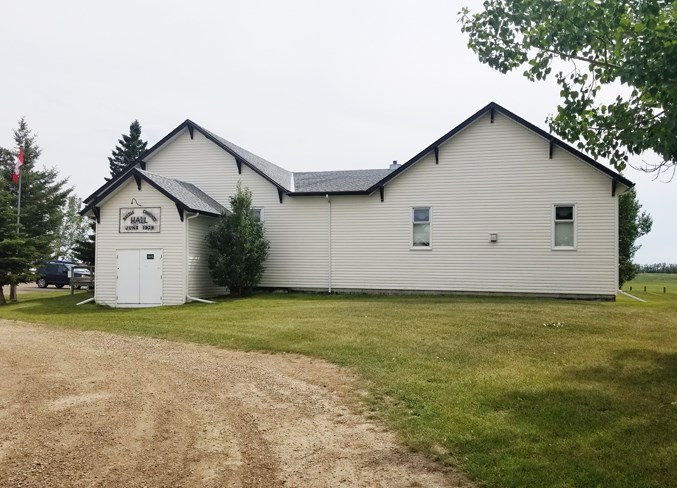 The future of Balzac Community Hall looks brighter, thanks to the support of area residents.

With community halls struggling to stay open in many small towns throughout Alberta, residents in the Balzac area have come together in an effort to keep their facility in operation. “A couple of months ago, we were down to not very many members – we had lost some, and a few had moved away,” said Teal Hallaby, booking agent at the Balzac Community Hall. “We needed more directors on our board if we wanted to be able to continue.” According to Hallaby, the board reached out to the community, requesting additional volunteers. The effort didn’t go unnoticed, Hallaby said, and a significantly higher turnout attended the May board meeting. “After that meeting, we had definitely gotten some new members,” she said. “Then, they had their next meeting in June, and again had a good number of people come out and provide input as to what they wanted to see done with the hall. “Essentially, it looks like the community does want to see this facility continue to be run as a community hall.” Hallaby, who grew up in the Balzac area, said the facility has been an important part of the community for as long as she can remember. And, she said, while Balzac continues to shrink, more and more people are moving out to new neighbourhoods in the surrounding areas. “Balzac is kind of getting almost to the point where it’s non-existent,” Hallaby said. “There’s not very much left here that really is Balzac. That’s why it’s so nice for us to have something that belongs to the community – a place where people can get together.” The facility sees a significant amount of use, according to Hallaby. The space is rented out for a wide variety of events – weddings, birthday parties and bridal or baby showers. During the week, Hallaby said, several community groups and organizations use the hall to conduct meetings, and regular dog obedience sessions are hosted in the basement. “There’s all sorts of things going on here, and the new people on the board have indicated an interest in trying to develop a few more community events, as well,” she said. “We’ve got a president, a new board of directors, and things are getting more organized and pushing forward.” While Hallaby said she isn’t sure exactly what spurred the renewed interest in the future of the facility, she added she is pleased to see more people supporting the social hub of the Balzac community. “I don’t know if it was just the reach-out to the community or the fact that there is the possibility that this facility could no longer be there,” she said. “It’s not just community halls, though – everywhere, it seems like it’s getting more and more difficult to find volunteers. I don’t think it’s so much a lack of caring, but everyone’s lives are just so busy. That’s why it’s important to have a space like this, where people can get together.” For more information about the Balzac Community Hall, or to get involved with the board, send an email to balzachall@gmail.com or leave a message at 403-226-0090.