Eight candidates shared their platforms on future growth, development, debt and planning at an all-candidates forum for Rocky View County divisions 1, 2 and 3, Sept. 27, at the Springbank Community High School.
0
Oct 5, 2010 12:00 AM By: Airdrie Today Staff 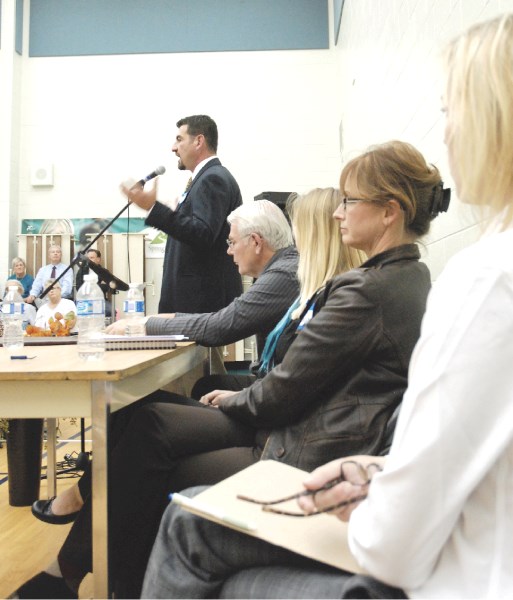 Eight candidates shared their platforms on future growth, development, debt and planning at an all-candidates forum for Rocky View County divisions 1, 2 and 3, Sept. 27, at the Springbank Community High School.

Division 2 candidates include Springbank activist Kim Magnuson and former educator Herb Coburn, who ran as a candidate for the Liberal Party in the provincial elections of 2004 and 2008. The division is currently represented by retiring Mitch Yurchak.

Division 3, which is currently represented by Gordon Branson, who is stepping down, has four candidates including businessman Jay Sarhan, community activist Breanna Sikorski, Springbank Police Advisory Board founder Christine Pennell and lawyer and consultant Margaret Bahcheli.

Resident Jim Willson moderated the event, which drew about 80 people.

Division 1 candidate Everett said the County needs to work together as a team to stop the fracturing of the agricultural land and build community pride.

“If we don’t, we’ll slowly lose our land to annexations,” said Everett. “We have neighbours that would like to grow but not see us grow. We are also attacking ourselves, with people trying to separate into pieces.”

Butler countered his opponent with the opinion that strong regional partnerships would make the county stronger.

“If we came to it (the CRP) strong, we would be in a much better situation than we are now,” said Butler.

Division 2 candidate Magnuson said she would support a moratorium on development until the Growth Management Strategy is revisited and said taxpayers shouldn’t have to pay the cost of growth infrastructure.

“All growth should pay for itself,” said Magnuson. “I would like to see Rocky View renegotiate with the CRP to get water and servicing.”

“(When) I take a look at the nodes and cores and it is difficult for me to think about,” said Colburn. “We need to respect the past patterns.”

She shared many concerns about the future of Rocky View. If elected, she promised to seek innovative solutions to urban sprawl.

“There are places in Europe and elsewhere around the world that have exquisitely preserved the countryside through municipal planning,” said Sikorski.

“It is about bringing in the policies that would preserve the land. I do advocate regional planning instead of competing with the city (of Calgary).”

Pennell said she stands for sensible growth and development in the county and better communication with the residents.

“The GMS is contradictory, ambiguous and doesn’t follow much of what the background studies (recommended),” said Pennell.

If elected, Pennell said she would champion equitable, transparent funding to recreational boards across the county.

“I am loyal and trustworthy in my approach,” said Sarhan. “That’s what sets me apart from the norm.”

Bahcheli said, if elected, she would set up a finance committee to help gain transparency.

She said she has detected a common thread when discussing issues with residents across the county.

“Everyone loved the rural nature of the county,” said Bahcheli. “To me, it is black and white. What I want to do here in Springbank, is take the area forward so in 10 to 15 years it is internationally recognized.”