Tornado touches down near Crossfield 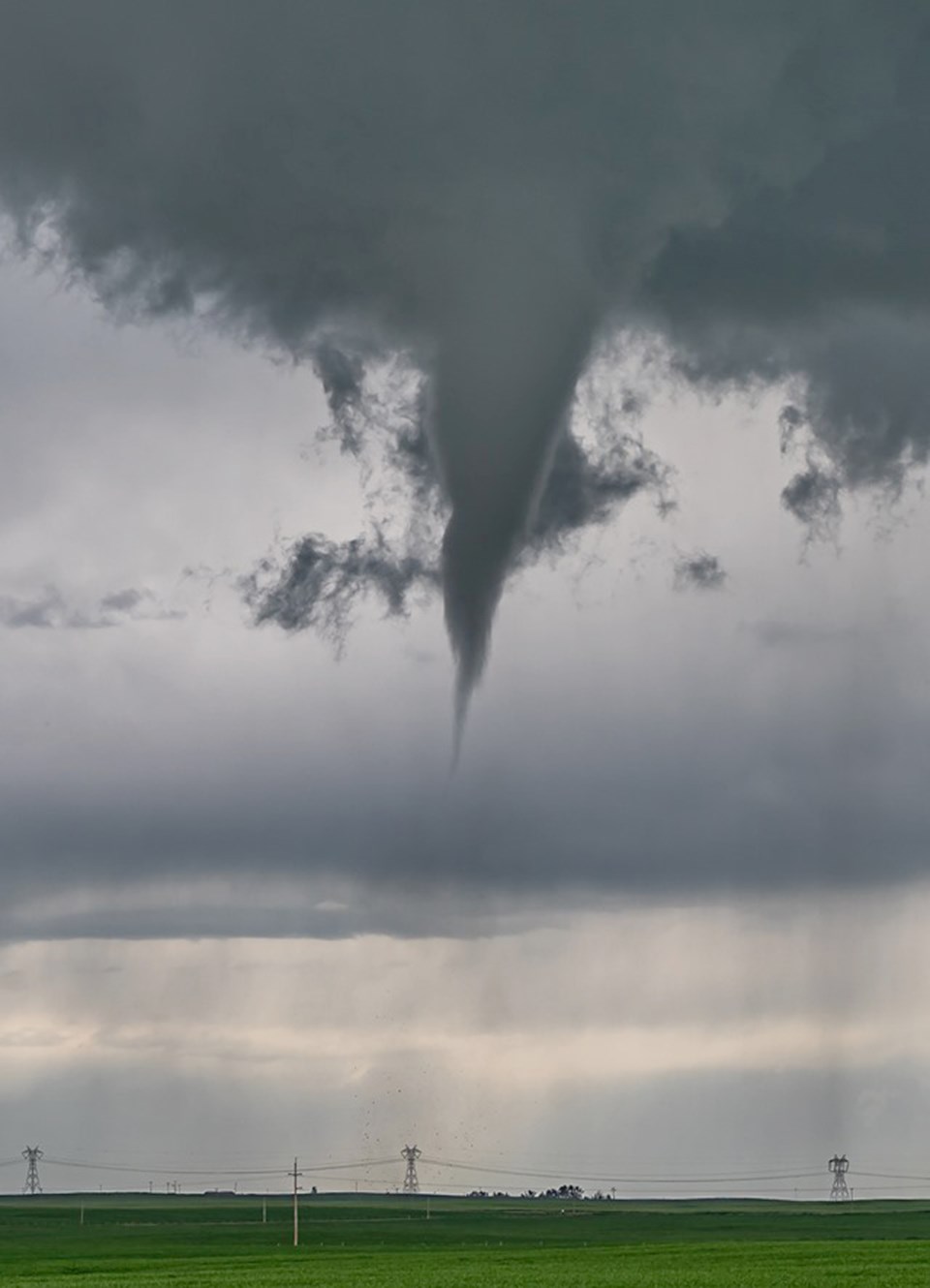 Storm chaser Matt Melnyk snapped this photo of a tornado as it touched down outside Crossfield July 14. Photo Submitted/For Rocky View Publishing

Residents of Airdrie, Crossfield and Rocky View County (RVC) were advised to take cover in the early afternoon July 14, as a severe thunderstorm in the area produced a tornado.

According to Robyn Dyck, a meteorologist with Environment and Climate Change Canada (ECCC), the severe thunderstorm warning was upgraded to a critical tornado warning shortly after 2:10 p.m.

“This thunderstorm is located near Crossfield and is moving slowly to the east,” the alert read. “This is a dangerous and potentially life-threatening situation.”

A tornado was confirmed to have touched down at 2:15 p.m, roughly two kilometres (km) northeast of Crossfield, Dyck said. She added radar showed the storm containing the tornado appeared to have moved due east.

Calgarian Matt Melnyk, a member of storm-chasing team Twisted Chasers, said he happened to be in the right place at the right time to snap a photo of the tornado as it touched down.

“I saw a lot of rotation in the clouds,” he said. “They were very dark and, the day before, there was actually very large hail inside the storms, which definitely makes them severe.”

Melnyk estimated the tornado travelled for approximately two to three minutes before dissipating, and described a debris cloud at its base.

Dyck was not able to confirm the duration of the tornado, but indicated it was a weaker twister. According to an ECCC weather summary, damage from the storm was limited to a holiday trailer that was flipped and damaged. ECCC estimated the tornado’s wind speed was 90 to 130 kilometres per hour, and received the lowest ranking on the Enhanced Fujita (EF) Scale – EF0. The EF Scale assesses tornadoes based on the damage they cause, Dyck said.

“That’s what we use to rank any tornado,” Dyck said. “It goes from zero to five.”

For context, Dyck said, only one tornado in Canada has ever received the highest ranking on the scale – a 2007 tornado in Elie, Man. An EF0 tornado is quite common, she added.

“The only way we can really tell the wind speed of the tornado is by the damage it produces,” she said. “This one, it went through a field and the only thing it hit was a trailer. Unfortunately, if a tornado doesn’t hit anything, we won’t really know what the wind speed is, because we have no way to measure it unless you’re actually in the tornado with an anemometer, which no one wants to be there because it’s dangerous.”

A second warning was issued for RVC near Beiseker, Irricana and Kathryn shortly after 3 p.m., indicating the thunderstorm had moved into that area and still had the potential to form tornadoes.

Dyck noted the severe thunderstorms were caused by a weak low-pressure system in southern Alberta, accompanied by a cold front moving southward from northern Alberta, which created a strong temperature gradient across the province.

“That can trigger thunderstorm development and increase their severity,” she said.

These conditions, Dyck said, along with high moisture and lower cloud bases, created an ideal situation to produce tornadoes.

ECCC will continue to investigate the storm, Dyck said. Due to the tornado's low severity, the investigation will most likely include calls to observers and a digital investigation of videos and photos posted online showing the storm’s results.

“We try to put together a story of when the tornado would have formed, why, and what damage was caused,” she said.

Dyck also emphasized the importance of always taking critical weather alerts like tornado warnings seriously. She added when alerts are issued, there is often limited time for the public to respond, therefore everyone should plan ahead and know what to do in case a tornado is imminent.

“In the case of a tornado warning, that would be…going to your basement, or even just being on the interior of your house and away from windows in case there’s debris,” she said.

Residents should also monitor their phones and the surrounding environment to determine when the storm has passed and it's safe to come out, she added.