Teaching the dangers of impaired driving

With the legalization of cannabis in Canada mere months away, a program offered in schools by Mothers Against Drug Drivers (MADD) Canada is even more important to impressing on students the dangers of impaired driving, according to MADD Calgary Presi
0
Feb 8, 2018 12:00 AM By: Airdrie City View 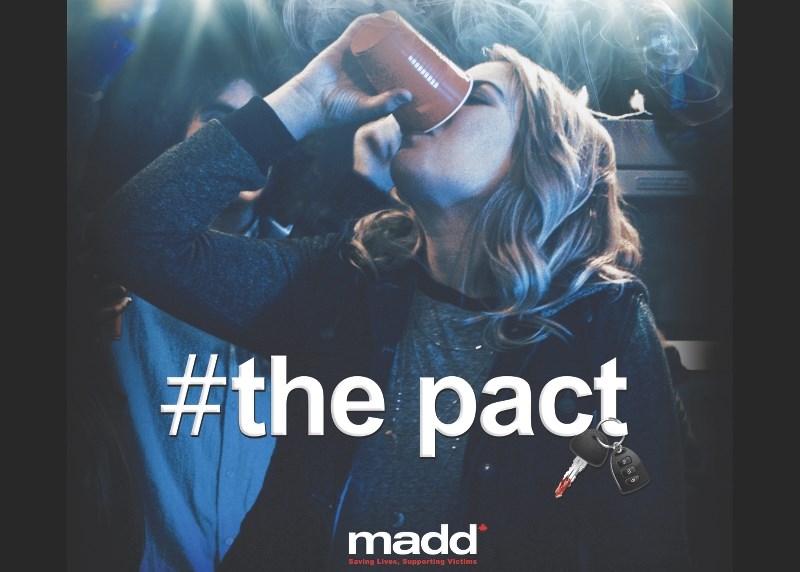 The Pact is a program of MADD Canada which provides high school students with information about the dangers of impaired driving.

With the legalization of cannabis in Canada mere months away, a program offered in schools by Mothers Against Drug Drivers (MADD) Canada is even more important to impressing on students the dangers of impaired driving, according to MADD Calgary President Karen Harrison.

“We’ve known for a long time that marijuana has always been an issue with impairment and driving. Studies have shown that about 56 per cent of people who have died in an impaired driving crash have had drugs and/or alcohol (as a factor),” she said.

“With the legalization, it’s more in your face. We’re trying to prevent those numbers from going up. We do teach the kids that it’s not just alcohol we’re talking about.”

According to Harrison, studies show that kids between the ages of 15 to 25 are at the highest risk for injury due to impaired driving. The school assembly program MADD offers is for students in grades 7 through 12.

The Pact focuses on four friends, one of whom dies in a collision caused by an impaired driver, who want to come up with a way to help other students from becoming a statistic.

They come up with the Pact, which matches students with a buddy they can call for help if they have had too much to drink or are under the influence of drugs or find themselves in an uncomfortable situation.

“It shows them how the loss effects everybody around that person, how easy it is to fall into the traps of impaired driving or getting into a vehicle with an impaired driver, and it also shows how they can turn this high risk situation into a positive thing with their own peer group,” Harrison said.

“This is probably one of my favourites because it does teach so many different lessons.”

MADD Canada has run the school assembly program since 1994. Each year, the organization evaluates the success of the program and evidence shows it is working. A 2015-2016 survey of students showed 80 per cent of respondents said the program effectively delivered the message.

Two-thirds said the program will be effective in changing their behaviour, and 97 per cent supported a similar program coming to their school the following year.

The program includes a discussion aid teachers can use with the students after the assembly.

“Because (students are) such high risk – especially around graduation – it just gives them an idea that there’s something they can do and they’re not alone,” Harrison said. “I’ve raised three boys myself and my discussion with them was, if you’re ever impaired, just call me – no questions asked.”

The Liberal federal government announced plans to legalize the recreational use of cannabis in Canada by July 2018, and the Province of Alberta released its draft cannabis framework Oct. 4, 2017. MADD Canada is one of many stakeholders asked by the provincial government to contribute feedback.