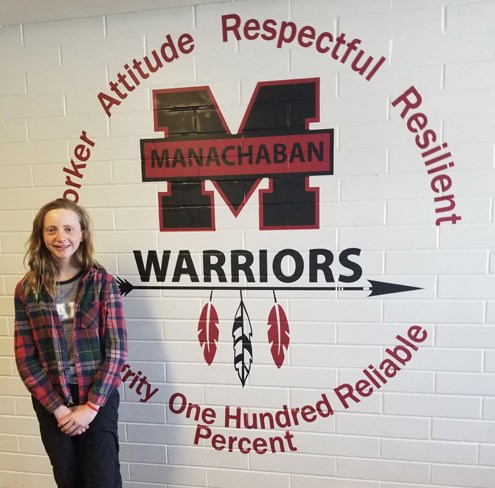 Gabrielle Courte’s insight and maturity belie her age. The 13-year-old Manachaban Middle School student recently won first prize in the Grade 5 to 8 category of the A&E Canadian Classroom Lives That Make a Difference Essay Contest, which challenges students to write about an individual who has had significant influence on Canadian society.

Courte chose Instagram phenom Rupi Kaur, an Indian-born Canadian poet who uses her work to tackle themes such as abuse, femininity, love, self-care and heartbreak. Kaur’s prominence is anchored by two bestselling books, and her work is available to her more than 3.6-million Instagram followers.

“[Courte] used her eloquent prose to capture the impact Rupi Kaur has had on victims of sexual assault, as well as the experience of immigrants in Canada and around the world,” said Sara Hinzman, vice-president of distribution with A+E Networks. “Her essay described the power of the written word, and how it resonates with young Canadians today.”

Courte said she was drawn to Kaur after reading one of her books, and said she believes the themes of Kaur’s work has had a significant impact on society.

“The way she talks about feminism and sexual assault and immigration are really important right now, especially with the #MeToo movement, and lots of political decisions being made surrounding immigration,” she said.

To approach her subject matter, Courte said she conducted research on Kaur and the influence the poet has had. She then focused her essay, which was limited to 300 words, on statistics that demonstrate why Kaur’s subject matter is so relevant, and how the advocate has had such far-reaching appeal.

“She makes poetry available to people who wouldn’t necessarily go out and buy a book of poetry,” Courte said, adding Kaur’s accessibility is vital.

“It opens new doors for people who maybe wouldn’t have been able to connect with these things, otherwise, who wouldn’t have felt it would have been something they were interested in and they can relate to the things she is saying.”

Serious topics surrounding sexual assault, harassment and consent have become mainstream topics among young people today, which is Courte said is creating an awareness that was less common in previous generations.

“People are being more open and talking about these issues more, whereas it was more taboo to talk about some of these things [in the past]. Talking to my grandma, we have very different opinions, sometimes, about sexual assault. She remembers things from when she was young that would have just been kept quiet,” Courte said. “Nowadays, people are really coming out and talking about it, to start a conversation to say it’s not OK.”

Along with the distinction of first prize, Courte’s essay earned her $2,000. Half of the money will be invested in university, where she said she will pursue an education and career in a writing-related field, possibly journalism. The rest will be divided between a French immersion class trip to Montreal and Quebec City, and yet-to-be-determined endeavours.

Another $1,000 was gifted to the school, which has not announced how it will be spending the money.

About the Author: Chris Puglia

Chris is a SAIT-trained journalist with more than 20 years of experience.
Read more