As Canada Geese begin their springtime return to Airdrie, the Alberta Institute for Wildlife Conservation (AIWC) hopes residents will take steps to keep them from nesting in dangerous locations.
0
Mar 21, 2019 12:01 AM By: Ben Sherick 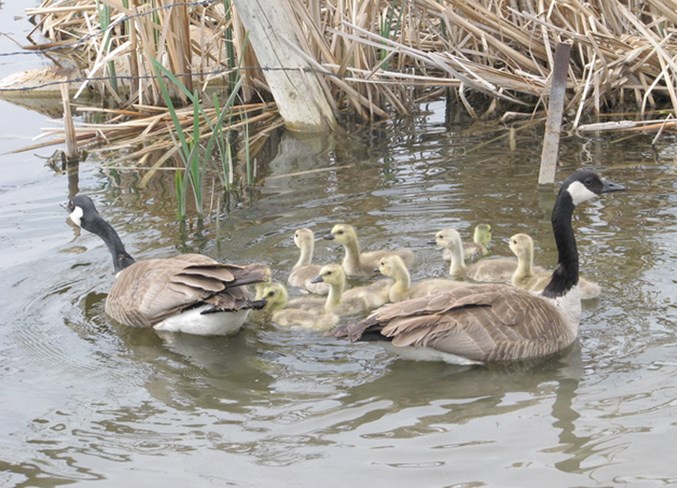 As Canada Geese return to Alberta, steps should be taken to discourage them from nesting in dangerous locations.

As Canada Geese begin their springtime return to Airdrie, the Alberta Institute for Wildlife Conservation (AIWC) hopes residents will take steps to keep them from nesting in dangerous locations. “People have probably noticed already that the migration is starting, so it’s really important that we start taking these preventative measures quite quickly, and make sure that you keep them in place until at least the end of April,” said Katrina Jansen, AIWC education and community engagement co-ordinator. According to Jansen, AIWC has received calls in past years of geese nesting in unsuitable areas, such as balconies or decks. These nesting locations can be especially dangerous for young geese as they try to travel to nearby water, she said – while goslings can safely jump from a height of about three storeys, any higher poses a risk to the young who can’t fly. Goslings born at greater heights need to be relocated by volunteers, Jansen added, but moving geese and goslings that have taken up residence on higher buildings also poses risks to wildlife workers – running around on a high-rise with distressed goose parents trying to protect their babies presents obvious hazards. Additionally, she said, in some cases, AIWC volunteers found the parents became so distressed they abandoned the goslings, leaving orphans that needed to be cared for at AIWC’s facility near Madden. “All in all, it’s so much better if we can just prevent this situation from happening,” Jansen said. With that in mind, AIWC is trying to raise awareness early in the year on the steps people can take to redirect geese to ideal nesting areas, she added. “What we’re really trying to emphasize now is…getting people to start blocking off areas where geese are likely to nest before they actually come in and start creating all of these issues,” she said. Geese can be discouraged from nesting in an unsuitable location through a number of methods, Jansen said, but the most effective is netting off problem areas. Nets should be thick enough that geese and other birds recognize the obstruction and don’t get tangled up, she added. “If you’re on a balcony and you’ve had geese there before, often times geese are actually going to come back to the same location year after year, even if they weren’t successful the first time,” she said. Putting up a visual barrier, such as large trees or planters, is also effective. “Geese really like to have a wide, flat area where they can see predators coming from a ways away,” Jansen said. “They also like to be up a little bit higher.” Netting can be taken down around the end of April – by that time, she said, the geese will have nested elsewhere. If a goose nests on your property, Jansen noted, there is no option but to wait for the birds to move on their own – once geese nest, it’s illegal to move the eggs. “As a migratory bird, geese are actually protected under federal legislation,” she said. “Canada is a signatory on the Migratory Birds Treaty of North America, and that means when they migrate out here and they’ve laid their eggs, along with all other migratory birds, it is actually against federal law to disturb those nesting birds.” The public should not try to relocate a goose by themselves, Jansen added. Trying to grab a goose can be a dangerous task, and interfering with goslings can result in the aggressive birds charging and biting. “Geese are not the most human-tolerant of animals,” Jansen said. “Geese are extremely powerful, in fact – their wings are meant for long-distance migrating, and they are so strong, we’ve actually found instances where they can break human bones.” As geese return, it’s also possible residents might encounter an injured bird. In that case, Jansen said, the best thing to do is call AIWC’s wildlife hotline at 403-946-2361 She added AIWC will hold an on-site talk about geese March 24. Anyone interested in learning more about the birds can register for the talk at aiwc.ca