'Opposite of busy:' Business down at pawnshops, payday lenders during pandemic 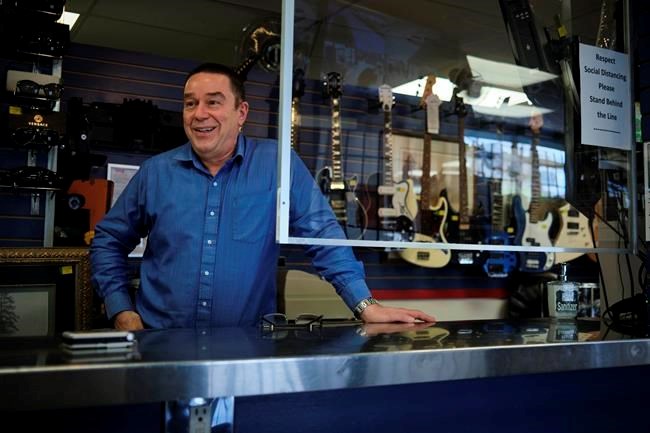 Caption: John Sanford, co-owner of Rocky Mountain Pawn, speaks about the business in Calgary, Alta., Wednesday, May 27, 2020, amid a worldwide COVID-19 pandemic. THE CANADIAN PRESS/Jeff McIntosh

CALGARY — John Sanford has been a pawnbroker for 20 years and says he's never seen anything like it.

Pawnshops and payday loan lenders have long been harbingers of hard economic times due to health and financial crises.

But Sanford says that hasn't been the case in the topsy-turvy world of 2020 where the COVID-19 pandemic has led to a recession.

"I rushed to the bank before this happened and I got all kinds of cash ready. I thought it was going to be a bonanza. But nope. Absolutely not," Sanford, co-owner of Rocky Mountain Pawn in Calgary, says as he surveys the dwindling number of items on his shelves.

"It was amazing how much stuff we got after 2015 when the oil went in the tank. We had lots of stuff. And now we have nothing."

Pawnshops lend people money and typically give them 30 days to come back, repay the loan and retrieve their items. Sanford says about eight out of every 10 customers usually come back.

Sanford on average sees 15 to 30 pawns daily, but on a day last week, he'd only had one by mid-afternoon.

"From the people we've talked to and who have come in, the economy's awash with free money. There's some people bragging how much they're getting on CERB," he says.

The Canada Emergency Response Benefit from the federal government provides people out of work due to the pandemic $500 a week for up to 16 weeks.

On the bright side, Sanford days, items that have been sitting in storage for years have been sold. Gold rings, chains, Rolex watches, TVs, video game consoles and stereos flew off the shelves early in the health crisis. Guitars have also been popular.

But with supplies disappearing and nobody pawning items, Sanford predicts a reckoning is coming soon.

"As far as pawns go, this is going to be the worst month since 1982 for lending out money. Thirty days from now we won't even make enough money to pay our rent."

The co-owner of Halifax Buy and Sell says business has also been slow.

"It's really strange," says Robert Blotnicky. "Literally everybody coming through the store is looking to spend money from their CERB cheques and trying to buy things to secure their needs."

People also rushed in to pay to get their pawned items back, he says. "At this point, our pawn shelves are very bare."

The payday loan industry is also struggling, says Alan Evetts, a director of the Canadian Consumer Finance Association and an owner of MyCanadaPayday.com in Vancouver.

In the first six weeks of the pandemic, numbers across the industry were consistently down about 84 per cent from before the crisis, he says.

"Things changed radically. The demand has been completely decimated by COVID," he says.

"I think there are a few factors driving it. Spending is down to a huge degree while people are at home. And life is cheaper when you don't leave your house."

Evetts also blames high unemployment for the dropoff, since loans are dependent on customers having an upcoming payday to repay them.

This report by The Canadian Press was first published June 2, 2020