UPDATE: Main Street construction to be completed in September 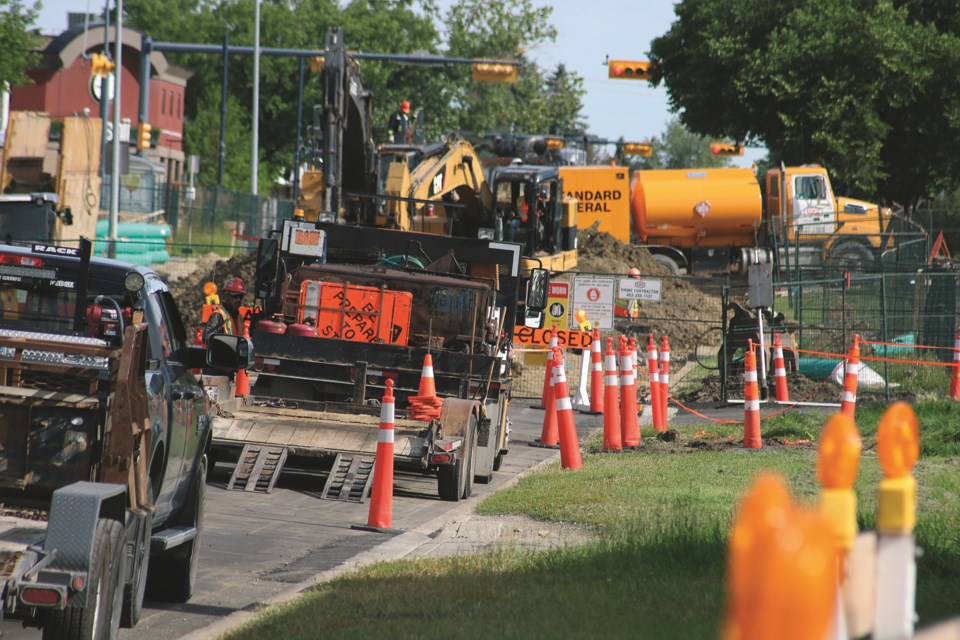 Construction on Main Street is currently on Phase 13, north of Airdrie Main Street Square. August 25 is the predicted completion date of the project. Photo by Kate F. Mackenzie/Airdrie City View

UPDATE: This story was updated July 23 to reflect a new project completion deadline of Sept. 6. The City's original deadline was Aug. 25.

Construction along Main Street is scheduled to be completed by Sept. 6 due to recent rainy weather and other challenges.

The roadwork will replace water and sewer infrastructure dating back to the 1970s, according to Glenn Archer, team lead for Capital Projects with the City of Airdrie. The new infrastructure will have an expected lifespan of around 100 years.

Archer added this summer's construction is a continuation of a 2019 project that went unfinished due to heavy rainfall.

"Last year, we tried to just work through the weather and it wasn't very effective," he said.

The project is currently in Phase 13, Archer said, with work taking place just north of Airdrie Mainstreet Square, between Centre Avenue and 1st Avenue. The intersection will remain closed until Aug. 5, Archer said, when the current and subsequent phases are scheduled to be complete.

Archer explained that if it's raining and there's an open excavation, which is three to four meters deep, rainwater will run into it and the workers then have to pump the water out, which creates "a lot of mud, which you can't build a road on."

"It's better to clean it up, let it dry out, and then start again," he said.

Recent rainfall has once again impacted the project, Archer said.

"The last phase [the crews] did was in front of the old fire hall by [Shoppers Drug Mart]," Archer said. "They were actually ahead of schedule, but with the crazy weather...they've lost what they've gained."

The adverse conditions meant workers have had to catch up on the delayed progress during evenings and weekends, when weather has been better, Archer said.

The weather hasn't been the only challenge, Archer said, as working in some of the older areas of the city has presented unexpected roadblocks as well.

Last year, an unmarked gas main was struck and broken during construction, he said.

"We're finding things that aren't on any drawing," he said. "Somewhere along the line, somebody added something in and when we dig, we find it."

An upcoming issue, Archer said, is dealing with a property line in front of buildings along the north end of Main Street in the next phase of the project.

"Typically, the public side is about a metre off the sidewalk," he said. "But not the last block, the property line is actually in front of the building. We're trying to figure out how we're going to deal with the entire sidewalk, which has trees and bricks and is very decorative."