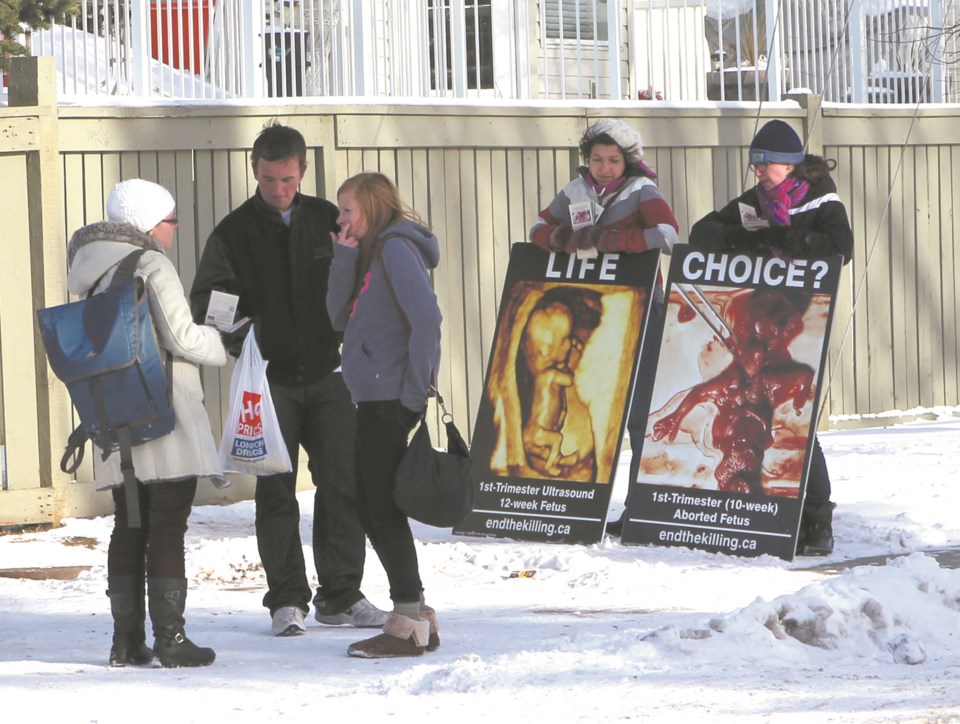 Council is hoping to hear from residents regarding its options for the management of graphic images – like these displayed in front of George McDougall High School in 2013 – distributed on flyers and included on posters in public spaces. File Photo/Rocky View Publishing

Airdrie City council is investigating its options to manage the distribution of graphic flyers and the display of graphic posters in public spaces, and is inviting residents to speak to the issue at a public input session before council makes a decision on how to move forward.

“Where I’ve struggled with this from the very beginning is that if somebody were to distribute a pornographic image – like a blatant, awful pornographic image – and put it on everybody’s doorstep, the RCMP would get involved,” said Deputy Mayor Candice Kolson during a regular meeting of City council Nov. 18. “But this, the abortion flyers are OK? To me, this is just insanity.”

Kolson introduced the idea in a notice of motion in August, in response to graphic flyers which were being distributed in the community at that time. Council requested administration report back on the municipality’s options, and according to City Clerk Sharon Pollyck, staff reached out to a number of communities to find out how they address the issue.

“The distribution of graphic flyers has happened in municipalities across Canada; and, to the best of staff’s knowledge, no community has either tried to regulate or successfully regulated these activities,” she said. “Doing so would likely open the City up to legal challenges under allegations that individuals’ rights to free speech are being infringed upon.”

Calgary offers a more general provision within its Community Standards Bylaw that Pollyck said “allow[s] residents to make their own decisions regarding the distribution of any material they receive door-to-door.”

Staff suggested Airdrie follow Calgary’s lead by implementing a policy where, if a sign is posted in a “conspicuous place” on the property indicating flyers are not wanted, it would be in violation of the bylaw for an individual or business to leave one. Exempted from the bylaw, Pollyck noted, are flyers distributed for elections advertising, community newsletters, information provided by government and elected officials, and flyers contained within newspapers.

If a distributor was found to be in contravention of this bylaw, she added, the fine would start at $50 per household, per complaint received.

However, Kolson said there would be no way of knowing if all flyers desired by a resident would fit indefinitely into these exemption categories – putting up a ‘no flyers’ sign could result in citizens not receiving the communications they may want to receive. Additionally, Mayor Peter Brown noted a number of households have already posted similar requests, and still find flyers in their mailboxes.

Brown also pointed out that the types of graphic images used on the flyers in question “could almost apply” to the definition of obscenity, as included in the Criminal Code, and added he was uncertain whether the proposed bylaw would effectively prevent these kinds of images from being distributed to residents.

“I think we have to start somewhere,” said Coun. Darrell Belyk. “A bylaw would be something that we have in our coffers just to fall back on, if something does escalate beyond what has happened in the recent past.”

Despite some councillors’ ongoing concerns with the wording of the document, first reading was carried unanimously on the bylaw, allowing administration to schedule a public input session for council to gather community feedback before proceeding – particularly, Kolson said, from those who complained about the flyers in August.

Two councillors were absent for the vote – Coun. Al Jones recused himself from the discussion, citing a potential conflict of interest, and Coun. Tina Petrow was not present for the meeting.

“I struggle with this, and I struggle with the laws surrounding it, and I appreciate that our staff are trying to do something about it. But, to me, we just haven’t hit the right answer, here.”