A mother’s desire to make school fun and interesting for her child led her to approach Rocky View Schools (RVS) with a proposal for an alternative learning environment – and with that, the Farm School was born. “School’s great – but not for my kids.
Dec 27, 2018 12:01 AM By: Airdrie City View 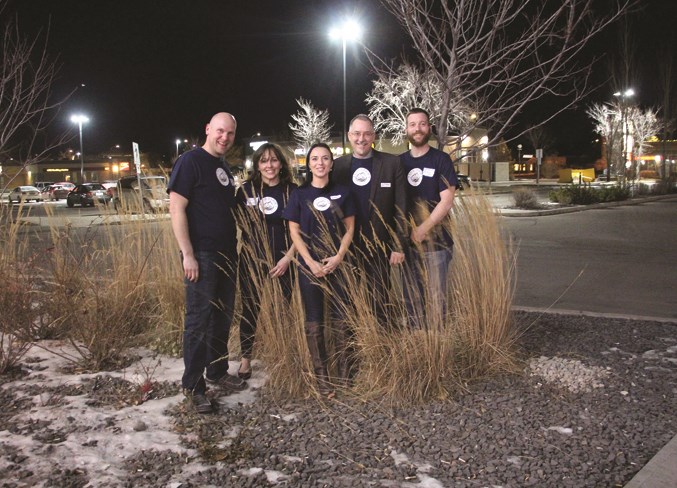 The organizing committee of Farm School, a new initiative of Rocky View Schools, held a community awareness event Dec. 17 for the program which will allow Grade 9 and 10 students in Airdrie to attend school on a farm beginning in September 2019.

A mother’s desire to make school fun and interesting for her child led her to approach Rocky View Schools (RVS) with a proposal for an alternative learning environment – and with that, the Farm School was born. “School’s great – but not for my kids. One of them really, really struggles. He’s a sweet little boy who just needs things done differently for him,” Lindsey Morrison, an Airdrie resident, said. “We talk about how there’s differences, but then we stick every kid in the exact same school program.” After working in daycare with RVS in both Airdrie and Chestermere, Morrison said she realized there had to be a better option for children who have difficulty learning in a traditional school environment. “When I started with the daycare, my little boy needed something different. I couldn’t find a place that was good for him…so I started before- and after-care [programs] with RVS,” she said. “Now that he’s in Grade 5, I don’t know what’s next for him.” A discussion with a colleague led Morrison to approach the RVS Learning Design Team with the idea of moving the classroom to a farm. Modeled loosely on the Building Futures program, which allows Grade-10 students to spend a year building two homes while still attending classes, the Farm School will strive to teach students a diversity of skills they wouldn’t get in a regular classroom. “They’re going to go to school on a farm, every single day. Instead of going to class, they’ll work on projects, do chores [and] build a business, basically,” Morrison said. “They’ll learn welding, business, just connecting with your community, canning – there’s so many different things that they just don’t know anymore. They’ll learn how to be functioning members of society and how to give back.” The hope is, she said, that students who attend the Farm School will find their passion – whether that be in horticulture, agriculture or business. Morrison said she decided to “rob Peter to pay Paul” by finding agriculture grants to fund the pilot project, since education funding is so scarce. “If we couldn’t find money for education, let’s find money in agriculture – and use it for education,” she said. “I went to RVS and they got behind it.” An organizing committee, including Morrison and various representatives from RVS, is working on launching the program in September 2019, with 20 students from each of Grade 9 and 10 in Airdrie, according to Mark Turner, a teacher with RVS. In 2020, Turner added, the program would expand to include 20 Grade 8 and 20 Grade 11 students – and by 2021, the hope is to have the program fully operational from Grade 7 to Grade 12. Turner, who currently teaches in the Building Futures program, said he hopes to also teach at the Farm School. “This is about going back to our roots and learning the basics of farming – what the heck do we have to do to grow food?” he said. “We are trying to co-create this program with the community. I think that’s the most exciting aspect of this opportunity.” And community members have stepped up to help. According to Turner, the organizing committee is developing an agreement with a local family to host the program on a 14-acre parcel of land just north of Veterans Boulevard – an easily-accessible rural environment. “We’re not experts; we just want to see education done differently,” Morrison said. “I know there’s interest in Cochrane and in Chestermere – and that’s what we want. We don’t want to be the only place doing this. Change it all. Change it everywhere.” More information about the Farm School is available from Sara Martin, RVS learning specialist, at saramartin@rockyview.ab.ca