Growing up in Cochrane, filmmaker Scott Westby shot his first indie film on a Handycam with some friends in the woods around the community.
Nov 14, 2016 12:00 AM By: Jessi Gowan 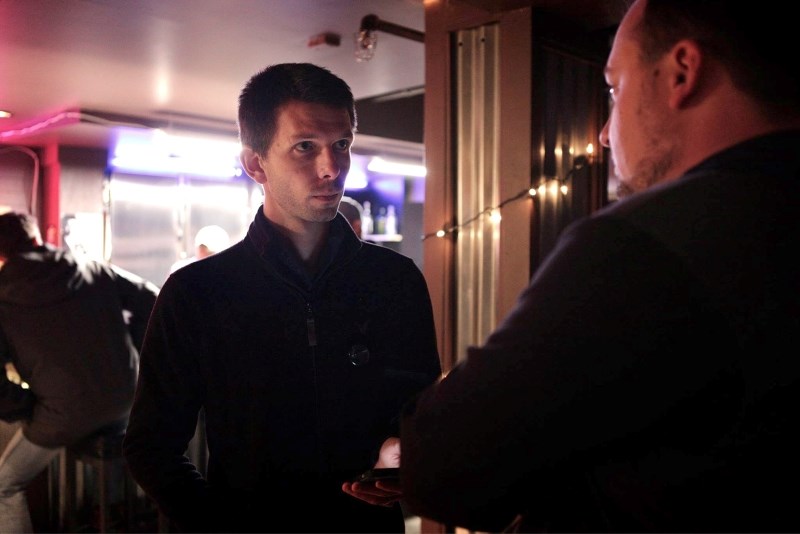 Scott Westby (left), who grew up in Cochrane, discussed an upcoming scene with partner Matt Watterworth during production of In Plainview. The film follows a dirty ex-cop seeking revenge on a former partner.

Growing up in Cochrane, filmmaker Scott Westby shot his first indie film on a Handycam with some friends in the woods around the community.

Now, Westby – along with his partner Matt Watterworth and their crew at Full Swing Productions – is working on post-production of their first feature film, In Plainview, after wrapping up more than two weeks of shooting in Westby’s hometown.

“It was amazing,” Westby said in an email to Rocky View Weekly. “There’s such a great level of confidence that comes from knowing the area around you. You’re able to be more resourceful, solve problems more easily and be more creative. It results in a better film.”

While the stars of the film, actors Shaun Johnston (Heartland, Bury My Heart at Wounded Knee) and Aaron Douglas (Battlestar Galactica, The Bridge), aren’t from Cochrane, Westby said the community still plays an important role in the film – through locations like the historic Perrenoud Homestead, Bow River Ranch, and the 111-year-old McDougall Church, located just outside of Morley.

“We didn’t get to interact with the public too much this time due to where we were filming, but it’s an incredible area that looks amazing on camera,” Westby said. “I just hope people have a great time watching it. The script was fun to read, the movie was fun to make, so I think we’re set up for success in that regard.”

The script, written by Alberta screenwriter Kevin Doree, follows the story of a dirty ex-cop who, upon his release from prison, seeks revenge on his former partner who sold him out.

According to director Matt Watterworth, the film is kind of a “dark comedy” with a mix of action elements, funny moments, and some violence and bloodshed.

“Now that we’re done shooting, we’re waiting to get the rough cut of the film so we can get some feedback from everyone involved in the process before we can cut together the final film,” Watterworth said. “We’re hoping to have that wrapped up by early 2017 so we can start showing it to people.”

The $250,000 production received more than half its funding thanks to the Micro-Budget Production Program from Telefilm, which backed 18 projects across Canada this year. Watterworth said theirs is one of three Alberta productions to receive funding, which he said should be encouraging for other local filmmakers.

“I think they recognize that there are talented people all over the country, so they have to make sure they spread it out a bit,” he said.

“We really made this film with the audience in mind, and I’d love to have it evoke some emotion in people. I think, as an artist, if you can do that you’re on the right track. You may not always hit every note correctly, but I think that as long as people are experiencing your film and feeling something, that’s what you go for.”