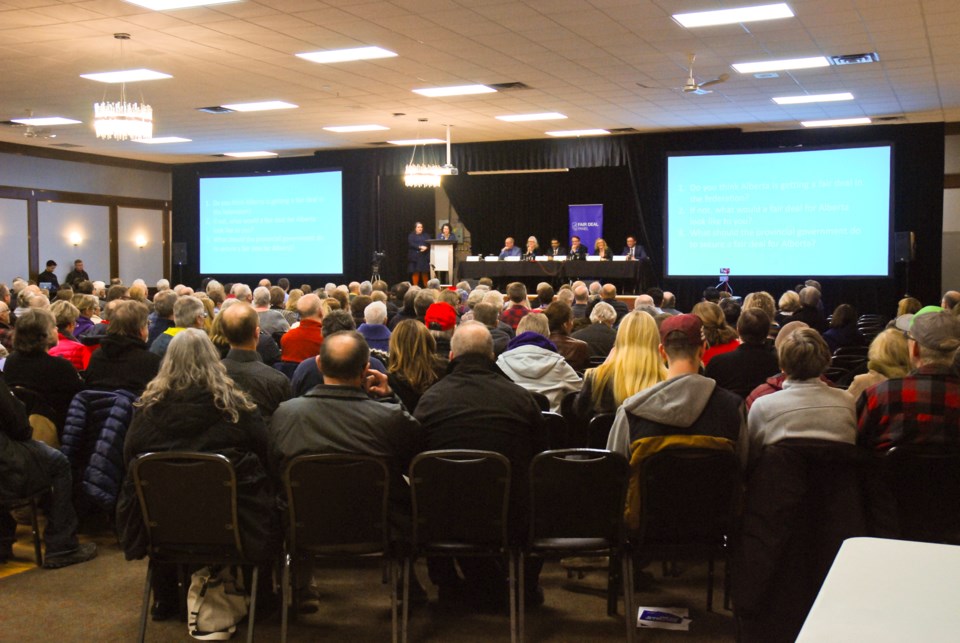 The Fair Deal Panel, held Jan. 27 at the Town and Country Centre, drew a large crowd of Albertans wanting to be heard. Photo by Allison Chorney/Airdrie Today

Locals and those from the Calgary area vented frustrations with the federal government Jan. 27, as the provincial government's Fair Deal Panel wrapped up its provincewide tour in Airdrie.

With attendees hailing from Airdrie, Okotoks, Cochrane and Calgary, and from all walks of life from rancher to politician, the overarching theme from speakers was anger and a desire for change.

"Certainly, I believe Alberta is the abused child of confederation...," Wendy Adam told the panel as she outlined her desire for equalization.

The call to reform long-contentious equalization payments – a type of federal transfer given to less wealthy provinces to equalize their ability to generate tax revenues – was heard repeatedly throughout the evening, though was not included in the nine possible actions being considered by the province.

"If we don't fix the fundamental problem of equalization, then, unfortunately, all of your time on this panel would have been wasted," said Peter McCaffrey, Alberta Institute president.

Spenser Matthews spoke of senate reform, highlighting what he sees as "hypocrisy in the system."

"I don't think there is a fair deal in constitution, and that is plain and simple – we are treated as a resource province that's meant to give and never receive," he said. "The only way there is ever going to be any change in that kind of arrangement is if there is representation in senate and higher bodies of our legislative government...."

He was joined by several others who shared their frustration with unequal representation, specifically taking aim at Ontario and Quebec.

"Canada belongs to everyone, not just Ontario and Quebec," said an unidentified female speaker. "Equal powers should be given to every province.... Between Alberta, Saskatchewan and Manitoba, we have only 62 seats...Ontario and Quebec [have] 199 seats. Quebec has 78 MP seats in comparison to the combined three Western provinces...which have only a grand total of 62 electoral seats. This leaves us with no say."

Separation was also suggested on numerous occasions throughout the event, with speakers citing a "hostile federal government," "Eastern overlords" and an "economic union broken beyond repair" as reasons to leave.

A speaker who only identified himself as Glen, a small business owner, said many Canadians feel that "killing the Alberta energy industry is necessary to save the planet from carbon dioxide emissions."

"That's why four out of the five major federal parties ultimately campaigned against the energy industry this past election," he said.

"This emissions propaganda war, which has crippled our energy industry, has now begun against our livestock industry, as well. All indications are the Liberals intend to continue phasing out our oil industry. We need to take action now. A fair deal in confederation would be great, but if that can't happen, we have to consider separation."

Other suggestions put forth by speakers included many of the nine actions under provincial consideration:

By putting some or all of these plans in place, Alberta Independence Party president David Campbell told the panel it would be "plowing the first furrow" toward "full departure from this abusive and incestuous relationship that is called confederation."

Certainly a minority at the event, less than five speakers offered differing or opposing perspectives to the possible Fair Deal actions.

Ruben Nelson said he loves Alberta and Canada, and compared the situation the province finds itself in to a fight between siblings.

"I've come to the conclusion that Alberta needs a mother. We holler...it's not fair, we want to make 'them' stop," he said. "In all of this discussion, there has never been a word about our contribution to the mess we're in."

Nelson said, in his lifetime, Alberta "has been run over by history several times, and every time we've complained that they did it to us."

An attendee who wished to remain anonymous out of fear of attack for a differing view, said she thought "a lot of people needed to vent."

Daryl Medd, who told the panel he had "fallen out of love with Canada," said he was surprised by the repeated calls for separation.

"I knew Albertans were angry, but I didn't know it was this strong," he said. "There is a stronger separatist sentiment in this room than what we're seeing in the polls. But I think it is a reluctant separatist sentiment because it's not that we want to separate from Canada, it's that we feel we're not going to get a fair deal unless it's really certain that we're going to separate if we don't."

The Fair Deal Panel will continue collecting feedback from the public via email to info@fairdeal.ca, and will submit a report on its findings by March 31.