Updated: Alberta to dole out federal funds for COVID-safe schools on per-student basis 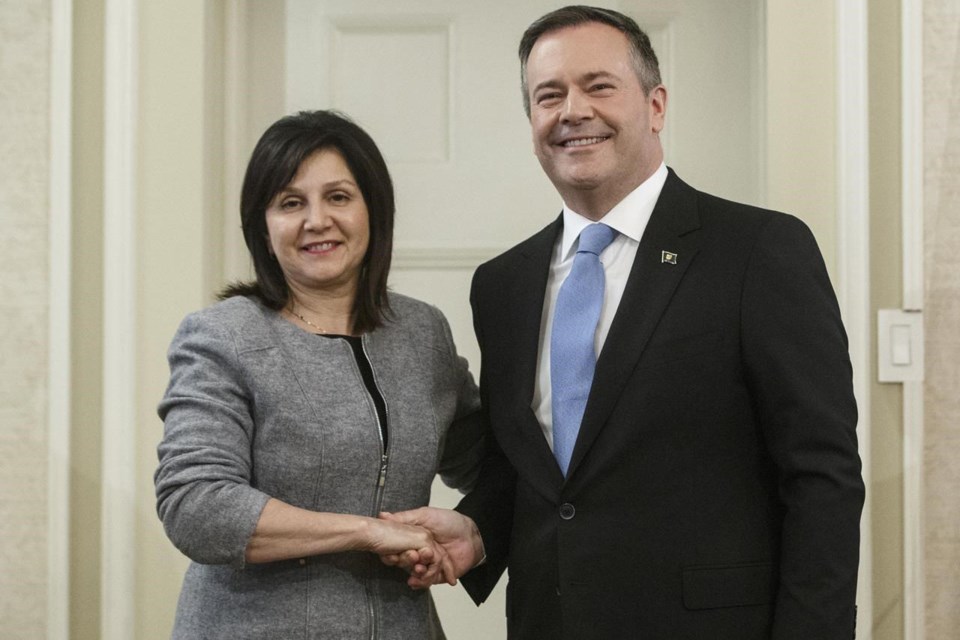 Alberta premier Jason Kenney shakes hands with Adriana LaGrange, Minister of Education after being is sworn into office, in Edmonton on April 30, 2019. The Alberta government says $262-million in federal money meant to help slow the spread of COVID-19 in schools will be dispersed equitably and quickly. Education Minister Adriana LaGrange says $250 million will be doled out to school boards on a per-student basis. THE CANADIAN PRESS/Jason Franson

EDMONTON — Alberta's United Conservative government says $262 million in federal money will be doled out equitably to school boards to help cover COVID-19-related costs, but the Opposition NDP says cutting class sizes should have been the priority.

Education Minister Adriana LaGrange said Wednesday that $250 million will be given to school boards on a per-student basis, representing about $350 per pupil for the upcoming school year.

LaGrange said she has spoken with school boards, disability advocates, administrators and other stakeholders about how the money from Ottawa announced last week to deal with COVID-19 in schools would be best used.

"Based on those conversations and the guidelines which the federal government has set out, I believe that this approach is the fairest and most equitable way to disburse the funding," LaGrange said.

The $250 million can only be used to cover COVID-19-related costs, such as cleaning, personal protective equipment and staffing.

The remaining $12 million is to support school authorities that are seeing a surge in enrolment due to increased demand for their online learning programs.

Classes at most Alberta schools resume this week.

The NDP has said it would have capped class sizes at 15 students, to ensure physical distancing, and would have hired the staff necessary to make that possible.

Alberta's school guidelines don't require two metres of space between students as long as they're seated at desks that aren't facing each other. Masks, which the chief medical health officer has said could get in the way of learning and communication, aren't mandatory during seated instruction.

LaGrange commended school boards that have made use of underused spaces such as gyms and libraries.

She said the NDP's idea is not realistic.

"We do not have a pool of tens of thousands of teachers out there waiting to be hired, nor do we have 800 new schools, which would be what would be required to reduce our class sizes in half."

Premier Jason Kenney said Tuesday that the NDP's class-size proposal would cost $4 billion and result in schools staying shuttered. He said COVID-19 cases in schools are inevitable, but that there are a number of protocols in place to slow the spread.

NDP education critic Sarah Hoffman said Kenney has overinflated what it would cost to "do the right thing and reduce class sizes."

Hoffman said her party estimates the cost would be $740 million, based on what school districts elsewhere have been able to achieve.

"Today, the federal money replaces about half of what the UCP has already cut in just their first two budgets," she said.

"The UCP would rather hand over billions of dollars to billionaires and incredibly profitable corporations and tell you that it's inevitable that your kids will get COVID, and that's wrong."

LaGrange said her department would ensure the money immediately flows to school boards as soon as it's received from Ottawa.

The funds are to be transferred in two phases — once in September and again later in the school year.

Hoffman said the government should have explained how it would be disbursing the money well before the start of school and added the full amount should be distributed without delay.

"They should be hiring staff now," she said. "These people should be there splitting classes and making it possible for us to do physical distancing in schools today."

Jason Schilling, president of the Alberta Teachers' Association, thanked the federal and provincial governments, and said the funding should be focused on urgent staffing needs.

"Teachers want schools to stay open, so we have to make sure the return to school is done as safely as possible," Schilling said in a statement.

— By Lauren Krugel in Calgary

This report by The Canadian Press was first published Sept. 2, 2020