Twists and turns were the story of the race to become the MLA for Chestermere-Rocky View, as Wildrose candidate Leela Aheer and Progressive Conservative (PC) candidate Bruce McAllister traded leads well after the majority of provincial ridings were d
0
May 11, 2015 12:00 AM By: Airdrie Today Staff 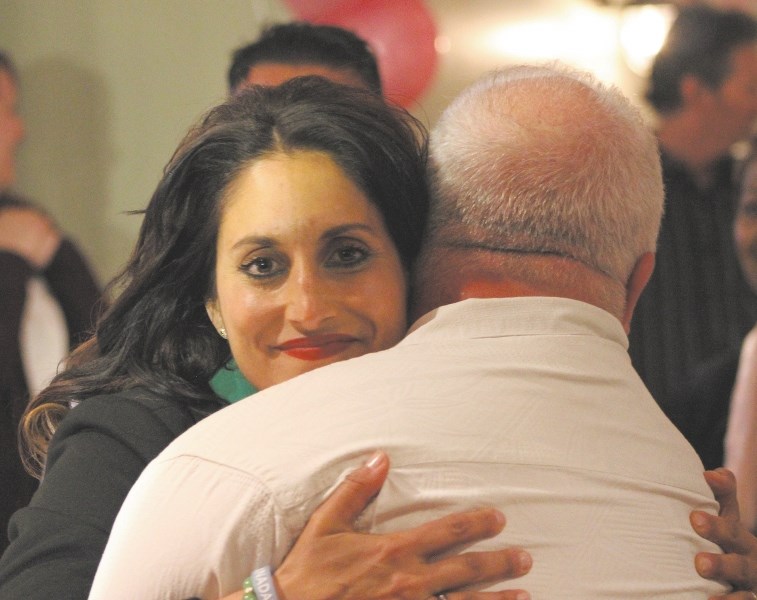 Leela Aheer hugged Campaign Manager Patrick Bergen and thanked supporters while she waited for election results on May 5 at Chestermere Landing. Aheer won the Chestermere-Rocky View riding for Wildrose over incumbent candidate and former-WIldrose member Bruce McAllister by a slim margin of 222 votes.

Twists and turns were the story of the race to become the MLA for Chestermere-Rocky View, as Wildrose candidate Leela Aheer and Progressive Conservative (PC) candidate Bruce McAllister traded leads well after the majority of provincial ridings were decided.

At one point as the race neared midnight on May 5, Aheer led McAllister by a lone vote. Wildrose supporters had gathered at Chestermere Landing to track the results.

“We knew this was going to be a nail-biter,” Aheer told supporters at the rally. “When the results come out, nobody is going to be more proud than myself of what we’ve accomplished as a team.”

“(At that point), we were in our pajamas, then we were all crying and screaming and oh my Lord, it was just insane. Even right now I can’t believe it. It was such a hard fight right to the end,” Aheer said. “(McAllister) phoned and he was so generous and so gracious.”

“I think (Aheer) will be a fine representative for Chestermere-Rocky View,” said Pelech. “We fundamentally disagree on quite a number of policies, including taxes and support for education, health, seniors and (other issues). But I’ve come to respect Leela as a dedicated and committed person and I wish her all the best.”

Controversy erupted during the campaign after PC hopeful Jamie Lall had his nomination disallowed by party executives. Party officials did not initially disclose the reasons for his disallowment, prompting dissension among some in the party.

Lall ran as an independent, placed fourth with 1,096 votes (5.29 per cent) and said he had no regrets about the campaign.

“It was a roller-coaster. I’m proud of the fact that I didn’t back down, I didn’t drop out and nor did our team,” he said. “(I’m proud) to be able to go out with my head high.

“Congratulations to Leela. I want to congratulate (McAllister) as well, the circumstances he was put in, he handled himself with class and he served the community well for the past three years. I think we had the best crop of candidates in the province.”

Coral Bliss Taylor, the Green Party candidate, received 415 votes (2 per cent) and said she would continue to be a voice for environmental issues moving forward.

“From the Green perspective, we want to make sure that we are being responsible with our environment,” she said. “(We need to focus) on our ability to change and grow in the long-term future, so I hope the (government) takes that into serious account.”

Rounding out the race was independent Matt Grant, who received 384 votes (1.85 per cent).

“There’s a lot raucous noise in the news. It’s hard to rise above that as an independent,” Grant said. “You have the floor-crossing issue, the (Lall) issue and the NDP scare tactics in the final week. But the people who did hear our message responded and responded in a good way. We got our message out to the people, and (from) the people that we did reach it was positively received.”

The riding was the last one to declare in the province. Earlier in the night, Rachel Notley was became premier-elect after the NDP won a majority government, claiming 53 out of 87 seats.

With Aheer’s victory, all remaining PC representatives who crossed the floor on Dec. 17, 2014, from the Wildrose party lost their seats in the election. McAllister did not return requests for comment by press time.

“I will do everything to earn the respect of the voters that did not vote for me,” Aheer said. “We will continue to maintain the conservatism of this province and make sure the (NDP) government is held accountable and fight to maintain low taxes.”

Election results will be made official on May 15 and new MLAs will be sworn in on May 26.