After a decade of fundraising, Wild Rose Humane Society (WRHS) finally opened the door to its new shelter in Didsbury, which will provide a safe place for small animals like dogs and cats to live until they are adopted into a new family.
Jun 26, 2018 12:01 AM By: Jessi Gowan 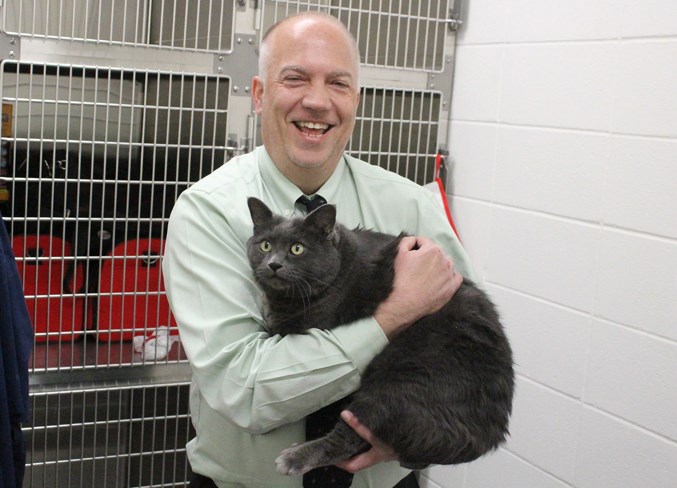 Dean Orlando, Wild Rose Humane Society president, with Tom in the cat kennel at the animal shelter in Didsbury. The shelter had its grand opening June 23.

After a decade of fundraising, Wild Rose Humane Society (WRHS) finally opened the door to its new shelter in Didsbury, which will provide a safe place for small animals like dogs and cats to live until they are adopted into a new family. “It’s really important because there’s not a lot of options in between Calgary, Red Deer and Cochrane, in terms of a humane society,” said Dean Orlando, WRHS president. “There are other groups that do some great work, like rescue societies and so on, but we’re a humane society and our goal is to reunite animals with families, or try to provide them with new families.” The society was incorporated in 2007, Orlando said, originally under the name Airdrie and District Humane Society. In 2012, around the time he said he started on the board, the organization rebranded to WRHS in an effort to expand service to the greater area, including Didsbury, Olds and Sundre. “Over the years, we’ve had volunteers and board members hold various events and fundraisers to make money – Canada Day celebrations, taking pictures with Santa with your pet or applying for grants with the Government of Alberta, which we’re very thankful for,” Orlando said. “We’ve also received donations from corporations and individuals in the community and, over time, we were frugal and built up the funds to purchase a building.” According to Orlando, WRHS bought the old Didsbury vet clinic in 2016, and spent the next 18 months renovating the facility to make it suit the needs of the society. The new shelter is large enough to house eight dogs and 15 cats, Orlando said – and three cats have already moved in. The facility is also equipped with a board room, which Orlando said will be used for meetings as well as education sessions provided free of charge to the public and kids or school programs. “We’ve been doing educational programs for about five or six years, working with organizations in Didsbury, Olds and Carstairs to help new pet owners,” he said. “I think it’s important to have that connection in the community and work with local stakeholders, like government, businesses and schools. We hope to continue reaching out to the community, to let people know that we are here and our services are available to help them.” Each year, Orlando said WRHS takes in dozens of cats, dogs and other small animals in need of fostering or adoption – and expects that demand will grow now that the shelter is open to provide housing for pets in the rural area between larger centres. He said WRHS plans to expand the facility as required. “There was definitely a need for something in the middle, to serve this community,” he said. “People won’t need to drive as far to find a new addition to the family – we’ll be able to offer a shorter drive for anyone looking to adopt a dog or cat.” Orlando added the society is also looking for volunteers to help on the board or simply with walking the dogs during the week. Sponsorship opportunities are also available, he said. Details about both can be found at wildrosehumane.ca