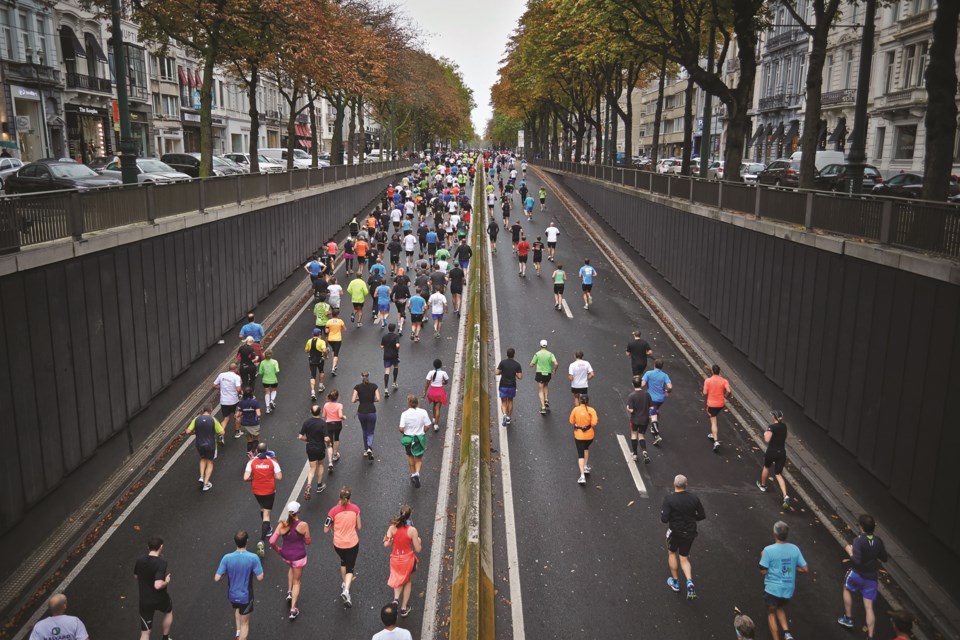 On March 3, students from St. Martin de Porres High School will join 17 countries that are participating in the Secret 3K, which aims to promote gender equality in sports and running. Photo by Martins Zemlickis/Unsplash

Local Airdrie school St. Martin de Porres hopped on board to champion the cause. Principal Elisé Saraceni said the school was excited to take part, as the run-athon will teach students and community members about ongoing gender equity issues.

“As part of our district’s focus on wellness and in addition to ongoing global gender equity issues, we see this film and our school’s upcoming three-kilometer walk/run event as a catalyst to present valuable teachable moments on this important topic,” she said, prior to the event being held.

As the run-athon shifted online and took place in more than 17 countries in 2021, co-founder and Cochrane resident Martin Parnell said the event was never more accessible to people than this year.

“In the old days, we used to hold it face-to-face in centres around Canada,” said Parnell, an accomplished ultra-marathon runner, author and motivational speaker. “We are coming up to over 1,000 participants. This event has really grown.”

Parnell said the event was inspired after he read a story about Zainab, the first Afghan woman to run in the Marathon of Afghanistan, in 2015.

“What shocked me was for Zainab, the challenges were kind of incredible,” he said. “Besides hydration, nutrition and maybe the weather, there was verbal abuse by mainly men trying to stop her from running. This kind of blew me away, that people were trying to stop women from running. There should be no gender bias against running ­– it’s a right we all have.”

As an avid marathon lover with years of running experience, Parnell said he wanted to support Zainab, which led to his participation in a marathon to support women and girls in Afghanistan in 2016. A collaboration afterwards with filmmaker Kate McKenzie and the owner of the Running Room John Stanton sprouted the Secret 3K.

The run-athon also supports four charities, including Canadian Women for Women in Afghanistan, the Marathon of Afghanistan, Girl Guides of Canada and 261 Fearless.

“It’s all about safe races and safe places,” Parnell said. “It’s about how we can support each other by going outside and doing three kilometers.”

According to Parnell, with the Secret 3K happening online this year, the growth of the run-athon meant the virtual adaptation was a natural fit.

“We also offer routes that go by culturally significant places. Every person who does the marathon is different,” he said.

The event also sparked a documentary, which was completed in early 2019 and is now available for screenings, along with a book, both titled The Secret Marathon.

Parnell said having schools like St. Martin de Porres and other organizations get involved was a huge step. Last year, St. Veronica School in Airdrie participated, with students collectively running more than 1,900 in laps around their gymnasium.

“This year we have had fantastic support from the Calgary Catholic School Division,” he said. “St. Martin de Porres is having a big day for the event. There are people involved who are really pulling things together for that school.”

Gender inequality is something that still exists everywhere, according to Parnell, and people need to do their part to speak out about it.

“We have to say no, this is not right,” he said. “You can’t be judged based on your gender, race or culture. This is something that is going to take a long time. This isn’t going to get fixed by us having this event. However, we’ll build up a knowledge base and people will start learning about this.”