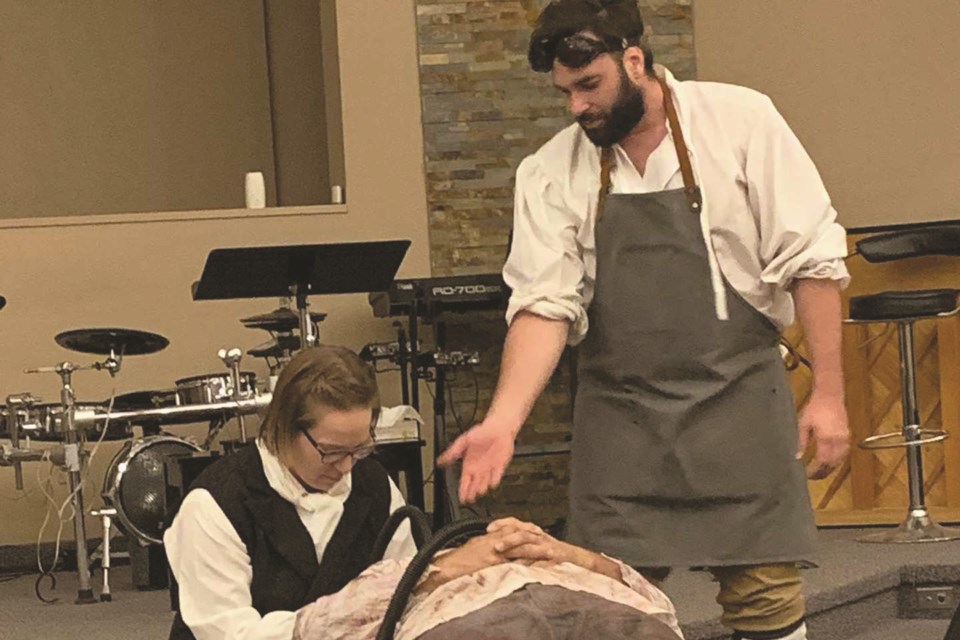 Just in time for Halloween, Nose Creek Players (NCP) will kick off its 2019-20 season with an adaptation of Mary Shelley’s classic horror story Frankenstein, Oct. 18 and 19 at Bert Church Live Theatre (BCLT).

“Any time you have the opportunity to experience…performing arts of any kind, it’s a great opportunity to help build culture within your community, so we’re excited to be part of that and hope people come out,” said Robin McKittrick, president of the local theatre company and director of the play.

In planning the new season, NCP’s board wanted to mount a production celebrating the Halloween season, according to McKittrick. The company had an audience vote on two horror classics – Frankenstein and Dracula – and the overwhelming majority wanted to see NCP’s take on Shelley’s tale about a scientist who gives a creature life before casting it aside.

“There were several different adaptations that we read over the course of the summer and we settled upon this one, written by Alden Nowlan,” he said. “It is very, very true to Shelley’s original story. When the audience comes, they won’t be privy to the Hollywood take on Frankenstein, but more so, the literary representation of the creature.”

According to the play’s program – available on NCP’s website nosecreekplayers.com – “the story discusses notions of sympathy and rejection and creation and destruction.” Rather than the jump-scares and gore of modern horror, McKittrick said, the terror of the play is reflected more in the loneliness and desolation experienced by the characters.

NCP’s 14-member cast and six-person crew have been hard at work preparing the drama since the summer, in anticipation of the new season. The cast includes several actors who have been involved in previous NCP productions, as well as a few rookies, according to McKittrick.

“That’s incredibly important for the sustainability of the company, is to bring in new people,” he said. “Hopefully, we continue to draw new people. We’re always hoping that if someone comes to see a show, it might tweak something and pique an interest.”

The play will run at 7 p.m. both nights, with an added matinee at 2 p.m. Oct. 19. Tickets cost $20 and are available on NCP’s website, or by searching “Frankenstein” on ticketpro.ca

McKittrick noted, while the play is not necessarily terrifying, it does contain some mature content like violence and horror elements, and may not be suitable for children younger than 12 years old.

“It obviously depends on the children and the parents and where they are in terms of maturity or their developmental level,” he said. “For a younger audience, there’d definitely need to be some conversation that would need to happen.”

Audiences should also be aware that the production includes the use of a fog machine and flashing lights, McKittrick said.

Frankenstein is the first of four plays NCP will mount this season – which will also see the company will host the Foothills Regional One Act Play Festival for the first time.