The Skeletons of King’s Heights displays many Airdronians have come to know and love will soon come to an end.
Oct 30, 2020 4:00 PM By: Jordan Stricker 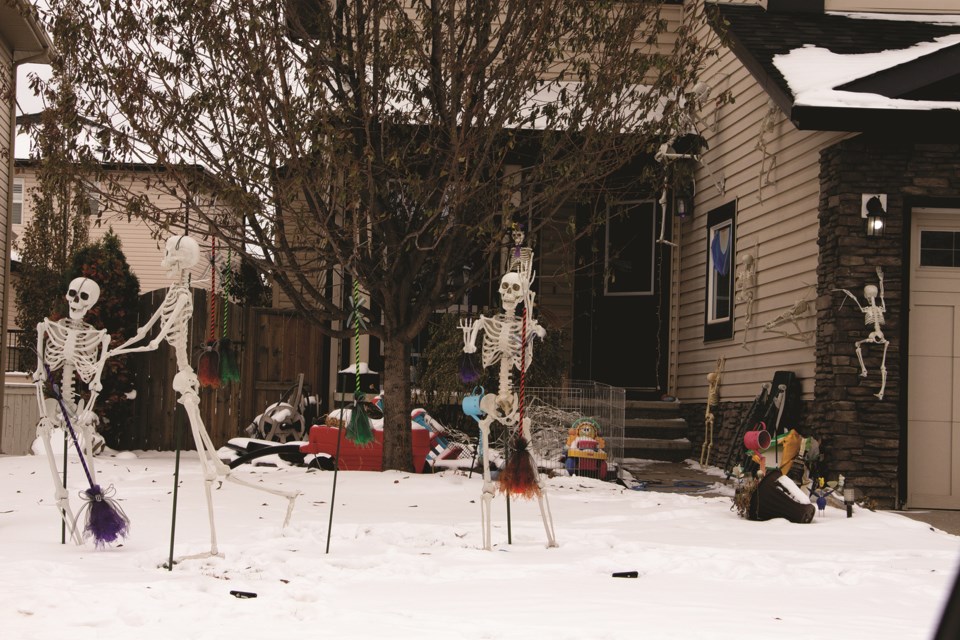 A skeleton display in King's Heights, which changes every week, has reached its final installment. Photo by Jordan Stricker/Airdrie City View

The Skeletons of King’s Heights display many Airdronians have come to know and love will soon come to an end. Lisa Rowley, the homeowner and mastermind behind the display, said she would soon be selling her house and moving to Calgary.

After living in King’s Heights for around six years, Rowley started creating the full-time displays about a year and a half ago. The displays on Rowleys lawn have ranged from the skeletons doing the limbo to them sporting Pride colours. The idea for the displays took place gradually, and Rowley traced its genesis back to 2017 when she installed skeletons for Halloween.

“Halloween has always been my favourite time of year,” Rowley said.

That year, Rowley was too slow to take the decorations down. She said it got too cold, and instead, she dressed one of the skeletons in a Santa Claus suit and called it a Christmas decoration.

In 2018, she placed ears and a tail on one of the skeletons, so it resembled a rabbit in time for Easter. Rowley said that display got people’s attention and not long after, she decided to start changing the theme every week. Rowley’s Facebook page dedicated to the skeleton displays has amassed more than 1,000 followers.

Rowley said 2020 has not been an easy year for anybody, but she still enjoys putting up the displays because she knows they bring a smile to people’s faces.

“It’s hearing my dog barking at the window all day long because there are people on the sidewalk looking,” Rowley said. “It’s all the messages I get on Facebook. Even if I am having a bad day, knowing that what I have done potentially has helped someone else have a better day makes me feel better.”

Unfortunately, 2020 has also been challenging for Rowley. Difficulties brought on by the COVID-19 pandemic caused her to decide to sell her house and move to Calgary with her two teenage children.

“I lost my job in April,” Rowley said. “I was thankful enough to find another job a few weeks later, but I have not been making near as much as I was before. I have been able to do some renovations and do what I have to do to get it listed.”

She added her current job is a contract position and will soon come to an end. Rowley said relocating to Calgary is the best choice for her family at the moment.

While Rowley hunts for another job, she and her children will live with her parents. She added she hopes to continue the skeleton displays in Calgary during this transitional period.

“I will have to wait and see how it goes,” she said. “If I win the lottery I will stay and keep doing it.”

While many Airdronians will be sad to hear of the end of the skeleton displays, she said they aren’t over yet. Rowley just completed her final installment for Halloween, which she will leave up for everyone to see.