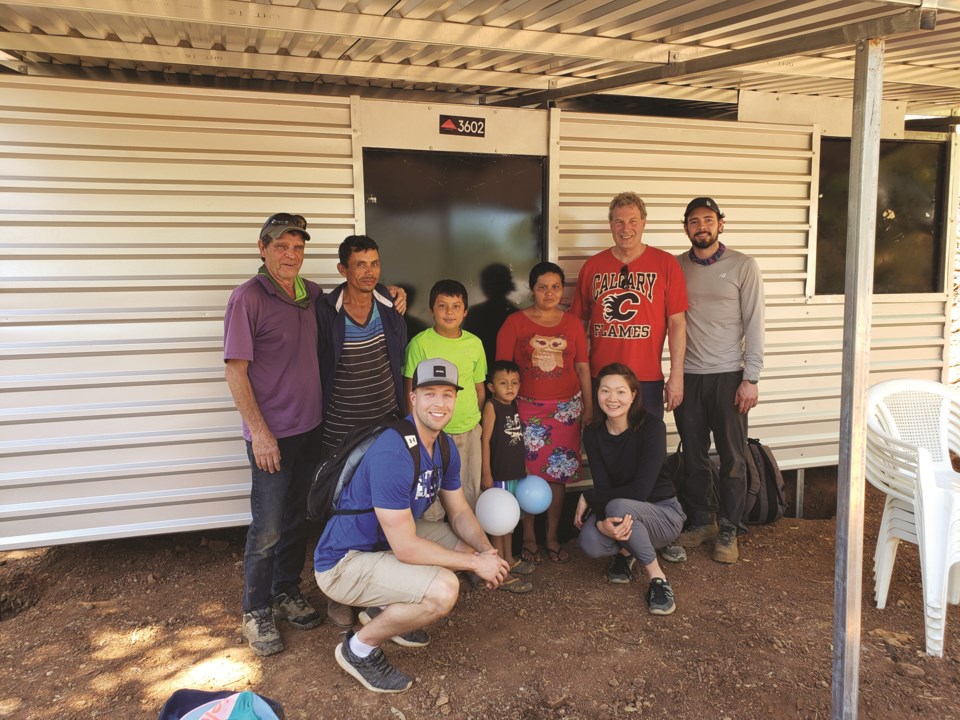 Paul Holmes (back, second from right) and his son Joel (front, in blue) with a family who moved into one of the homes built by Shelter Canada on a recent trip to El Salvador. The trip was dedicated to the memory of Holmes' youngest son, David. Photo Submitted/For Airdrie City View.

For retired teacher Paul Holmes, a recent humanitarian trip to El Salvador played a significant role in the healing process following the loss of his youngest son.

The genesis of the trip took place in the fall of 2019, he said, when Shelter Canada’s president, Airdrie resident Jim Noble, reached out and suggested he participate.

“He was aware that we had lost our son, David, to suicide almost two years ago,” Holmes said. “He shared with me that he had lost his own son almost 20 years ago; [he] also took his life. What he shared with me is that, through becoming involved with building houses in Central America, and specifically El Salvador, he had found it to be a very healing experience for him.”

Holmes, along with his son Joel, committed to the trip shortly after that conversation.

“Through myself and another generous person, my personal costs were covered, but then there’s the expectation that people who go try to raise enough money for one house to be built,” Holmes said. “The cost of building a house is $3,400.”

Through community support, including a fundraiser at Cooper’s Crossing School – where Holmes taught before retirement – a donation box at a local A&W Restaurant and a sizeable donation from an individual, Holmes and Joel raised $7,777 – more than enough to cover two houses.

The team – comprised 15 other Albertans from Calgary, Airdrie and Wainwright – left for El Salvador Feb. 1 and returned Feb. 8. They stayed in the San Vicente area, which Holmes said is about an hour away from the capital, San Salvador, and built houses in the surrounding rural areas.

According to Holmes, the families that eventually occupy the homes complete an application demonstrating their need, then put a small amount of money toward the house and assist in its construction.

“It was fabulous for me to see the transforming effect of building a house for people in that area,” he said.

Holmes said he was particularly moved that one of the homes he helped build was for a 22-year-old and his wife, which is the same age David was at his passing. The couple also had a baby whose second name was David.

Turning his grief into something positive for other people was a key aspect of the trip’s healing effect, he said, as was spending time with Joel and strengthening that father-son bond. For Joel, the trip was an opportunity to support and bond with his father.

“I knew it was really important for my dad, and I knew he had a vision for the trip and had a big idea of how, emotionally, it would work for some healing for him,” he said.

Holmes, a Christian, said the trip also edified his faith.

“To be very open, it would feel like I had a heavenly father who was saying, 'I understand your grief,'” he said.

Two of the houses were dedicated to David’s memory, who Holmes described as a bright and selfless young man who had planned to become a doctor with Doctors Without Borders to help others.

“While David, in many ways, was consumed with big picture issues and the state of the world,” Holmes said, “one of the times he was happiest in the last year of his life was when he went on a house-building mission to the Dominican Republic.

“I think David would be really thrilled that these homes were built in his name.”