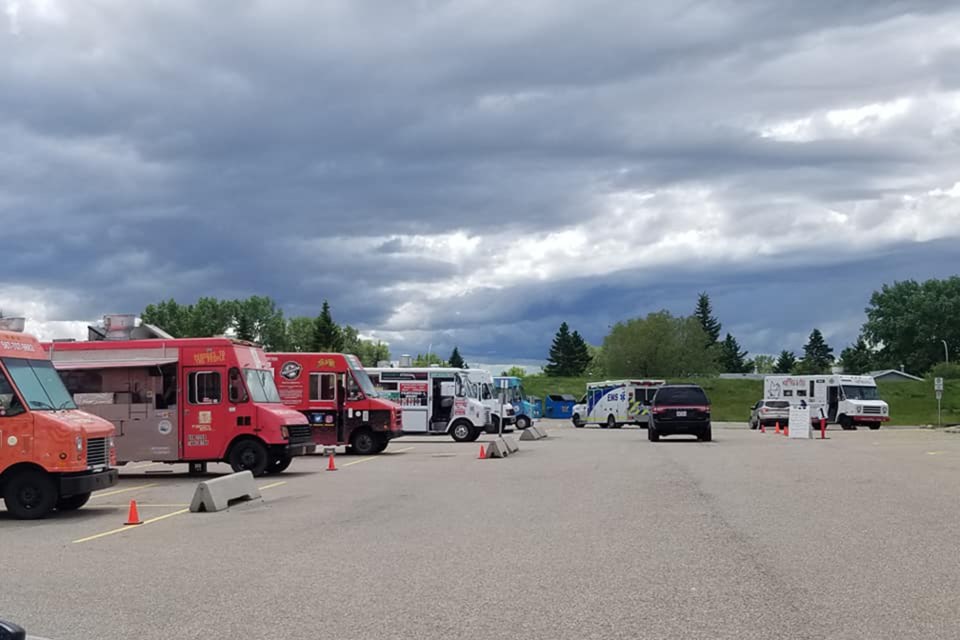 For the second time this summer, Airdronians can dine out at their favourite food trucks during the Drive-Thru Food Truck Frenz-Thru event hosted by the Airdrie Farmers’ Market (AFM).

“The food truck drive-thru event is exactly what it sounds like,” said AFM manager Candace Kolson. “You drive through like you would any pickup window. You pull up, you stop, you give them your order, you stay in your car, they give you your food and away you go.”

This month’s event will feature 10 trucks serving a variety of food, from Italian cuisine to poutine to perogies to fish tacos. Some trucks will also serve desserts and beverages including lemonade, mini donuts and edible cookie dough.

“We’re trying to keep it so that every truck has something a little bit different,” Kolson said.

According to Kolson, customers will drive through the parking lot in a single direction. Menus for all the trucks will be available near the entrance, allowing diners to decide their orders before they line up for each truck. Menus will also be available on airdriefarmersmarket.com

From the menus, drivers will pull up to their desired truck.

“It’s kind of like one giant U shape,” Kolson said. “You enter one way and you exit the other way, and in the middle of the U, cars pick each truck they want to drive into.”

Kolson said customers can cycle through the parking lot as many times as they want until each passenger has had a chance to order from their favourite food truck.

There is no stopping or parking on-site, Kolson said, emphasizing customers will not be permitted to exit their vehicles.

AFM staff and truck employees will be abiding by common health and safety guidelines, Kolson said, either maintaining two metres of distance or, if that is not possible, wearing masks and gloves.

“You may not see all [truck employees] mask up,” she added. “It would just depend on what their requirements are from AHS. That’s something that’s a little bit out of our realm.”

Trucks will be accepting all forms of payment, Kolson said.

The drive-thru events have replaced AFM’s popular Food Truck Frenzies, which have been suspended this summer due to COVID-19. Prior to the beginning of AFM’s season, Kolson told Airdrie City View the Food Truck Frenzies had been cancelled for the year.

“Due to COVID, Alberta Health Service (AHS) and the province of Alberta had cancelled events all over the province,” Kolson said. “In doing so, we were hamstrung a little bit with the Food Truck Frenzy that we would normally host at the farmers’ market on Wednesdays.”

Food trucks were equally challenged, as they were no longer able to set up as they normally would, Kolson said. After being approached by food truck owners, AFM devised the drive-thru events as an alternative and “scrambled” to find a lot big enough to accommodate the trucks and customers, and eventually landed on the parking lot at the Ron Ebbesen Arena.

AFM’s first drive-thru food truck event in June was a success, Kolson said. Over the course of the weekend, more than 1,000 cars showed up. She attributed the popularity of the event to people looking to get out of the house after months of self-isolation. With several community events and programs cancelled, she believes events like the Food Truck Frenz-Thru are giving Airdrie residents something to do.

“For a long time, we were really limited in what was open and what was out there for choice,” she said. “In those early stages, definitely any time you’d see something different, you were in your car and on your way because you’d been stuck at home for so long.”

Kolson said another drive-thru food truck event is planned for August. With the rapidity at which restrictions and guidelines can change, she was unable to say whether a Food Truck Frenzy would take place on a Wednesday during the farmers’ market, although she added it would be unlikely.