Four firefighters from the Airdrie Professional Firefighters Association (APFA) will brave the elements for 72 hours Feb. 20 to Feb. 23, during the association’s sixth annual Rooftop Campout for Muscular Dystrophy.
0
Feb 21, 2019 12:01 AM By: Scott Strasser 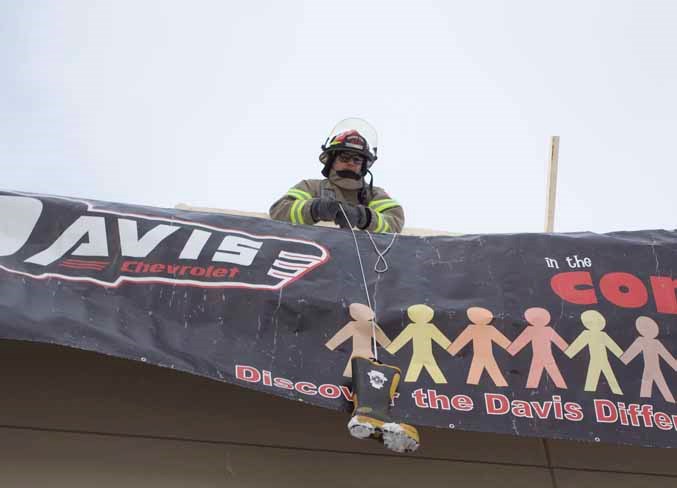 Firefighter Chris Addy hoists a firefighters boot to the roof of Toad &#8216;n&#8217; Turtle Pubhouse and Grill Feb. 20. Donations can be placed in the boot during the sixth annual Rooftop Campout for Muscular Dystrophy until the firefighters come down Feb. 23.

Four firefighters from the Airdrie Professional Firefighters Association (APFA) will brave the elements for 72 hours Feb. 20 to Feb. 23, during the association’s sixth annual Rooftop Campout for Muscular Dystrophy. Firefighters Rob Dawson, Mike Sowerby, Jimmy Vu and Chris Addy will stay in tents atop the roof of the Toad ‘n’ Turtle Pubhouse and Grill, in Kingsview Market. The quartet will be lowering a boot tied to a rope to collect donations in support of Muscular Dystrophy Canada (MDC) from observers and passersby throughout the campout. “It’s a very worthy cause,” said Dawson, who has been with the Airdrie Fire Department for 15 years. “It’s been a great success for us and for [MDC] for the last five years. We’ve had such incredible community support with this initiative.” The event typically raises between $15,000 and $20,000 each year, according to APFA, and has raised more than $81,000 cumulatively since 2014. Last year was the most successful year yet, according to APFA, with $22,000 raised. For Dawson, this year will mark his second time participating in the annual initiative, after taking part in 2015. “There haven’t been too many guys go up there twice,” he said. “It’s kind of a big commitment to go up there for three days, especially [because] almost every one of our guys has a family. “This will be my second time, and I think after this one, that might be it for me.” Though the plummeting temperatures, which resulted in Environment Canada issuing Extreme Cold Warnings in Airdrie and area, have passed, the firefighters can still expect to endure chilly weather throughout the event. According to current predictions from Environment Canada, temperatures are expected to dip to -23 C Feb. 20, and the warmest day is expected to Feb. 22 with a forecast high of -2 C. “It looks like this year, we’re going to be in for pretty cold weather,” Dawson said. “I’m keeping my eye on [the forecast], for sure.” Any short-term discomfort felt by the firefighters is more than worth it in the long run, according to Dawson. “That’s part of the point of doing this – for us to put ourselves in a little bit of an uncomfortable situation so people can recognize that we’re up there for our chosen cause,” he said. “For us to be up there for 72 hours with a little discomfort is nothing like living your whole life with Muscular Dystrophy.”