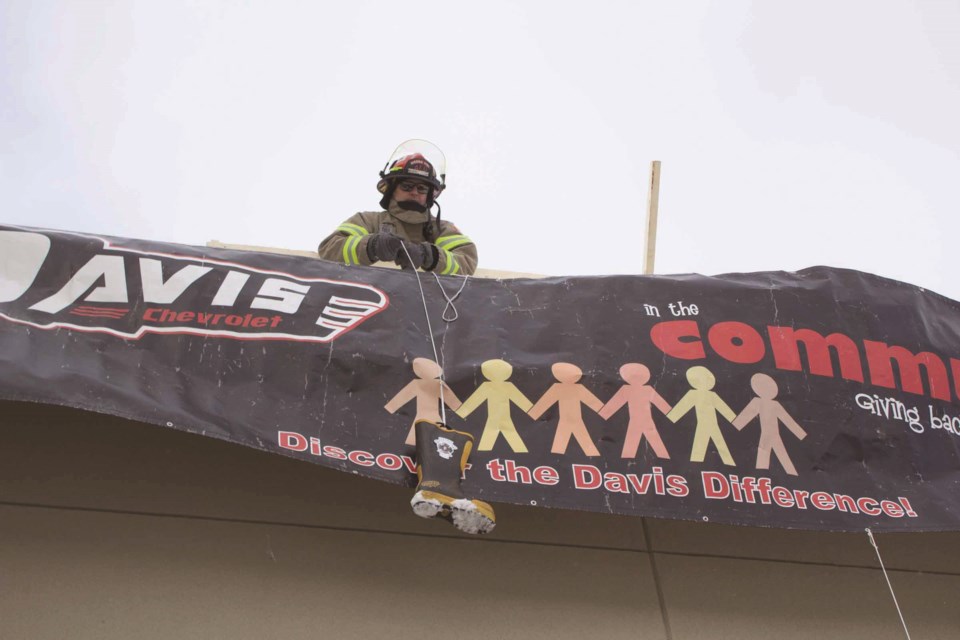 A group of Airdrie firefighters will once again spend time camping in the cold on the roof of Toad 'n' Turtle Pubhouse & Grill to raise money for Muscular Dystrophy Canada. File Photo/Airdrie City View

Four local firefighters are preparing to hunker down for a four-day camp out to support Muscular Dystrophy Canada.

“I’m excited,” said firefighter Travis Smutt, who will participate in the annual camp out for the third time after stepping forward to fill a last-minute vacancy. “These are always a fun time – they’re long, and they can make for some not very good sleeping conditions when the temperature does drop, but I’m excited to get up there so that we can try to raise as much money as we can.”

According to Andrew MacPherson, charities co-ordinator for the Airdrie Professional Firefighter’s Association (APFFA), the annual Rooftop Campout for MD – in Airdrie for its seventh year – sees a group of firefighters confined to the roof of Toad ‘n’ Turtle Pubhouse & Grill for 72 hours in an effort to raise funds and awareness about muscular dystrophy. Camping in the frigid February weather, he added, is meant to mirror the experiences of a person living with the neuromuscular degenerative disease.

“When you have muscular dystrophy, you lose the ability of your muscles,” MacPherson said. “Being up there on the roof, the guys are in the cold and it simulates the same kind of idea, so that they know what these people go through.”

Along with Smutt, Justin Furhiman will participate for the second time, while newcomers Billy Dowling and Isaiah Hoeppner will experience the camp out for the first time. Approximately 20 different Airdrie firefighters have participated in the fundraiser since it began in the city.

In his past two camp outs, Smutt said he’s experienced a mix of weather, with some nice days and some cold ones.

“The last year I was there, I believe we had a snowfall come in during the night, and the snow was so heavy that it collapsed our tents,” he said. “Waking up with your tent stuck to your face is not very enjoyable.”

Despite that experience, Smutt said a part of him is hoping for cold weather this year.

“People feel a little bit more giving when we’re sitting out there when it’s -30 C,” he said. “For the sake of the charity event, I hope it’s kind of cold, but for my own comfort, I kind of hope it’s warm.”

The fundraiser has been well-received in the community, MacPherson said, with more than $98,000 raised for the cause since 2014. This year, he said, $8,000 has been raised in corporate sponsorships, and the firefighters hope to raise at least $23,000, which would surpass the fundraiser’s previous best single-year.

A significant amount of funds are donated by the public, he said, who can either donate online at airdriefirefighters.com, or directly to the group of campers who will lower a boot to collect donations – by far the more popular option, he added.

A number of events are planned during the camp out. The fundraiser will begin with opening ceremonies Feb. 19 at 11 a.m., at which point the four firefighters will summit the building. Fitness classes are planned for the group – MacPherson said details are still being worked out – while the public can enjoy a silent auction and live music night Feb. 22.

For the first time, MacPherson said a pancake breakfast – available with a donation – has been added to the slate of events associated with the camp out, which will take place Feb. 22 from 8 to 11 a.m.