A large mural adorning the façade of an auto restoration shop will be Beiseker’s newest piece of public art.
Sep 16, 2020 7:00 AM By: Ben Sherick 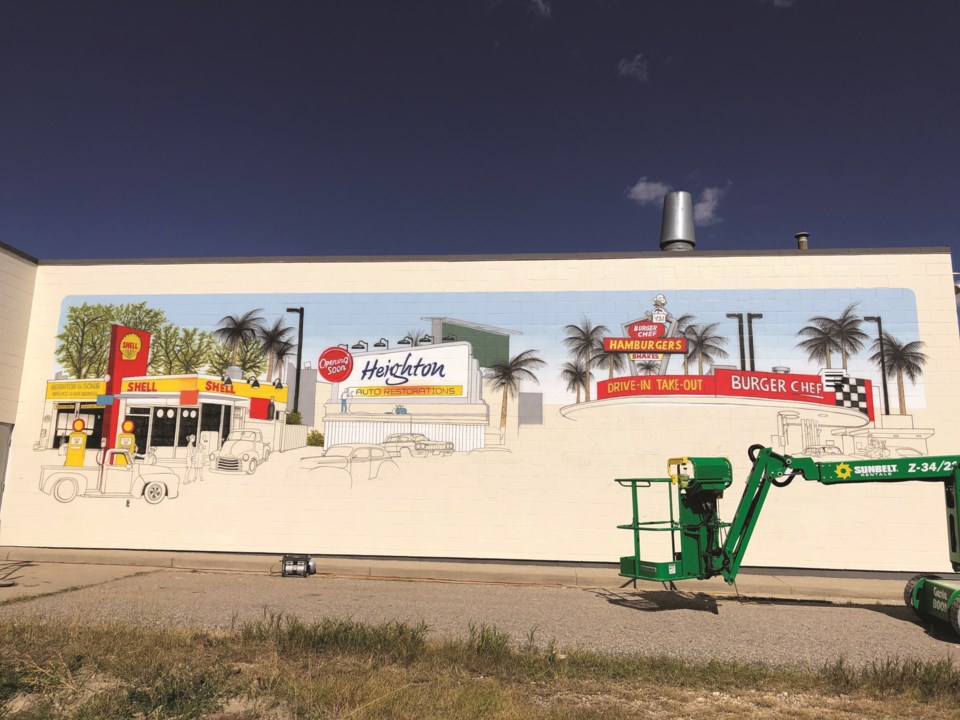 A large mural adorning the façade of an auto restoration shop will be Beiseker’s newest piece of public art.

“We had this big, blank canvas on our south-facing wall,” Heighton said. “I kind of thought it would be neat to make use of that and put up a big mural to help celebrate that we’ve been here the 25 years and also to show off some of our finished builds.”

The 51- by 14-foot mural was designed and painted by Didsbury artist Dwight Lockhart, who Heighton called “one of the top artists in Alberta.” Heighton estimated by the time the mural was finished, Lockhart will have spent 10 days painting it.

Once complete, the mural will depict a retro scene featuring palm trees, an old Shell gas station, a drive-in diner and Heighton Auto Restoration. Notably, it will also feature several vehicles that are all actual cars and trucks Heighton has restored over the years.

“It’s a drive-in theme as well, so there’s girls on roller-skates serving food and drinks to the patrons in the cars on the street,” Heighton said.

In total, 13 vehicles will be painted in the mural.

“We’ve got a 1967 Camaro Pro-Touring car that has done really well racing in the United States… We’ve got a 70s ‘Hemi’ ‘Cuda on there that has gone to the [International Show Car Association (ISCA)] finals in Houston and placed fourth in North America,” Heighton said. “We’ve got a ’64 Corvette pro street car ­– it’s also gone to the ISCA finals.”

Heighton anticipated the mural would be finished by Sept. 14 at the latest, after press time.

Originally located in Calgary, Heighton moved his shop to Beiseker on Sept. 25, 1996. He said the cost of running his shop combined with “the hustle and bustle” of the big city prompted him to relocate.

“I wanted to get out of the city, and I just found the right building in Beiseker,” he said. “It was a fixer-upper, the price was right and that’s what brought me to Beiseker. I knew nobody.”

Heighton has since made the village his home, and his business has been embraced by the community.

He added he hopes the mural becomes a conversation piece.

“It’s something that when people drive into Beiseker and they’re driving through the village, they’ll stop and take pictures,” he said.

Even before it was complete, Heighton said, people have stopped to admire the art.

“Some people that I know who own classic cars, they already want to do photos in front of it when it’s completed,” he said. “You can do a photo in front of this mural and it’ll look like you’re part of the mural.”

Heighton said he plans to have more murals painted on the other side of the building next year, and hopes he’ll inspire other pieces of public artwork in Beiseker.

“Maybe some other people in town will get on board and we can do other murals on other buildings in the village,” he said.