The Alberta Institute for Wildlife Conservation (AIWC) has been running a 50/50 cash raffle to raise funds to support its effort to continue saving injured and orphaned wildlife.
Oct 19, 2020 4:00 PM By: Jordan Stricker 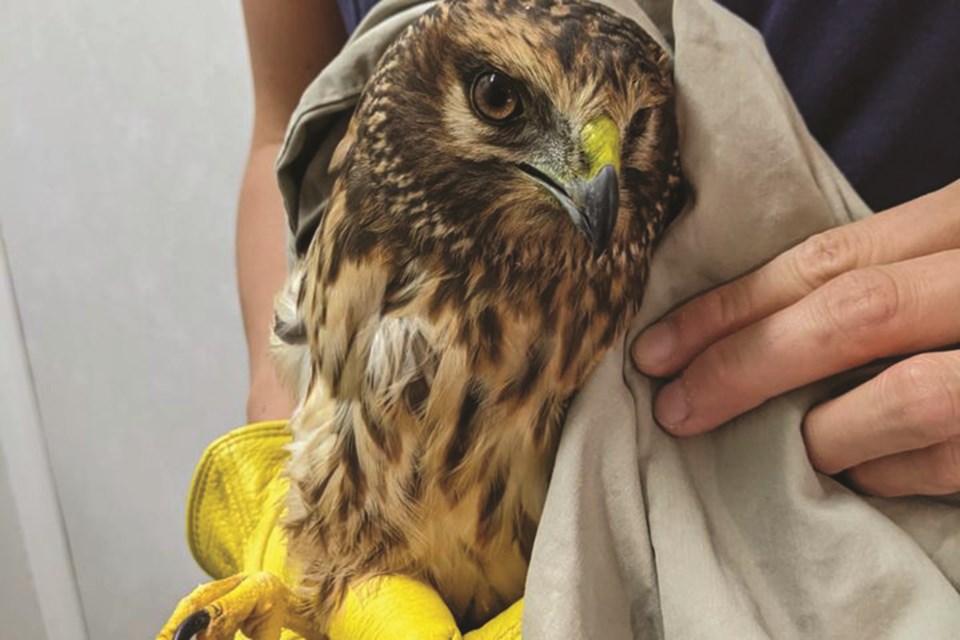 Funds from a 50/50 raffle will be divided between one winning ticket holder and the Alberta Institute for Wildlife Conservation, which will use the money to care for orphaned and injured wildlife like this Northern Herrier owl. Photo submitted/For Rocky View Weekly

The Alberta Institute for Wildlife Conservation (AIWC) has been running a 50/50 cash raffle to raise funds to support its effort to continue saving injured and orphaned wildlife.

According to Executive Director Holly Lillie, the institute’s goal is to raise $20,000 before the raffle concludes Oct. 24. Half the funds will be given to one winning ticket holder and AIWC will keep the rest.

“We have been planning this for most of the summer,” Lillie said. “People have been really receptive to it. We always appreciate the support.

AIWC – which is located northwest of Airdrie, near the hamlet of Madden – has operated in wildlife conservation since 1993. As an accredited veterinary clinic, it takes in injured and orphaned wildlife.

Lillie said the non-profit organization has had to be creative in its fundraising efforts, especially in a year marked by a global pandemic. AIWC is grateful people are always willing to help, even when times are tough.

“It is a very difficult year, obviously,” Lillie said. “People are going through really tough financial times and we appreciate that. Any support is appreciated.”

The support is especially important, she said, as the number of animals the clinic cares for each year continues to rise due to human contact with nature. As the human population grows, so does the need to help injured or orphaned wildlife.

“We have seen a 30 per cent increase for admissions into the hospital,” Lillie said.

According to Lillie, AIWC has already taken in 1,951 animals this year. That number surpasses the 1,481 animals the clinic cared for in 2019.

By Aug. 1, AIWC had already taken in more animals than it had last year, she added. Besides increased contact between wildlife and humans, the pandemic has also pushed more people outdoors, which may be another reason for the rise in admissions.

“Partially, it’s because people are staying close to home, but they are starting to explore their own backyards,” Lillie said. “They are going to the mountains more, going to the countryside or just being more active in their communities.”

In some cases, the animals may have been orphaned or injured regardless, but might not have been found and taken to the clinic, or people may not have had the time to research where to take the animals.

“There is a lot of layers to it,” Lillie said. “It will be interesting to see what happens in subsequent years because we do put a lot of investment into education.”

While the pandemic has hit everyone differently, Lillie said she and the team at AIWC are grateful the clinic was deemed an essential service so they could continue to care for the animals.

“We were really unsure about how things would progress,” Lillie said. “While we were worried about animals in care, we were also worried we would not be deemed an essential service. Our primary concern was having several animals at our hospital and not being able to care for them because we had to close.”

Lillie said donors stepped up during the pandemic to help meet the need – another positive that has helped AIWC weather COVID-19.

“We have been able to keep our doors open, which is fantastic,” she said. “As with any non-profit, that challenge is ongoing and we have identified that, but we have been secure this year and that is a huge relief.”