Airdrie resident Mike Loughman is hoping the community will support his nomination for the Lieutenant Governor of Alberta’s True Grit award by sending in emails of endorsement before the deadline of June 30.
Jun 21, 2018 12:01 AM By: Jessi Gowan 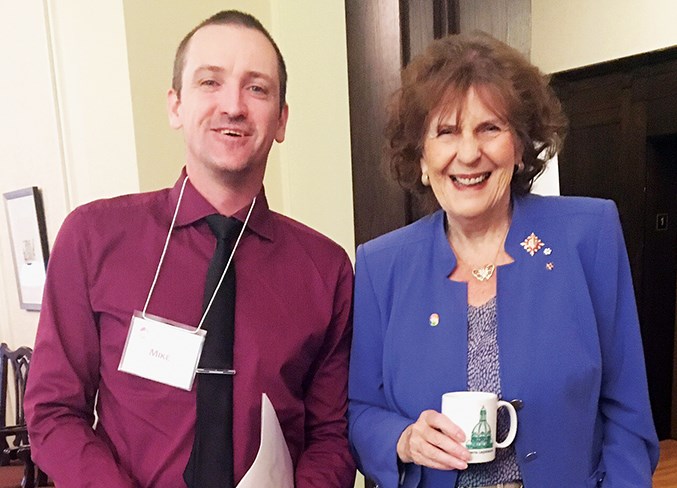 Mike Loughman met the Honourable Lois Mitchell, the Lieutenant Governor of Alberta, at the presentation of last year’s True Awards. He is nominated for the True Grit award again this year, and is hoping the community will provide letters of support to endorse his nomination.

Airdrie resident Mike Loughman is hoping the community will support his nomination for the Lieutenant Governor of Alberta’s True Grit award by sending in emails of endorsement before the deadline of June 30. Loughman was nominated for the award – which he said is presented annually to someone who has overcome mental health or addictions obstacles to help others in the community – last year, by Kim Titus with the Thumbs Up Foundation. Although he was not the recipient of last year’s award, he attended the ceremony and introduced himself to the Lieutenant Governor, who he said informed him he would be considered for this year’s award. “She asked me to get letters of support, so the mayor has written a letter, and some of the council members and (Airdrie MLA) Angela Pitt is writing a letter, so I have some support there,” he said. “But since Airdrie City View readers nominated me Best Citizen last year, I figured I must have made an impression on someone.” Since recovering from his own struggles with addiction in 2014 and seeking treatment for the mental health illnesses he was diagnosed with in 2012, Loughman has been an active volunteer within the community – raising more than $40,000 for various charities and helping other people get and stay sober. “I do a bunch of things, but fundraising is the most important one – I really just love volunteering,” he said. “Having been dealing drugs for 17 years, I felt like I owed the community something and I wanted to give back. That’s why I started, at first, because I felt like I had to, but now, I do it because I want to.” Before he was diagnosed, Loughman said he struggled through overdoses and suicidal thoughts, as well as the overdoses and suicides of his friends. After going to the hospital and a recovery centre, he realized instead of self-medicating with drugs and alcohol, he could do something more proactive to address his mental health challenges. “That’s what really sparked me – now that I know what’s wrong, I thought, now I can do something to address it,” he said. “That’s mainly why I choose to support mental health charities, because that’s what changed my life. And when I reached out for help, there were people there for me, and I didn’t think anyone would be there. That’s why I like to be there for people now, when they reach out.” His effort hasn’t gone unrecognized. Since getting sober, volunteering and starting his own business to help people achieve their own sobriety, Loughman said he’s received nominations for awards he didn’t even know existed – including the Soul of Airdrie award – and titles like Best Citizen and Newsmaker of the Year. “I’ve been blown away,” he said. “It just goes to show that no matter where you come from, if you put in the effort and make a change, people are willing to see you for the new you.” Loughman encourages anyone he’s helped out or inspired to send an email supporting his True Grit nomination to execdir@LGCircleAlberta.ca by June 30. The awards will be presented to winners at a ceremony in September. “This is kind of a big deal,” he said. “Just being nominated is really cool, and it would be an absolute honour to win. If I have that credibility backing me up, it really brings attention to what I’m doing, and gives me the momentum to keep on doing it.”