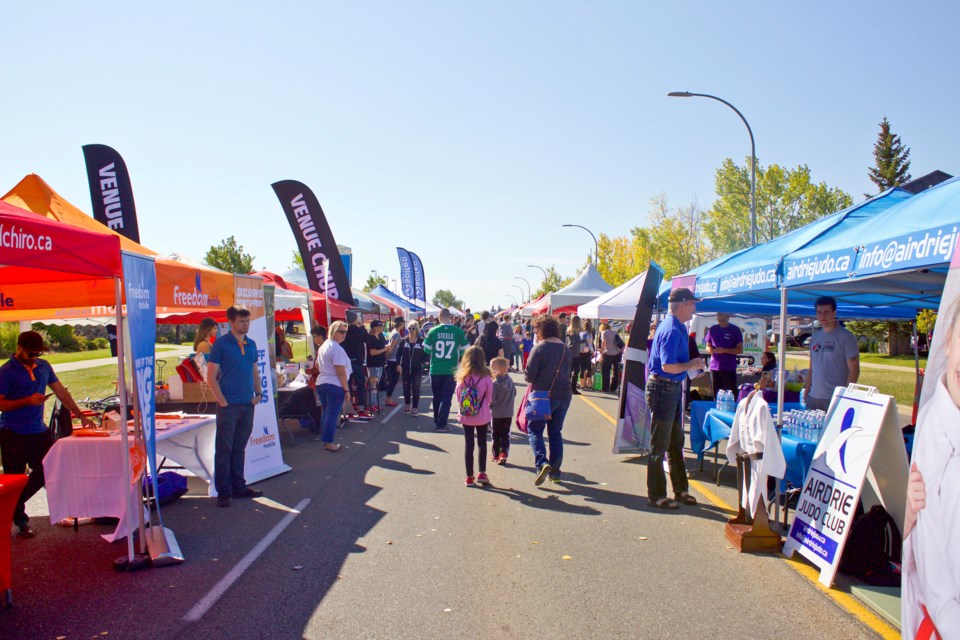 airdrieFEST 2019 – Sept. 7 from 11 a.m. to 4 p.m. outside City Hall – will include more than 270 vendors, activities for children, food trucks, live entertainment and a special giveaway for Airdrie's 100th birthday. File Photo/Rocky View Publishing

Airdrie will celebrate the community and its 110th birthday Sept. 7 at the 10th annual airdrieFEST.

"airdrieFEST has so many great opportunities for people," said Rebecca Nielsen, community developer with the City of Airdrie. "So, depending on who you are, and what you're focused on, what your interests are, there is something for everybody at airdrieFEST."

More than 270 non-profit and business vendors will set up booths outside City Hall from 11 a.m. to 4 p.m. during the street festival, along with activities for children, food trucks and live entertainment.

"I am really excited about the fact that this is the city's 110th birthday, and it lines up with airdrieFEST's 10th birthday," Nielsen said.

As part of the birthday celebrations, the City will be giving away gifts to the first 800 families at the festival, according to Nielsen, which she described as "meaningful and worthy of display."

"I'm not going to give too many details [about the giveaway] because we want it to be a surprise," she said.

Though Nielsen didn't know all the details of what's planned for the Family Fun Zone, run by Community Links and the Airdrie Public Library, it will include oversized family-favourite games.

There will also be a petting zoo, courtesy of the Airdrie Boys and Girls Club; train rides provided by the Airdrie Festival of Lights; and wood carving demonstrations by local artist Eric Proulx.

"Airdrie is a family community, really. We're very young community, and there are lots of young families. That's really part of the reason there is [a family-friendly] focus," Nielsen said.

She said the event has evolved from a small event to give residents the opportunity to sign up for different sporting organizations or recreation opportunities for children.

"And then, over the years, it became something that grew out of that to include not-for-profit groups and businesses that operate in Airdrie and just outside of Airdrie," she said. "And just to share information with Airdrie residents about what's available, locally."

The activity from the street festival does require Main Street be closed between Airdrie Mainstreet Square and just south of ATB Financial, according to a release from the City. The stretch will be closed to traffic from 7 a.m. to 5:30 p.m.; however, the City said access to the Alberta Health Services Urgent Care Centre will not be impacted.

Jenelle Wohlberg, communication advisor with the City, said the best bet to avoid parking nightmares is to walk, ride a bike or find alternative means of making your way to City Hall.

"Parking will be tight and a bit of an issue," she said.

Volunteers are a key part of the continued success of airdrieFEST, Nielsen said, and the more help for the day-of, the better. To register as a volunteer, visit volunteerairdrie.ca

For more information on the festival, visit airdriefest.ca