An Airdrie restaurant will donate a full day’s worth of revenue to assist those impacted by a recent explosion in Lebanon. On Aug. 15, Xtreme Donair will donate 100 per cent of its proceeds to the Lebanese Red Cross.
Aug 14, 2020 7:00 AM By: Ben Sherick 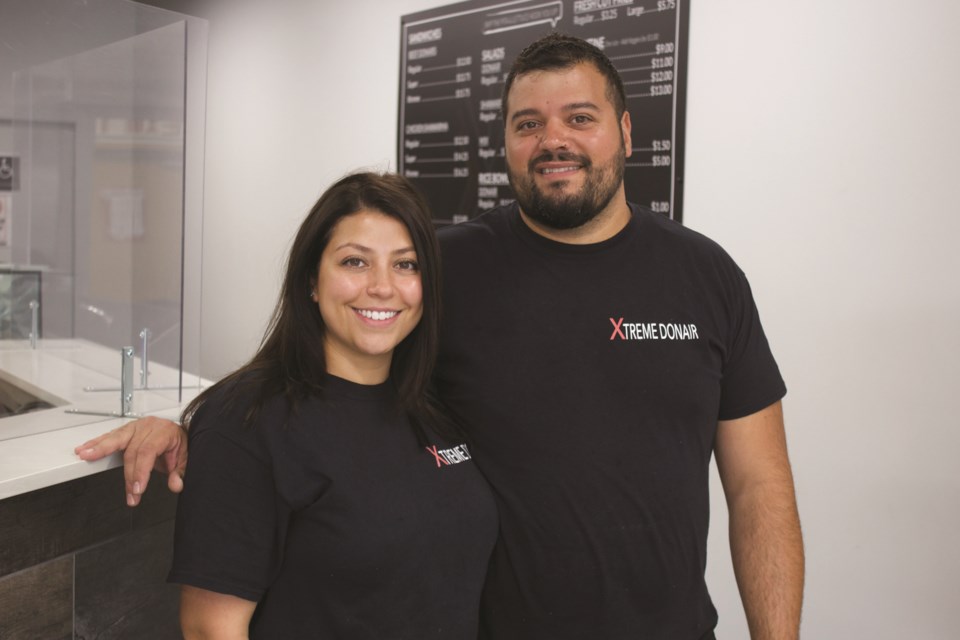 Fatima and Marwan Sleiman, co-owners of Xtreme Donair, will donate all their restaurant's Aug. 15 proceeds to the Lebanese Red Cross. Photo by Ben Sherick/Airdrie City View

An Airdrie restaurant will donate a full day’s worth of revenue to assist those impacted by a recent explosion in Lebanon.

On Aug. 15, Xtreme Donair will donate 100 per cent of its proceeds to the Lebanese Red Cross.

“Everything that comes through that door, every penny that is made is going to donations,” said Fatima Sleiman, who co-owns the restaurant with her husband, Marwan.

On Aug. 4, an explosion devastated Beirut, Lebanon’s capital city. According to the Canadian Press, the explosion is believed to have been caused by a fire that ignited a 2,750-ton stockpile of ammonium nitrate, which had been stored inside a port warehouse since 2013.

Canadian Press reported the explosion caused an estimated $10 to $15 billion worth of damage and left nearly 300,000 people homeless. According to the BBC, the death toll as of Aug. 10 was estimated at more than 220 people, with 110 people still missing.

According to Sleiman, the cause is “near and dear” for both her and Marwan.

“Both our families are from Lebanon, and we also have family back home there,” she said. “We can’t go over there right now and help out, so this is the only way we can [help out] at this moment in time.”

"I lived there for seven years," Marwan added. "Even though I was born in Calgary, I do have roots back there – my grandfather, aunts and uncles, cousins. Everybody's been affected by what's happened."

According to the Sleimans, their family in Lebanon is currently safe.

“As a proud Lebanese Canadian citizen, being away from my homeland during these devastating times is pure torment,” Marwan wrote in the post. “Wishing I could be there on ground zero to aid and assist.”

Since posting about the fundraiser, Sleiman said the restaurant has received positive feedback from the community, with many people indicating they plan to eat at the restaurant in support – some coming from Calgary, Lethbridge and Red Deer, she said.

“We’ve also had about four or five customers…come in and just donate, because they aren’t able to make it on Saturday,” she said. “We’ll just add that to the pot.”

Marwan added customers will be able to donate above and beyond the cost of their meal.

"We're already getting people donating right now, and it's not even Saturday," he said. "People that aren't going to be around are already donating whatever they can. People are donating to their ability...if it's just a meal, that's great. If they want to give more, absolutely."

Sleiman acknowledged that, like many local businesses, Xtreme Donair has faced financial challenges because of the COVID-19 pandemic. But she said that doesn't mean the restaurant can't still give back.

“We’re still fortunate to live a country that aids us and assists us when we need it," she said. "No one ever got poor by donating and lending a helping hand. One day is not going to destroy us.”

According to Sleiman, this is the first time the restaurant will donate an entire day’s proceeds to a charitable cause.