For the last three weeks, Airdrie’s Muslim community has been observing Ramadan – the holiest month in the Islamic faith.
May 5, 2021 10:00 AM By: Scott Strasser
Previous Next
While some mosques remain open with capacity restrictions, Muslims must adhere to physical distancing guidelines. File photo/Airdrie City View
Expand

For the last three-plus weeks, Airdrie’s Muslim community has been observing Ramadan – the holiest month in the Islamic faith.

This year, Ramadan takes place from April 12 to the evening of May 12. Throughout the 30-day observance, Muslims fast, pray, read the Holy Qur’an daily and engage in additional charitable opportunities, among other spiritual practices.

“During the month, Muslims fast each day from dawn to dusk,” explained Sairah Khan, the charity coordinator of the Ahmaddiya Muslim Women’s Association of Airdrie (AMWAA). “They fast because fasting is prescribed to all Muslims in the Holy Qur’an, and we follow the teachings of the Holy Qur’an.

“It’s a pillar of Islam and an act to get closer to God through prayer and contemplation.”

At sunset every day, Muslims break their fast with an evening meal, called iftar. Then, after waking before dawn, another meal ­– sahoor – is eaten. Sahoor is the final meal Muslims eat before the day’s fast begins.

Khan said Ramadan is a time of spiritual reflection and self-improvement for Muslims. She added the month's practices help Muslims renew themselves for the rest of the year.

“In this month, Muslims are urged to look after the poor and needy more,” she said. “They do so regularly during the year, but more so in this month, because fasting obviously reflects hunger and pain, so we try to reflect on those hardships.”

Like virtually every other aspect of life, the COVID-19 pandemic has impacted the observance of Ramadan in the last two years. According to Khan, the previous large gatherings for prayer and iftar that Muslims enjoyed before the pandemic have been replaced by individual or family observances.

“During pre-COVID times, we would attend the mosque and listen to sermons regularly,” she said. “We were meeting on a daily basis during Ramadan and obviously breaking our fast together in the mosque as well as our community.

“Unfortunately, we couldn’t do that last year and we haven’t been able to do it this year. Obviously, for Eid prayers as well, we get together in large gatherings and go to each other’s houses to wish a happy Eid, and none of that, unfortunately, is going to happen this year.”

In addition to daily fasting and prayer, an important aspect of Ramadan is that Muslims increase their charitable donations. 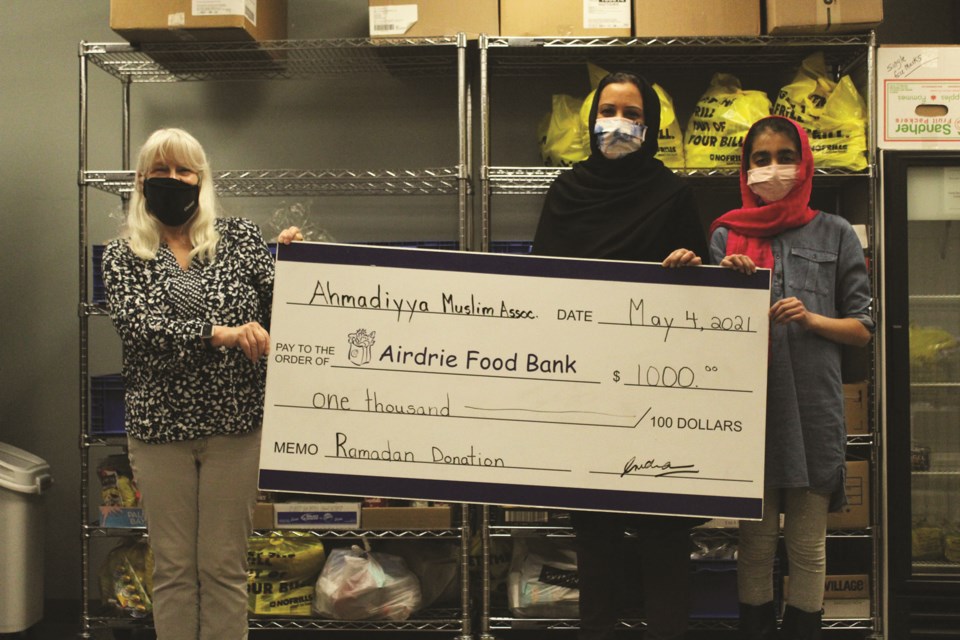 (From left to right) Lori McRitchie, Sairah Khan and her daughter Mahrosh proudly hoist the Ahmaddiya Muslim Women’s Association of Airdrie's cheque for $1,000 for the Airdrie Food Bank on May 4. By Scott Strasser/Airdrie City View

As part of this, Khan said members of AMWAA raised $1,000 this Ramadan for the Airdrie Food Bank – a donation the charity received on May 4. She added this is the third year AMWAA has raised money for the food bank.

“The first year, we were able to donate food and a donation,” she said. “Last year, to make it contactless, I urged the ladies to do a monetary donation and that was successful. This year, because of the restrictions, we again did a contactless monetary collection and raised $1,000 to give back to our community.”

While fasting is an important aspect of Ramadan, Khan said one exception to the rule this year has been when Muslims receive their COVID-19 vaccines.

To accommodate Muslims’ fasting schedule, the City of Calgary announced April 30 it would be expanding the hours for its vaccine clinic at the Genesis Centre in northeast Calgary for the final weekdays of Ramadan. According to a press release, from May 4 to 10, the clinic will be open daily from 8 a.m. to 11 p.m. to allow Muslims to access their vaccines after sundown, thus not breaking their fast.