The Johnson Multiple Sclerosis (MS) Bike ride from Airdrie to Olds will take place June 23 and 24, and for many, it’s an opportunity to make a difference for the people in their lives who are affected by MS.
0
Jun 14, 2018 12:01 AM By: Airdrie City View 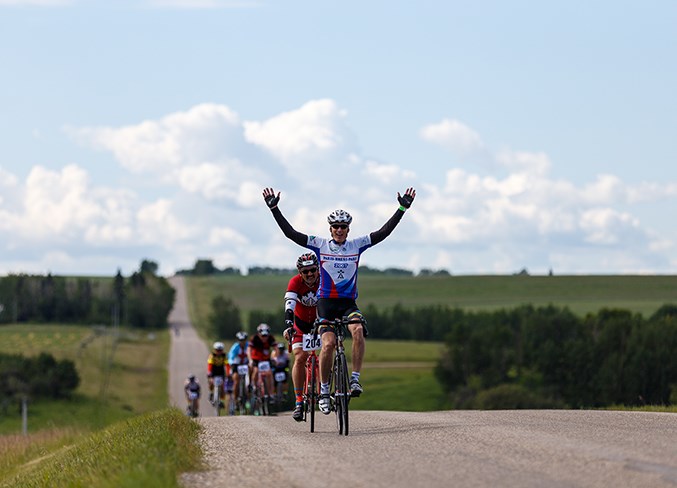 The Johnson MS Bike — Airdrie to Olds starts June 23 along Highway 567, with the halfway point at Olds College. Bikers stay overnight before finishing the 180-kilometre route in Airdrie.

The Johnson Multiple Sclerosis (MS) Bike ride from Airdrie to Olds will take place June 23 and 24, and for many, it’s an opportunity to make a difference for the people in their lives who are affected by MS. One such person is Mike Rollins, whose mother-in-law, Wendy, has MS. Rollins and his wife’s family have participated in the MS Walk for years, but he said he felt he could still do more to help. Five years ago, he joined the 180-kilometer (km) bike ride from Airdrie to Olds. “The second day, when everybody’s getting back on their bikes, and we’re all sore and complaining that we have to get back on there – that’s probably how (Wendy’s) day starts,” Rollins said. “Usually, when she wakes up, first thing in the morning, her whole entire body is aching and it’s hard for her to move around. We get better.” MS is a disease that affects the central nervous system, including the brain and spinal cord. Symptoms are unpredictable and wide-ranging, but can cause vision problems, impaired speech and paralysis. Approximately one in every 385 Canadians live with MS, according to the MS Society of Canada. “She ends up crying every time we go out because she feels bad that we’re going through so much for her, but we tell her, ‘I’m going to be in a little bit of discomfort for two days. You’re in discomfort every single day. It’s easy for me,’” Rollins said. Last year, the MS Bike Tour raised $8.5 million nation-wide. The Airdrie to Olds ride raised $620,000 to help support local researchers, but also for the local MS Society of Canada station, which provides programs and services to those living with MS. “I really love seeing people come together, and the support they give each other throughout the weekend,” said Paula Miller, the Airdrie to Olds MS Bike manager. “People tell their stories, and share with everyone in the tour why they ride…I think that’s really special.” Rollins said he always shares Wendy’s motto with other riders: “I may have MS, but MS doesn’t have me.” For him, it’s not just about the research, but helping to support and expand the types of services his mother-in-law can access. Each year when he shows up for the cycle, Rollins said the MS Society briefs riders on the progress that was made throughout the year, and where their money went. “It feels really good to know that you did make a difference last year, and this year, we’re going to make another difference,” he said. The ride takes place June 23 and 24. Anyone is welcome to cheer on the finishers June 24 at the TransCanada Service Centre between 12 and 4 p.m. So far, the MS Society has reached 70 per cent of their $588,000 goal. Almost 600 cyclists are currently registered, but registration is still open. For more information, visit msbike.ca