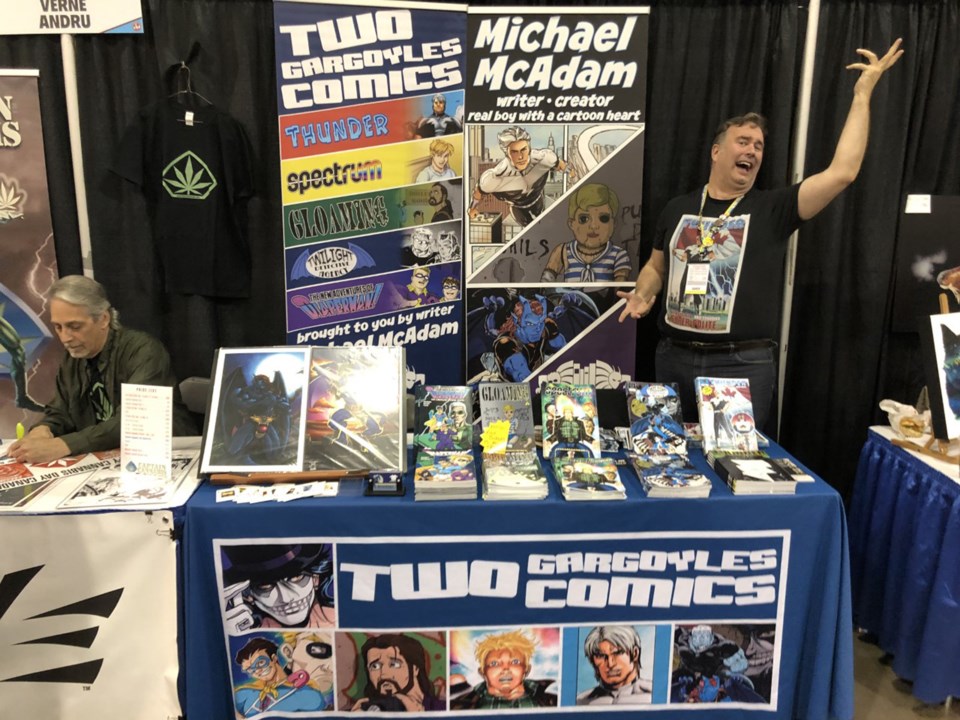 Airdrie-based comic writer Michael McAdam was on vacation with his friends in Orlando, Fla., when he and Calgary illustrator Kyle Burles came upon an abandoned motel. The facility instantly gave McAdam and Burles an unsettled vibe, with its coffin-shaped pool, creepy gazebo and a large gathering of seemingly-homeless cats.

As fans of the horror genre, the two looked knew this would be the inspiration for their next book.

“It was the coolest, creepiest thing ever,” McAdam said. “There was so much inspiration there,”

McAdam and Burles each took a number from one of the hotel rooms to bring back as souvenirs to display in their homes. McAdam said once they got back, they started working together on Gloaming – a small-town horror about a rock ‘n’ roll journalist working to track down a child prodigy everyone else claims doesn’t exist.

McAdam has been writing comic books since 1996, he said, and has worked with different illustrators on a variety of projects. But, he added, it was particularly fun working with Burles on this series. McAdam wrote the comic, while Burles brought the story to life through his illustrations. McAdam said they both drew inspiration from the motel, their experiences and their pop-culture preferences.

“We both come at it from different directions. I like supernatural, [Burles] likes serial killers and insanity – like the mental madness aspect of it,” he said.

As an independent comic publisher, McAdam works until the title Two Gargoyles, which refers to himself and the illustrator he is working with at the time. He said he mostly sells his comics locally, including at several stores in Calgary. McAdam said her writes the stories he, as a horror-comic fan, would like to read ­– something that appears to resonate with readers.

“I'm not saying that I have an audience of thousands of screaming fans, [but] even just one person saying, ‘I can't wait for the next one,’ is a huge thing and makes it all worthwhile,” he said. “You don't even know if people are listening or reading or if they care. Then, some stranger will come up to you and say, ‘I saw your thing,’ or, ‘I heard your thing,’ or, ‘read your thing and I really liked it.’”

McAdam said he has been surprised with the support from the area. The local scene is growing, he said, and is now supported by events like the Calgary Comic and Entertainment Expo and the Calgary Horror Convention.

“A convention, the size of the Calgary Expo was so wonderful because I grew up going to smaller conventions in Calgary in the ‘80s. There was this feeling [that] Calgary isn't big or important enough in the comics world to ever have a big convention,” he said. “I'm just really glad that the organizers of the Calgary Expo thought differently and proved to the world that Calgary's a destination no matter what the topic is.”

He said the Calgary comic book community can be “vanilla” at times, but is often open to reading and trying new things.

“Let's say that Calgary is optimistic, but cautious. You have to sort of lead them to different ideas,” he said.

For example, McAdam said, his superhero books are well-received, but some of his books, such as Gloaming and Spectrum – an LGBT series – usually attract niche groups. He said that makes it fitting Gloaming’s third issue will be released at the Calgary Horror Convention June 22 to 23.

“The Calgary Horror Con is an amazing surprise for conventions because it is geared specifically towards horror,” he said.

To find out more about McAdam, Two Gargoyles or to purchase comics, visit twogargs.com