After a signature event was cancelled earlier this summer, members of the Airdrie 4H Beef Club turned the setback into a chance to give back to the community.
Oct 9, 2020 7:00 AM By: Ben Sherick 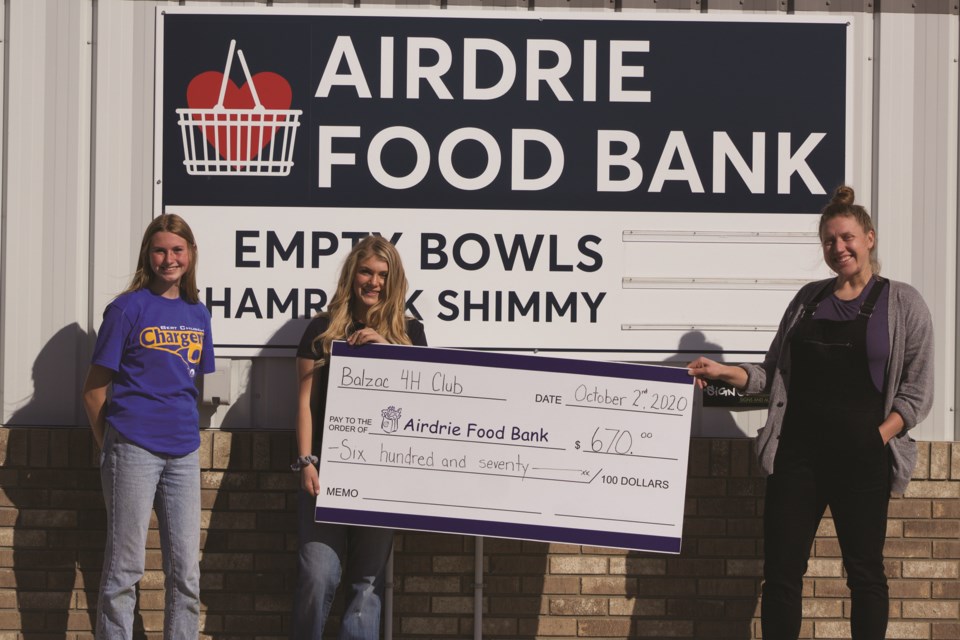 After a signature event was cancelled earlier this summer, members of the Balzac Beef 4-H Club turned the setback into a chance to give back to the community.

On Oct. 2, Sadie Henn, 17, and Elle Groeneveld, 14, presented the Airdrie Food Bank (AFB) with a donation of $670. The funds came from the sale of cattle the club members raised.

“Each year, we raise a beef project – our club’s a beef club,” said Henn, the club’s president. “When we sell them, we usually get premium price through 4-H, so one per cent of each member of our clubs’ steers goes back to the food bank.”

According to Groeneveld, the club’s secretary, 4-H members get the animals as calves. Depending on when they’re purchased, they usually weigh between 700 to 800 pounds.

“That’s in November,” she said. “All the way through June, you feed them every day and night.”

To prepare to be shown at 4-H events, the animals have to first be washed, Groeneveld said. Henn added the animals also have their hair trained by 4-H members.

“It’s better if you can get them fluffy,” Henn said.

Both Henn and Groeneveld each raised a steer and a heifer, which were sold during the summer.

“Usually our sale is on June 1 after the big show in Calgary called 4-H On Parade, but this year, that was cancelled,” Henn said.

Instead, the cattle were sold through “private treaty” this year, meaning each seller found a buyer themselves rather than selling at a sale, Henn said.

Usually, according to Groeneveld, the four-day 4-H On Parade brings 4-H clubs in the Calgary district together. Competitions are held where each animal – whether it’s a cow, horse or sheep – is judged.

“At the very end, we sell all of the steers or any of the market animals,” she said.

Groeneveld added 4-H On Parade is also a social event, allowing 4-H members the opportunity to connect with friends from other clubs.

The cancellation of the event was disappointing for club members, Henn said.

“You get a steer and you look forward – you put a lot of work into raising them and getting them ready,” she said. “It’s kind of disappointing when we can’t go into the shows.”

Despite the disappointment, the teenagers kept their outlook positive. Henn said the cancellation of the annual event led to a “good learning opportunity.”

“This way, we had to get a little more creative [in lining up buyers] and work on our marketing skills,” Henn said.

Both Henn and Groeneveld said the donation was an important way to support an organization that provides a crucial service to Airdrie.

“I think its important to stay involved in your community,” Groeneveld said. “Wherever you go in life, you know you’re giving back.”

“I think the food bank’s probably struggling through COVID, so it worked out that we were able to help them out during this tough time,” Henn added.

Meghan West, programs manager with Airdrie Food Bank, said the donation is just one example of the varied sources of support AFB receives.

West said AFB tries to foster life-long service and volunteering when it engages with local students, and the donation is exciting because it comes from a group of youth.