Marwan Sleiman has seen many changes in Airdrie since opening his Lebanese restaurant more than 16 years ago, but waning community support is not one of them.
Sep 20, 2020 1:00 PM By: Kate F. Mackenzie 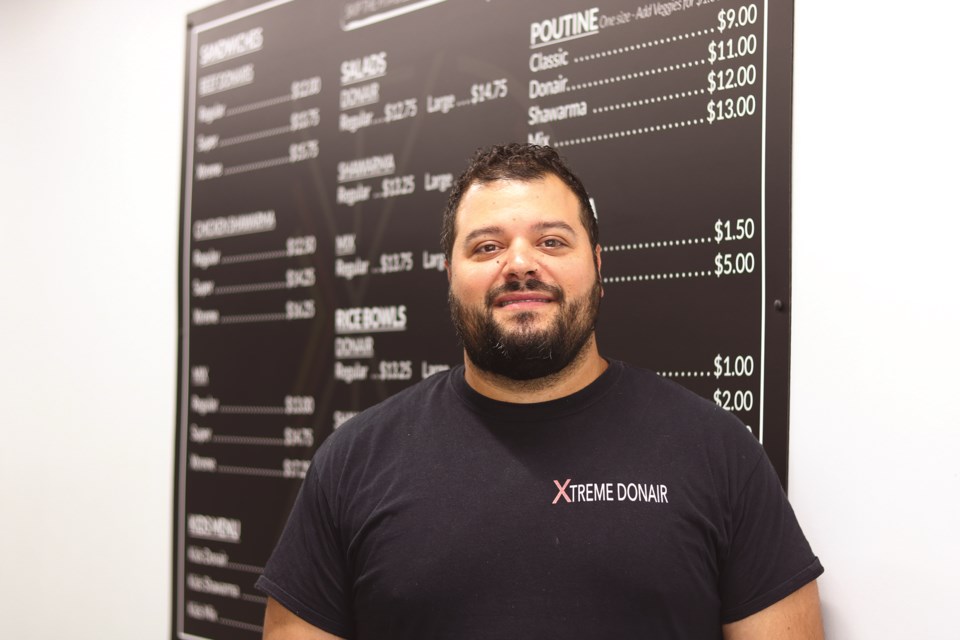 Marwan Sleiman has seen many changes in Airdrie since opening his Lebanese restaurant more than 16 years ago, but waning community support is not one of them.

“Without the support of the community, and Airdrie in general, I wouldn’t be here,” said Sleiman, who co-owns Xtreme Donair with his wife Fatima. “We’ve been through so many recessions in Alberta and we’ve managed to still thrive because of our great customers.”

The restaurant’s history in Airdrie has formed a bond with its customers that makes them like family, he said, and throughout the years Sleiman’s seen families expand, kids grow up, people get married and sadly, some good customers pass away.

But loyal patrons are only part of Sleiman’s success and the reason why his restaurant won Gold for Best Donair in the Best of Airdrie Readers’ Choice Awards. His recipe is also to thank.

“It’s a homemade product. Everything is fresh,” he said. “We basically do what most people aren’t doing, and we are different than everybody else because we do make everything in the store.”

The ingredients are freshly marinated, seasoned, chopped and mixed together by Sleiman himself.

“Because we make it in the store, there’s no filler and no additives,” he said.

Sleiman said the donair recipe is similar to the one used by his dad and uncle. Later, when a friend opened a donair restaurant, Sleiman collaborated with him and came up with the recipe Xtreme Donair uses today.

Although Sleiman’s restaurant now has a winning donair mix, he said when he first opened his doors, he was 23 years old and didn’t know anything about running a business.

“You learn as you go. I got laid off from field aviation,” he said. “I wanted to open a restaurant and thought, what better chance do I have to open it?”

Airdrie’s population has more than doubled in size since Xtreme Donair opened in 2004, and he said the appetite for ethnic food has also increased.

“I had even more ethnic food then, but I got rid of it because people didn’t know what it was,” he said. “They do now, which is awesome, but we adapted to what Airdrie wanted.”

According to Sleiman, Airdronians have far surpassed their modest 2004 appetite for ethnic food, especially on Aug. 15, when the Sleimans' donated all the profit they made to the Lebanese Red Cross in support of relief efforts following an Aug. 4 explosion in Beirut.

“We expected it to be busy, but I didn’t expect that much support,” he said. “I’ve got great customers. At one point, my customer told me the line-up was all the way to the Goodwill store. We actually had to stop the line-up because we were running out of food.”

Sleiman said he’s still tired from that day, but it was well worth the almost $10,000 donation.