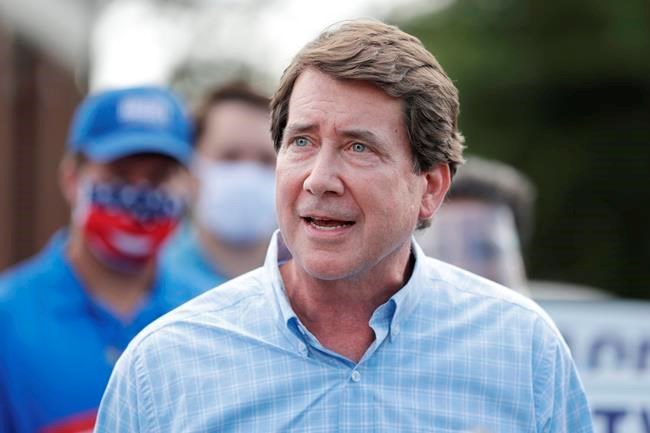 The Nashville businessman emerged from a tough challenge from trauma surgeon Manny Sethi to clinch his party’s nomination for the seat of retiring Republican Sen. Lamar Alexander.

Hagerty will face the still undetermined winner of the Democratic primary in the November election.

Last July, Trump let Tennessee voters know he would back Hagerty for the seat, months before Hagerty declared himself a candidate. Sethi had already been running for about a month when Trump’s tweet turned the contest upside down.

Hagerty proceeded to ignore Sethi for most of the campaign, until back-and-forth attacks opened up a few weeks ago and never slowed down. Hagerty leveraged Trump’s endorsement to brush back attacks on his previous business and political ties to Mitt Romney, who was once the GOP presidential nominee and now, according to Hagerty, is a “weak-kneed” Republican senator who voted to convict Trump during the impeachment trial.

Hagerty had other big political names on his side beyond Trump. He had endorsements from Mike Pence, Senate Majority Leader Mitch McConnell, former U.N. Ambassador Nikki Haley, Sen. Marsha Blackburn of Tennessee and Sen. Tom Cotton of Arkansas, while others backed him with campaign cash, including Sen. Alexander through his PAC and former Gov. Bill Haslam, for whom Hagerty served as state economic development commissioner.

Hagerty spent more than $9.6 million on the race through mid-July, compared to the $4.2 million spent by Sethi. Several million more dollars combined have been spent by outside groups on both sides.

The coronavirus pandemic took in-person campaign events off the table for a couple months, and the continued outbreak kept Trump from showing up for what initially seemed like a guaranteed visit on Hagerty’s behalf.

Donald Trump Jr. made the trip in January before COVID-19 hit. The president and several others from his inner circle instead opted to join Hagerty and supporters for tele-town halls. Trump headlined two of them, including on Wednesday night hours before Election Day polls opened.

Sethi’s most notable endorsements were from Sen. Ted Cruz of Texas and Sen. Rand Paul of Kentucky.

The race also came and went without a debate between the two main candidates. Few policy disagreements rose between them. Additionally, both opposed requiring masks in public to combat COVID-19, and their campaign events often featured few attendees in masks. The candidates themselves were often unmasked when posing for photos with supporters.

Republicans are heavily to keep the seat, considering the GOP has held both Tennessee Senate seats since 1994.